Teddy Roosevelt's Kids Saved Christmas As We Know It 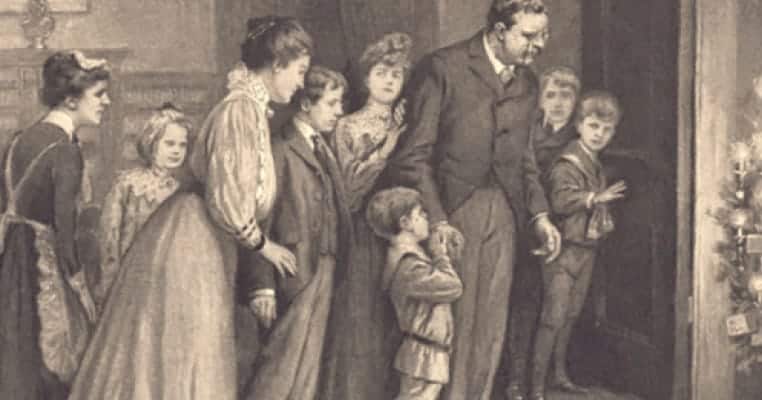 Teddy Roosevelt’s Kids Saved Christmas As We Know It

During Theodore Roosevelt’s time as President of the United States, he made a lot of progress in land conservation and the founding of US National Parks. However, he almost made the mistake of banning Christmas trees from American tradition. If it were not for the help of his children, our holiday traditions may have turned out very differently today.

In The 1800’s, Christmas Trees Became An American Tradition

However, it did not catch on in the United States until the mid-to-late 1800’s. The very first Christmas tree to be set up inside of the White House came from the 14th President of the United States, Franklin Pierce in 1856. The tradition was not carried on every single year, because in the 1800’s, many people disapproved of using Christmas trees. They considered them to be a pagan symbol, and since the holiday was supposed to be about the birth of Jesus Christ, so many conservative Christian people did not think that this was an appropriate way to celebrate the holiday.

Despite this criticism, the tradition eventually became more popular as the years went on. Most people did not put up a Christmas tree unless they had children, since it was seen as something for young kids to stare at while they opened their presents from Santa. Grover Cleveland became the first President to hang electric lights on a Christmas tree in 1895. In photographs, we can see how beautifully the Cleveland family decorated the second floor Oval Room with dolls for their daughter to find from Santa on Christmas morning.

The very first Christmas tree farm started in the United States in the year 1901. Over 25,000 Norway Spruce trees were planted at a farm in Trenton, New Jersey. But it takes years for trees to grow. In four years, a Christmas tree is only one foot tall, so they could not begin selling trees until the year 1980. One farm could not supply trees to the entire country, anyway, so it would take decades before Christmas tree farms were all over the country. Up until the 1930s and 40’s, the majority of people still went into the forest to find a pine, spruce, or or fir tree, cut it down, and take it home with them. Artificial Christmas trees did not begin to boom until the 1950’s.

Theodore Roosevelt and his wife absolutely loved Christmas, but he was concerned about conserving the national parks and forests. He did not want Americans to carry on the tradition of cutting down Christmas trees, because he believed that the trees were too precious. He told his children that they were going to set a good example for the rest of the country by refusing to have a tree in the White House. He ordered the U.S. Forest Service to contact newspapers around the country to discourage Americans from cutting down Christmas trees. Many people began to have the opinion that cutting down a tree that was alive for years just to enjoy it for a couple weeks was incredibly wasteful and irresponsible. 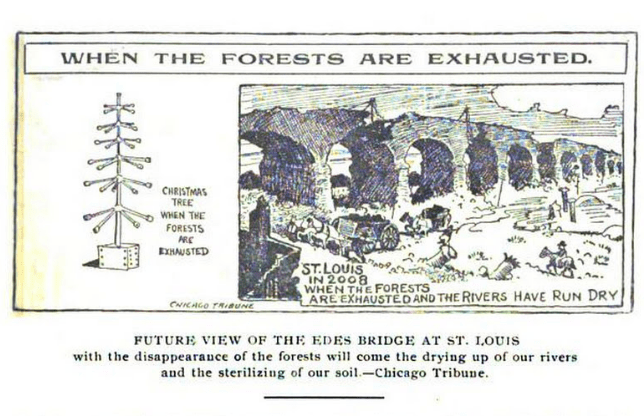 The U.S. Forest Service did the job of spreading the word that cutting down Christmas trees was irresponsible for the environment. In a 1902 edition of The Hartford Courant, one article said, “the green has become a nuisance, there is so much of it. Everything from a church to a saloon has to be decorated. The result is that the woods are being stripped and an altogether endless sacrifice is going on, not in obedience to any real need but just to meet the calls of an absurd fad.”

In 1901, the Roosevelt kids moved into the White House, and they were able to enjoy a Christmas tree at their cousin’s house, even though they did not have one in their new home. However, the next year, their father announced that they would not have a Christmas tree, because it was far too wasteful.

In 1902, Archie Roosevelt’s birthday fell near Christmas, and all he really wanted was a tree to open gifts. Archie went out on the White House lawn and cut down a Christmas tree. They smuggled the tree into the White House and propped it up inside of a small sewing room. The White House handyman helped the boys add the lights to the tree, and their aunt helped find the decorations. On Christmas morning, after everyone was gathered to open their presents, Archie surprised his family by opening the door to reveal the beautiful Christmas tree. Since he did not have a lot of ornaments available for him to use, so the sweet little boy hung presents for every member of his family, which included every one of the pets.

There are several different versions of the story as to what happened next. Some say that President Roosevelt was touched by 8-year-old Archie’s ingenuity and Christmas spirit, and it was, after all, near his birthday, so he let it slide. Others say that he tried to lecture his kids about the importance of forest conservation.

In 1906, Teddy Roosevelt wrote a letter to his sister to say that every year from then on, both Archie and his brother Quentin took it upon themselves to put up a Christmas tree in the children’s play room, and they would make sure to have full stockings and presents hanging on the tree, like they had in previous years. Other years, Archie would even surprise his parents by setting up a tree for them that was a surprise on Christmas morning. This kid seriously loved Christmas!

Despite all of the heart-melting cuteness of his son putting up Christmas trees, President Roosevelt still needed to clear his conscience, since it was pretty hypocritical to denounce Christmas trees and yet allow his own kids to have them. He called up one of his fellow conservationists, Gifford Pinchot, from the US Forest Service. He asked his opinion on the situation, since he knew far more about forestry, and how much of an impact cutting down Christmas trees actually had on the environment.

Pinchot said that if people cut down the tallest and oldest trees for their homes, it actually helps the small trees grow. At that time, a lot of people would cut down 2 or 3 foot Christmas trees, because they were easier to carry out of the woods. This advice is mostly likely why today, it is far more popular to have a 6-foot tree, instead. Once he learned this news, Roosevelt retracted his decision to cancel Christmas trees, and changed his tune to encouraging people to cut a large tree, so long as it is done responsibly. After learning this, he stopped trying to tell American citizens that they cannot have their Christmas trees during the holidays.

In 1903, the Roosevelts hosted their first Christmas Carnival on the White House lawn. There were six kids in the Roosevelt family, and 300 other children of the White House staff and government officials living in Washington DC were invited to participate in the festive winter wonderland. There were games, dances in the White House ballroom, and a huge dinner for the guests. For dessert, everyone got to eat an ice cream sundae in the shape of Santa. It would seem that the Christmas spirit was in full force, and the family continued to decorate and enjoy the holiday to the fullest extent.

Today, the National Parks Service allows families to go and cut down their own Christmas tree on public land if they have a permit. Certain municipalities even offer a Christmas tree recycling service to help get rid of any waste after the holidays are over. For people who prefer to have a live Christmas tree, they usually purchase them from farms, which has dramatically cut down from tampering with the wild.

The National Christmas Tree now stands in front of the White House every year, and it has a public lighting ceremony. None of it may have happened if it were not for the Roosevelt kids trying to save the tradition forever.

Christmas Trees. US Department of Agriculture.