St. George and Beyond: 12 Dragon-Slayers from Around the World

St. George and Beyond: 12 Dragon-Slayers from Around the World 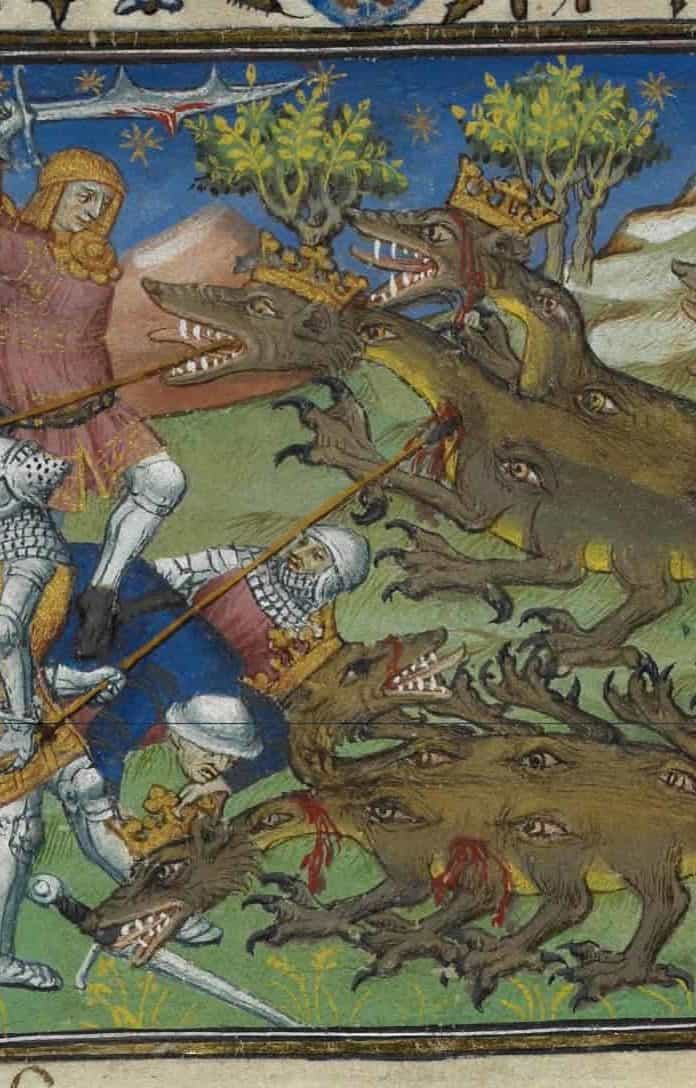 Dragon legends are recorded all over the world, from the seas of Japanese folklore to the icy climes of Northern Europe. Their ubiquity in world mythology is still something of an enigma: how can they be present in the ancient legends of disparate cultures which were not in contact until the last few hundred years? For the fanciful, this suggests that dragons existed or, indeed, continue to exist unnoticed. For the historian, it suggests new possibilities for knowledge being exchanged along trade routes, as travellers voyaged further East or West and encountered others with oral stories passed from further afield.

Scientists have suggested that the legends came from people trying to explain giant fossilised bones which were occasionally dug up; after all, mammoth tusks caught in fishing nets in the English Channel were seen as evidence for elephants on Noah’s Ark. Anthropologist David E. Jones alternatively suggests that evolution embedded an innate fear of predators into the human subconscious, resulting in independent dragon mythologies. As fascinating as the topic is, however, nothing quite beats the stories of dragon-slayers, also ubiquitous around the world. Here we discuss a dozen of the best, including both the most famous and the lesser-known.

Where else to begin our quest for dragon-slayers but the most famous of all, St. George? George is the patron saint of several countries and numerous cities around the world, and numerous churches and monasteries are dedicated to him. The historical George (AD 256–285 to 303) was a Christian soldier of Greek origin. He was an officer in the Guard of the notoriously anti-Christian Emperor Diocletian, who put George to death by beheading for refusing to recant his faith. George was venerated as a martyr, and the earliest records of churches dedicated to him date to the 4th Century.

The dragon episode is not recorded until the 11th Century, and here we will follow the most famous version, taken from Jacobus de Voraigne’s Golden Legend of the 1260s. The city of Silene in Libya was plagued by a dragon that lived in a pond. The dragon would emerge every day, poisoning people with its foul breath, and would only desist when given 2 sheep to eat. Unfortunately, Silene ran out of sheep, and had to start giving the dragon people instead. All the young people were forced to enter a lottery to decide who should be the beast’s dinner.

Alas, one day the lottery was won by the king’s daughter. She was dressed in bridal vestments and left to wait for the dragon. As she shivered in terror by the pond, a young knight by the name of George happened to pass by, and asked what she was doing there. She explained her terrible fate, to which George replied, ‘Fair daughter, doubt not, for I shall help you in the name of Jesus Christ.’ When the dragon emerged, spying its dinner, George made the sign of the cross, spurred his horse, and ran the beast through with his spear.

George instructed the young maiden to tie her belt around the injured dragon’s neck, and it meekly followed them into Silene like a lapdog. The locals fled in fear at the sight of their terrible adversary, but George promised to kill the dragon if they would only agree to be baptised. After 15, 000 accepted the Christian faith, George decapitated the poor dragon, which was so large that it had to be taken away by four carts to be dumped at a safe distance. A church was founded in Silene and dedicated to the town’s saviour and the Virgin Mary.

It is easy to see the appeal of the legend to medieval Christians. The anachronistic tale casts George as a knight of medieval romance, heroically rescuing a beautiful maiden and valiantly defeating a vicious dragon. de Voraigne’s version provided a convenient synthesis of medieval romance and didactic hagiography. For the numerous soldiers fighting in the Holy Land or defending the far-reaches of Christendom, the tale of simple faith allowing victory over a vicious enemy was irresistible. Iconographically, the dragon is Satan, and George the Church or Christ Himself, thus providing a simple message of how God could protect all Christians.