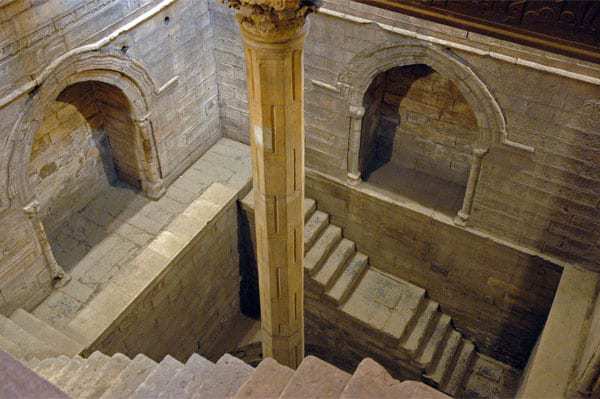 The genius of Ancient Egypt never ceases to amaze. A rare structure called a nilometer was discovered in the ruins of the ancient city of Thmuis in Egypt’s Delta region. The device was likely constructed during the third century BCE.

The nilometer was used for approximately 1,000 years to calculate the water level of the Nile during flooding season. Only a few of the devices are known to still exist in the entire world. The simplest nilometer is a vertical column submerged in the waters of the river, and are marked with intervals indicating the depth of the water. Other nilometers were marked with a flight of stairs and water markers on the walls leading down to the river.

University of Hawaii archaeologist Jay Silverstein was on the team that found the device. He said, “Without the river, there was no life in Egypt. We suspect it was originally located within a temple complex. They would’ve thought of the Nile River as a god, and the nilometer was this point of interface between the spiritual and the pragmatic.”

In the past, the Nile flooded the surrounding plains each year in late July or August. When the waters receded, they left behind a blanket of fertile silt that was essential for growing crops such as barley and wheat. In 1970 the Aswam dam was built to control the flooding.

The amount of flooding changed vastly from year to year. If the flooding was not enough and there was not adequate rich soil left behind, the area could see a large famine. Once every five years the flooding would be too much or not enough, leaving the area in a state of devastation.

The ancient people of Thmuis constructed their nilometer out of limestone blocks. It measured roughly eight feet (2.4 meters) in diameter and a staircase led down to its interior. It likely measured the water table as a gauge for the strength of the river. The device had spiritual connotations, as the people viewed the river as a God called Hapi and in ancient times the nilometer was likely surrounded by a temple.

Robert Littman, also an archaeologist at the University of Hawaii, explains how the nilometer also helped levy taxes. “During the time of the pharaohs, the nilometer was used to compute the levy of taxes, and this was also likely the case during the Hellenistic period. If the water level indicated there would be a strong harvest, taxes would be higher.” The grain collected as taxes could be stored for years when the Nile did not provide enough fertile soil for crops.

The nilometer was so important, it likely played a role both in ancient priesthood and in politics, since it was both a spiritual and practical device. It is likely that only priests and leaders were actually allowed access to the device. The device was so effective that some nilometers in Egypt were used all the way until the construction of the Aswan Dam, which rendered the use of the nilometer obsolete.

Names of ancient Egyptians with corresponding numbers can still be made out in the limestone. These people likely contributed funds to the construction of the device.

The city of Mendes which used to lie at the excavation site may have already been declining by the fourth century BCE. The rise of another city, Thmuis, located half a kilometer south of ancient Mendes, likely arose to accommodate the changing course of the Nile. (In ancient Egypt the Nile had seven branches. Today it has only three.) The discovery of the ancient nilometer confirms the location of the channel of the Nile along the western side of Thmuis.

The Nile is still shifting even today. The largest city in the region is now El Mansoura. Thmuis still exists, but it is now just a small village. The Nile still provides water to locals. Workmen digging the foundation of a water pump initially discovered the nilometer.

Ancient customs associated with the river still persist as well. Now and again young women can be seen rolling down a hill towards the nilometer. The life-giving powers of the Nile remain strong in folklore. The custom is practiced by women hoping to get pregnant.

In recent years, the construction of a new huge dam by Ethiopia, the Grand Ethiopian Renaissance Dam, will further impact the water supply to Egypt and Sudan. Politicians in the region were so concerned by the dam construction that former Egyptian President Morsi threatened to blow it up before it was finished. Water is still sacred in the region, and only time will tell how water distribution plays out and continues to write history.

Despite the Nile’s shifting patterns, people in the region of the nilometer likely lived life uninterrupted for two millennia, making the nilometer quite an effective device for helping ancient people plan for difficult years.