Solving the Mystery of the Bible's Most Controversial Character, Mary Magdalene 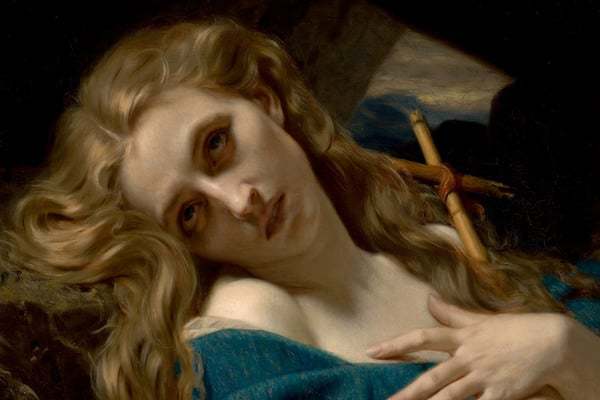 Solving the Mystery of the Bible’s Most Controversial Character, Mary Magdalene

Almost 2,000 years after the Gospels were written, Mary Magdalene remains one of the most mysterious figures of the Bible. In past centuries, Magdalene has been interpreted in many ways. She’s been seen as a repentant prostitute, an early follower of Jesus, and some have even suggested that she might have been Jesus’ wife. Part of the reason it’s so hard to know anything for certain about Magdalene is that not much is written about her in the Bible. And she doesn’t appear in many other historical sources. That’s made it easy to invent new roles for her over the life of the Church. But, just who was Mary Magdalene: prostitute, saint, or Jesus’ wife?

We know that Mary Magdalene was a first-century woman who probably lived in the region around the Galilee Sea. But that’s about all we know for sure. The Gospels usually reference her as Mary “the Magdalene,” which implies that she might have been from the town of Magdala. However, the word “Magdalene” comes from an Aramaic word meaning “fortress,” which has led some historians to suggest that it’s really more of a nickname. Instead of being from Magdala, she might have been called the Magdalene in reference to her position as a tower of strength for the early church.

To further confuse matters, she is far from the only Mary in the Bible. The name Mary, or Miriam in Hebrew, was extremely common, and there are at least four other Marys mentioned in the Gospels. Mary Magdalene is usually distinguished from these other women with her full name, but not always. As a result, there are different traditions in Christianity about which passages actually refer to her. This means that there are also different traditions about who Mary was. In the Western Church, she’s best known as a repentant prostitute. But this interpretation is probably inaccurate.

Mary Magdalene first enters the story when Jesus, in the Gospel of Luke, encounters “some women who had been cured of evil spirits and diseases: Mary (called Magdalene) from whom seven demons had come out.” This fact that Mary was apparently cured of demons implies that she might have been seen a sinner, which leads some evidence for the idea that she was a prostitute. But just after that passage, the Gospel mentions that the women are helping to support Jesus by their own means. That implies Mary was probably an upper-class woman, rather than a prostitute.

The tradition of Mary as a prostitute seems to come from a confusion based on the text of the Gospels. You see, there’s actually no reference in the Bible about Mary being a prostitute. Instead, there is an unnamed woman in the Gospels who is identified as a woman with a “bad name” (i.e. a prostitute) who anoints Jesus’ feet with oil. By the sixth century, Mary had somehow come to be identified as this unnamed woman and is mentioned as a prostitute in a speech by Pope Gregory I. This “composite Mary” formed the main idea of Mary in the Church. But the real Mary was probably quite different. And she may have played a much more important role in the life of Jesus than you ever realized.

While Mary Magdalene might seem like a minor figure in the Gospels, there’s a lot of evidence to suggest that she was actually very important in the life of Jesus. From the passage from Luke, it’s obvious that Mary helped support Jesus’ ministry financially. But she was also one of his first followers. And in many ways, she was one of his most devoted disciples. After all, Mary shows up at many of the most important moments in Jesus’ life. When Jesus is crucified, many of his disciples abandon him.

Mary is also mentioned specifically as being present at the crucifixion and refusing to leave Jesus’ side at the moment of his death. Mary then follows Jesus’ body as it is laid to rest in a tomb. And in the Gospel of Mark, it’s Mary who brings perfume to anoint his body, an important part of Jewish burial traditions at the time. In three of the Gospels, Mary is even mentioned as the first person that the resurrected Jesus appears to. He then instructs her to tell the other disciples, making her an “apostle to the apostles.”

The fact that in the Gospel tradition it is Mary that Jesus chooses to appear to instead of any other disciple implies that Mary had a central role in his life and ministry. And the fact that it is Mary who sticks by him to the end says a lot about her as a person. It suggests that Mary was a much more important figure in the early church than has been passed down in the Gospels. But part of the problem when one tries to get a handle on who Mary really was is that the Bible is really one of the only sources of evidence for her life.

And the Bible itself wasn’t written to serve as a historical document. The Gospels were written to provide religious instruction. And the authors of the Gospels were each trying to push a specific interpretation of Jesus and his life based on their audience. The Gospel of Matthew, for instance, was written for a Jewish audience and stresses Jesus’ role as a fulfillment of the promised Jewish Messiah. Meanwhile, John was written for a later, gentile audience and stresses the divinity of Jesus and his role as a savior for everyone.

But written at a time when women were widely regarded as inferior to men, none of the authors of the Gospels were eager to play up the possible role of Mary Magdalene as one of the Jesus’ disciples. But there were also other gospels written around the same time that didn’t make their way into the official canon of the Bible. And in many of these “apocryphal,” or hidden gospels, Mary plays a much more important role in the early Church. And some have even seen evidence in them that she may have had a romantic relationship with Jesus. But is this true?

The idea that Mary was actually Jesus’ wife really came to widespread public attention with the publication of Dan Brown’s book, The Da Vinci Code. In it, the main character discovers that the Catholic Church has been suppressing the secret that Jesus and Mary Magdalene actually had a family together. But The Da Vinci Code was hardly the first work to explore the idea. The theory of Jesus having secret descendants has a long history. One monk and historian even claimed in the 13th century that the heretical Cathar sect believed something similar.

Most of the evidence for this theory comes from apocryphal texts. In particular, the Gospel of Mary, which probably dates from the third century, and the Gospel of Phillip, probably from the same period, make reference to the special relationship between Mary and Jesus. In the Gospel of Mary, she is described as the disciple that Jesus loved the most. And when Mary first goes to tell the apostles that Jesus appeared to her, they ask why Jesus would appear to a woman instead of them.

But Matthew, one of the apostles replies, “If the Savior made her worthy, who are you to reject her? Surely the Savior knew her very well. For this reason, he loved her more than us.” It’s an interesting suggestion that Jesus and Mary had a more complex relationship than is suggested in the cannon Gospels. If true, and if the other apostles were the authors of the Gospels in the Bible, then it makes sense that they may want to keep the fact that Jesus loved Mary more than them quiet. Of course, this passage doesn’t actually say that Mary was Jesus’s wife. But the Gospel of Phillip just might.

In the Gospel of Phillip, Mary is mentioned as being Jesus’ “companion.” And the word used for “companion” in the original Greek is often used in other places to mean “wife.” It seems like the text is actually saying that Mary and Jesus are married, which has led many people who believe in the theory to latch on to the Gospel of Phillip to support their argument. But there are a few problems with that interpretation. To begin with, the word for “companion” does sometimes mean spouse, but not always. And in other places in Phillip, a different word is used when referring to someone’s wife.

So, it seems more likely that Mary is being described as a companion in faith to Jesus, not necessarily his spouse. And while it’s not impossible that this later book is reflecting an accurate tradition that Jesus was married, it seems unlikely that no other works would mention it. Even Phillip itself doesn’t seem to explicitly make that connection. Ultimately, there’s really no hard evidence to suggest that Mary was Jesus’ wife. Instead, she was likely an early and committed follower of Jesus. But the mysterious Mary Magdalene remains one of the most interesting and enigmatic figures in the Bible. And many of the unanswered questions about just who she was will probably remain unanswered for a long time to come.