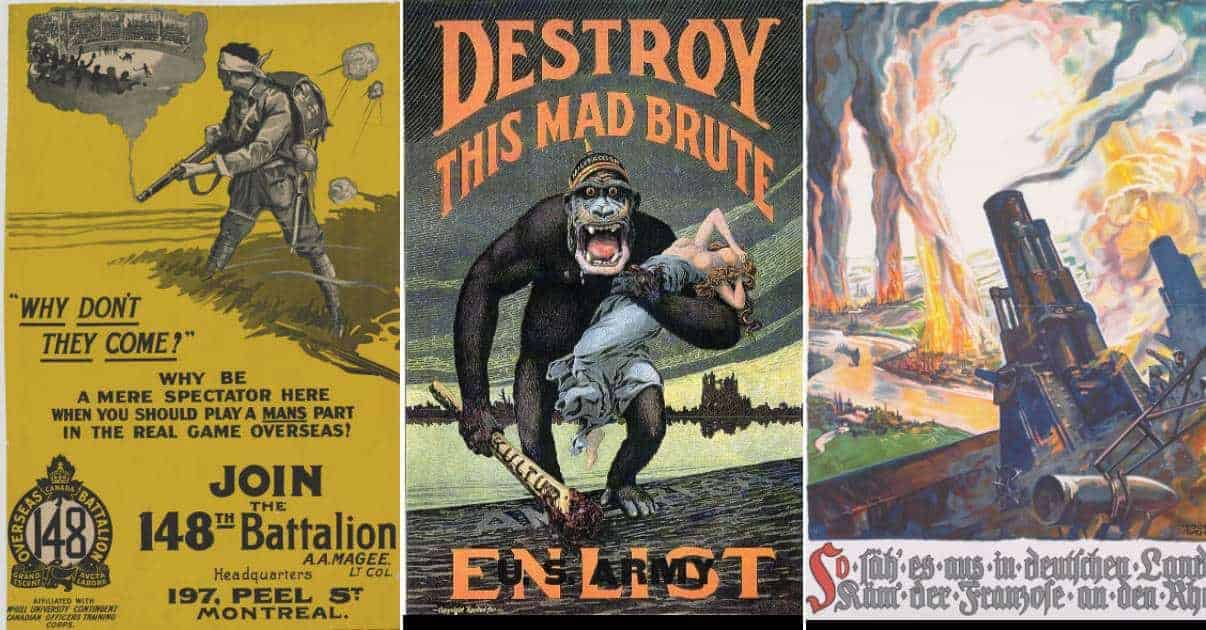 Russia was known for being slow to mobilize. In fact, Germany planned on it. For Russia, the drawback to having a massive army was the fact that it took so long to get the army organized and to the front lines. The good thing was that with a massive population there was never a need for conscription, and the army was supplied with men mainly through volunteers. Even with a large army fighting the war, there were still enough men at home to keep things working, at least for a while.

This meant that there was not as big of a need for propaganda in Russia as there was for other countries. Nicolas II did put out some pamphlets and posters that were geared toward getting people to buy war bonds which would fund the war effort. There was propaganda at the time being put out by the Communist Party that was geared toward encouraging people to fight not the Germans, but the Czar and his family. Thus came the Russian revolution of 1917.

Among the few pieces of Russian propaganda that was put out during World War I was this image of Kaiser Wilhelm II being depicted as the arch-enemy of Russia. Kaiser Wilhelm II was the person blamed for the start of the war in Russia. In this image the Kaiser is portrayed with a devil tail, horns, and cloven hooves.

With two skulls in his hands he looks like a figure of absolute evil. The skulls were used as symbols of greed, evil, and brutality. It was posters like this that kept men volunteering for the war even as losses on the front mounted. It was not until after the revolution that Russia finally accepted defeat and signed a surrender with Germany.

This is How it Would Look in German Lands

Propaganda in Germany near the start of the war focused on convincing the public that violating Belgian neutrality was necessary in order to get to France. There was a three-pronged approach to propaganda in Germany. They censored their own press so that no negative reports on the war would reach the public, they presented favorable information and publicity about the war to news reporters and agencies, and finally they worked to prevent the home front from being infiltrated with propaganda from the enemy.

The government would supply press releases to journalists who were not permitted to edit the reports. This meant that there was no diversity of information among newspapers and it caused the public to generally distrust the press. Propaganda in Germany toward the second half of the war took a very different turn as the need for money rose. It started playing on the fear of the people and the need for money and men at the front.

This poster from 1918 focuses on the need to for the Rhineland to remain German. The text says “This is how it would look in German lands if the French reached the Rhine.” The Rhineland made up a border with France and it was important to both sides because of that. The Germans wanted to keep France out of the Rhineland not only to keep the front in French territory, but because the Rhineland was a large industrial sector for the country.

The poster depicts French howitzers firing on German towns with buildings on fire. It was supposed to scare the public into continued support for the war. Nationalism in Germany had people willing to support the war in the beginning but now support for the war was as scarce as food so the propaganda started to shift toward that of fear.

Why Don’t They Come?

Canada during World War I was not given much choice as to whether or not to join the war. Once Britain entered the war, Canada was obligated to because they were still a British dominion, and therefore Canada’s foreign policy decisions were made by British Parliament. The war caused a rift in Canada as British Canadians were much more willing to support the war effort, while French Canadians were less willing to get involved in British affairs. For the first part of the war Canada’s force was voluntary, but people of color and different ethnicities were not allowed to volunteer. They were told “this is a white man’s war.”

Propaganda was therefore focused on shaming or guilting men to sign up and fight the war. There was not a lot of propaganda that focused on fear because few believed that the war would ever reach Canada. Propaganda was also geared toward donations to the Canadian Patriotic Fund which helped support the war effort and the families left behind as their men were fighting.

This propaganda poster worked on a number of levels. It played to the guilt of a man who saw it. How could he sit by and watch hockey while a soldier was in desperate need of help? It also suggested that a man who had not volunteered for the war was not really a man because he wasn’t playing a man’s part. Not only did it speak to the men eligible to fight in the war but for those that were not.

The poster gave the sense that any man who did not volunteer for the war was someone who should be shamed for not being a real man and doing his part. The poster is done in yellow because that color gives a sense of warning or immediacy, men are needed now to volunteer because the poor chap in the photo won’t last very long. Posters like this were also meant to help convince the French Canadians that the war was necessary.

The United States never had a large standing army, and that meant that when war came they had to quickly mobilize and get public support for the war. President Wilson created the Committee on Public Information whose job it was to put forth propaganda towards the war. Wilson chose George Creel to head the organization largely because Creel had a unique approach to propaganda that Wilson agreed with. Creel did not want to censor information, which was contrary to most propaganda initiatives at the time. He would allow the papers to publish what they wanted as long as they did not print enemy propaganda or lies about the war.

Since the United States had not quite reached the age of mass media, Creel focused most of his attention on posters. Some of the posters that were created through his department remain as iconic images to U.S. culture today, such as the Uncle Sam “I Want You” poster. Creel partnered with advertising agencies and put his posters everywhere. They were on subways, bus stops, billboards, barns, and anywhere else an American might walk. Creel also hired 75,000 men to travel and deliver hundreds of patriotic speeches to rally people to the war effort. Creel’s operation was considered one of the most successful to date as his efforts even reached Europe and Germany.

Some of the propaganda took a less patriotic turn and focused on defeating a barbaric enemy. This poster shows a large brutish ape carrying a woman away and leaving destruction behind him. He carries a club that says “Kultur” which was representative of German culture. It also shows the brute making his way across the ocean and stepping onto American shores as a way to instill fear into the hearts of Americans that the German menace could reach them.

This sort of propaganda was effective but it also put numerous German-Americans at risk. They faced persecution for being associated with the Germans, despite their families having lived in the United States for generations.