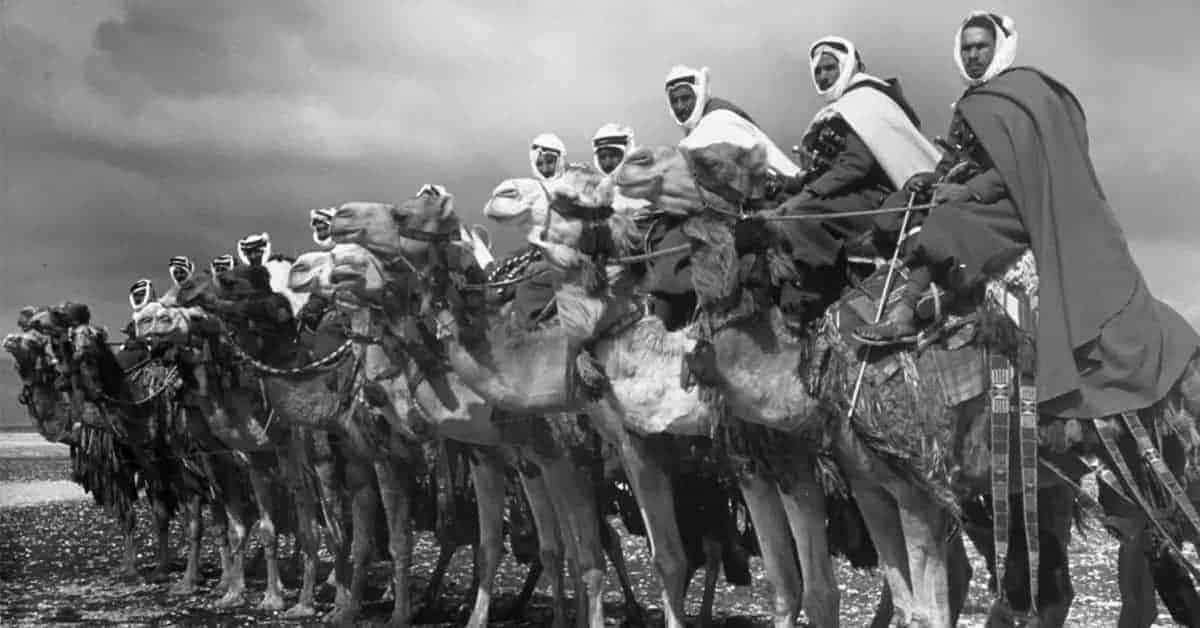 From birth Hussein bin Ali boasted an impeccable pedigree. As a child of the Banu Qatadah tribe, which ruled Mecca in the name of the Ottoman Sultan in the late 19th century, he could trace his lineage back over twelve hundred years to Muhammad himself. It would be his destiny, it seemed, to one day take up the position as Sharif of Mecca – a title conferred to the leading noble in the most holy city in the religion of Islam.

Still, Hussein clashed with the Ottoman Sultan when this destiny seemed to be threatened. In 1880 Hussein’s uncle, the current Sharif of Mecca, was assassinated and the Sultan replaced him with a man from a different tribe. Hussein thereafter became a vocal opponent of the Sultan, and as punishment for this opposition he would be placed under house arrest for sixteen years. He might well have died there, an unknown, had it not been for a revolution in the Ottoman Empire, led by the Young Turks, who unseated the Sultan and installed a constitution for the empire in 1908.

As a reward for his opposition to the disgraced Sultan, Hussein was finally appointed the Sharif of Mecca, the position that he had sought for so long. By all accounts he was content there, but his two sons Abdullah and Faisal were still not happy with the place of their people in the Ottoman Empire. Both had begun to embrace the cause of Arab nationalism, and hoped that one day they might help to create a state for the Arab people independent from the Turks in Istanbul.

The outbreak of the First World War in August 1914 and the entry of the Ottoman Empire into the war the following September would provide Hussein and his sons an opportunity to realize this dream. Because of his high standing, his links to Arab nationalism, and his previous disputes with the central government, the British saw him as a potential ally once the war began. In 1915 the British High Commissioner for Egypt, Henry McMahon, began corresponding with Hussein in an effort to convince him to rebel against the Ottoman government.

Hussein and McMahon exchanged letters during the course of 1915 and 1916 in an attempt to establish terms under which Hussein would lead a rebellion. In exchange for helping the British against the Ottomans, Husein asked that the British support him during the war and help him to create an independent Arab state once the fighting was over. McMahon agreed in part, but refused to promise that this hypothetical Arab state would include Palestine.

Because of this exclusion Hussein initially rejected the deal, but then in May 1916 the Ottoman government made a critical mistake. They seized twenty-one leading Arabs in Damascus, accused them of treason, and had them executed. Hussein’s son Faisal was in Damascus that day and witnessed the execution. Afterwards Faisal would return to his father and tell him what had happened, winning Hussein over to the cause of rebellion. The following month Hussein declared the Arabs to be independent, and unfurled the standard of his revolt against the Turks.

Hussein would begin his campaign against the Ottomans on his own home turf in Mecca, where the Ottoman government maintained a modest garrison. Though outnumbered, the Ottoman troops were outfitted with state of the art German small arms and artillery, and were able to hold off Hussein’s rebels for the better part of the month as they fought for each house and street in the holy city. Still, Hussein was able to overcome the garrison and take Mecca once the British dispatched artillery of their own from Egypt.

Thereafter the Arab rebels drove to the sea, taking the port of Jidda, where they were able to increase the size of their force by recruiting Arabs who had been taken prisoner while fighting for the Ottomans. Still, the rebels would struggle to field enough men to push their revolt further, and often would have to draw upon the nomadic Bedouin tribes who roamed the region. To help the Arabs to overcome this deficiency, the British dispatched some of their own personnel to fight alongside the Arabs, the most notable of whom was T.E. Lawrence, since immortalized as “Lawrence of Arabia.”

Hussein’s forces were able to utilize Lawrence as an envoy to secure military aid from the British during key confrontations with the Ottomans. Lawrence also became a close friend and trusted advisor to Faisal, and was able to persuade Faisal to adopt a new approach to defeating the Turks. Whereas Faisal had wanted to confront the Ottomans directly, Lawrence recognized that while the Ottoman forces in Arabia were well equipped they relied upon a single rail line running south from Istanbul for their supplies. Disrupting this rail line through sabotage and hit and run attacks from camel back helped to weaken the Ottoman position.

As the Ottoman forces slowly began to starve, the Arab rebels went on the offensive. In May 1917 Lawrence led a small force across the desert to assault Aqaba, the last Ottoman port on the Red Sea and a threat to the Suez Canal. Once they emerged from the desert this small force was able to quickly recruit local Arab Bedouins to their cause, more or less creating an army on the spot which would be successful in taking the city.

The victory at Aqaba proved that the Arabs could win. Earlier they had been little more than a distraction to the Ottomans, a way of preventing them from threatening British control of the Suez Canal. After Aqaba they would garner a good deal more support from both the Arabs of the region and the British themselves. Now working in a close partnership, the British and the Arabs moved on Jerusalem, taking it just before Christmas in 1917. From Jerusalem they pushed northward, seizing Damascus and Aleppo from the Ottomans and driving the Turkish forces back into Turkey.

Recognizing their defeat, the Ottomans signed an armistice in October 1918, ending their participation in the First World War. The Arab rebels were overjoyed, thinking that they had won their independence. Faisal set up a provisional government in Damascus to act as the core of a new independent state. They would soon discover that things were a bit more complicated. While the British had promised Hussein that he could found his own country after the war, they had also promised some of the same territory to the French in the Sykes-Picot agreement and had publicly stated their intention to create a homeland for Jews in Palestine.

The matter of new borders was to be decided at the Paris Peace Conference. While the Paris Peace Conference is most famous for producing the Treaty of Versailles, it would also determine the fate of much of the Middle East. Hussein sent Faisal, along with a delegation that included Lawrence, to Paris to argue their case for an Arab state. The result would be an agreement that met some but not all the demands of each interested party.

The French were to receive control of Syria and the British would administer Iraq, but they were to rule these territories as so-called “Mandates” under the pretense that they were to guide the people under their control towards eventual self-government. Hussein would get his independent state centered around Mecca and Medina and take on the title “King of the Arabs,” but was denied the territory in the north. In the wake of this decision the French immediately marched on Damascus, crushing the Arab forces under Faisal’s provisional government and driving Faisal out of the city.

Despite all appearances, this was not the end for Faisal. In 1920 an Arab insurrection broke out in Iraq. In order to quell this uprising the British invited Faisal to take on the position of King of Iraq. Still, resentment against what had happened in Damascus continued to fester. Seeking revenge against the French, Faisal’s brother Abdullah put together a small force of tribal Arabs and threatened to carry out raids against the French in Syria. In an effort to deescalate tension Winston Churchill intervened, meeting with Abdullah in Jerusalem and installing him as King of Jordan.

Still, the breakup of the Ottoman Empire left lasting scars on the region. Resentment of the French and British, and of the West as a whole, never dissipated and most of the monarchies established after the war would be replaced by more extreme regimes. Hussein would not remain “King of the Arabs” for long, as he was unseated by the dynasty of Ibn Saud who would go on to found Saudi Arabia. Faisal would manage to gain independence for Iraq in 1932, but his successor fell to a coup in 1941 and Iraq would eventually come under the control of the Ba’ath Party. Only Abdullah’s monarchy would remain, with his descendants ruling Joran to the present day.