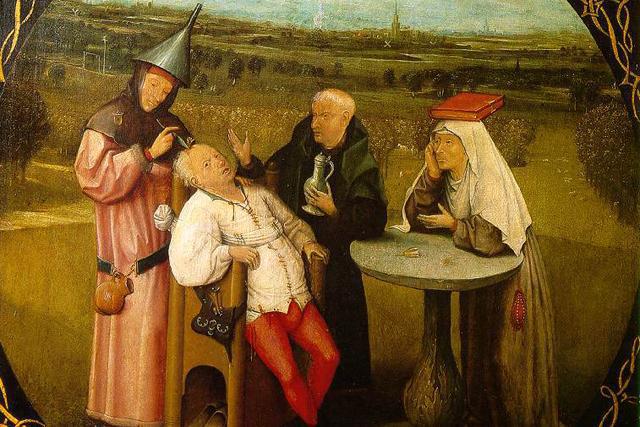 The early history of surgery isn’t a pleasant one; it was a last-ditch measure when no alternatives were available, and, in truth, was as likely to end a life as to save one. Nonetheless, early surgeons performed a range of different surgeries long before modern medicine. Sometimes, their patients even survived.

Surgical techniques were at their best in classical Greece, Rome and India, as well as during the Middle Ages in the Middle East and their worst in Europe throughout the Middle Ages and early modern period. 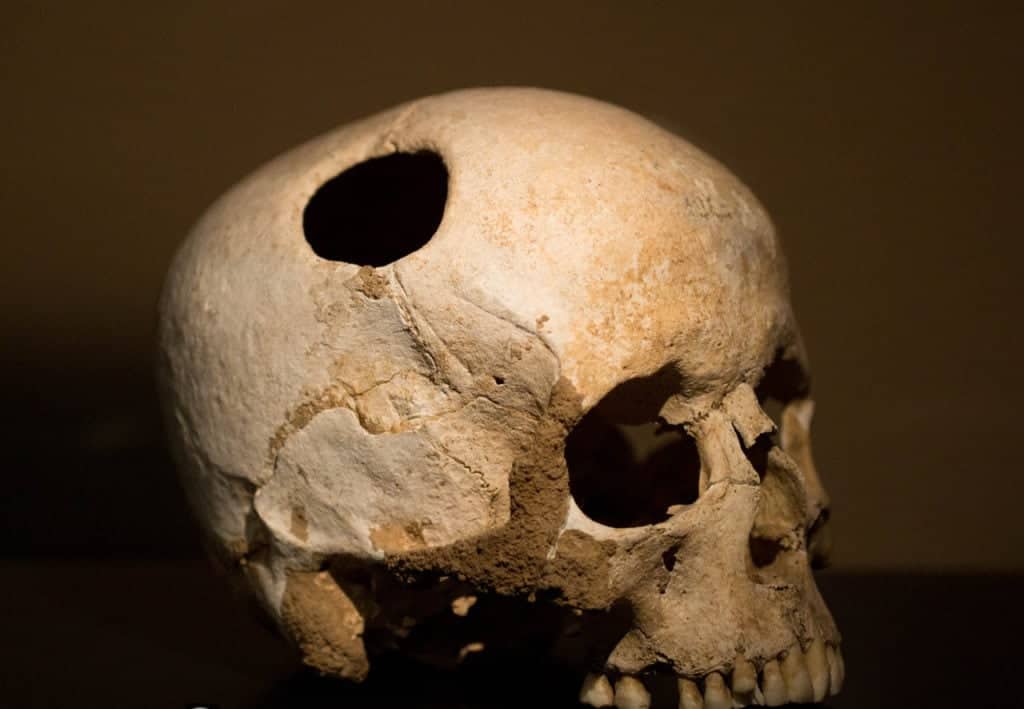 Trepanation is the process of creating an opening in the skull, either by drilling or sawing. The procedure typically refers to the removal of a circular piece of bone from the skull. Trepanation, also called trephining or trepanning, has its origins during the Neolithic period. More than 1500 skulls found dating to the Neolithic period show evidence of trepanation, with, in some cases, multiple holes in the skull.

Evidence suggests that the majority of cases of trepanation involved adult males; however, women and children’s skulls have also been found with evidence of holes drilled in the skull. Some cases of trepanation may have occurred after death, rather than before. In those cases, the piece of the skull may have served a magical or spiritual function, perhaps as a protective charm.

In Peru, some skulls suggest that surgeons may have practiced on the dead to improve the likelihood of successful surgeries on the living. Evidence from skulls found in Peru shows that some individuals survived the operation, as the skulls have signs of bone re-growth. The survivors would have retained a significant injury for some time following the operation.

From a modern medical perspective, trepanation has potential benefits. In the case of a head injury, the brain can swell. It is certainly possible that some instances of trepanation were a direct response to an injury and an attempt to save an individual. Creating an opening in the skull can relieve pressure and release accumulated fluid, saving the patient’s life. Some historians have suggested that trepanation was a form of psychosurgery, designed to manage behavioral or neurological conditions, like epilepsy.

While medical explanations may account for some cases of trepanation, it seems likely that others were spiritual in nature. Perhaps early people believed that surviving trepanation would provide special powers or abilities, or had seen individuals become unconscious and regain consciousness, and viewed this as a sort of magic. 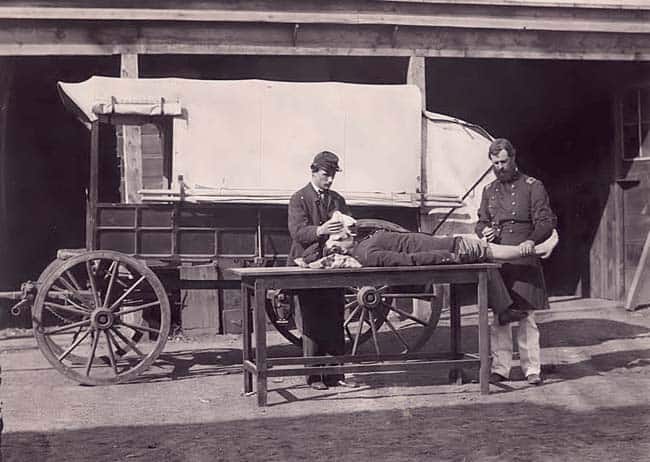 While trepanation may have had a spiritual significance, amputations were practical and essential in nature. Amputation, or the removal of a limb, was necessary in the case of severe injury or infection to a limb. The first amputations were likely performed in the Neolithic period; however, there’s no evidence of the patient surviving, and there’s a story of amputation told in the Indian Rig-Vega, dating to between 3,500 and 1,800 BCE.

By the time of Classical Greece, in the 5th century, surgeons provided clear explanations and instructions on amputation in cases of gangrene, explaining that the diseased tissue must be fully removed. Up until 100 CE, the operation was solely used to manage gangrene; however, after that time, it was also used to treat injury or other conditions. Hot oil and cauterization were used to prevent excess bleeding and infection; however, the risks were quite significant.

The introduction of gunpowder and firearms increased the need for amputation after the 14th century; however, the basic procedures were largely unchanged until improvements in tourniquets in the late 17th and early 18th centuries. Amputation procedures improved throughout the 19th century; however, mortality rates remained quite high, with deaths totaling around 85 percent during the Napoleonic Wars.

Amputation techniques and survival improved significantly following the introduction of both anesthesia and antiseptic practices in the 19th century. Increased survival also led to the development of improved prostheses. The majority of amputees prior to the Civil War likely had no access to prosthetics. 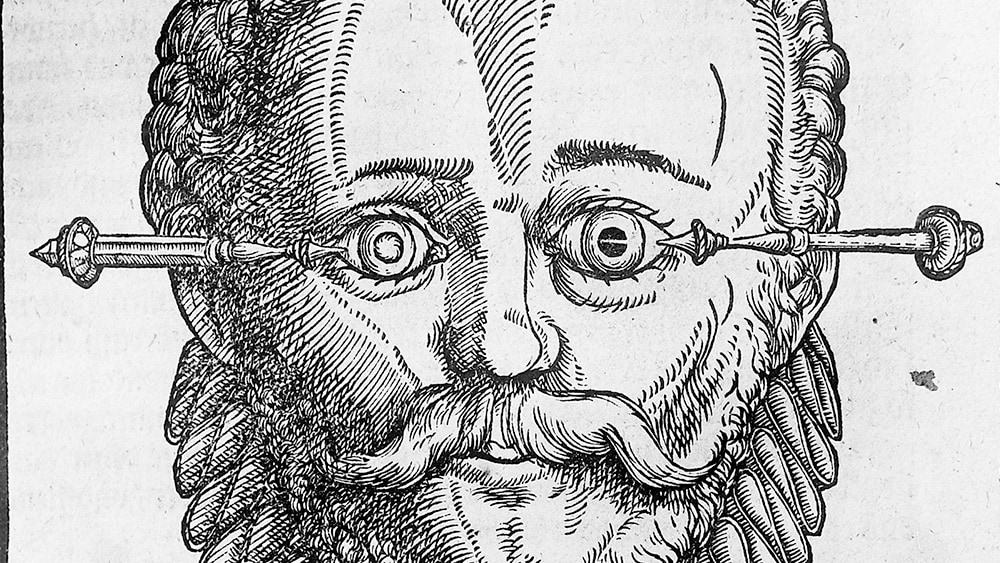 Ophthalmological surgeries or surgeries on the eye were performed surprisingly early in history, and some were successful at restoring vision to the eye. Other attempts were much less successful and resulted in a high mortality rate.

By the 5th century BCE, physicians in ancient Greece were surgically treating severe cataracts. The procedure, called couching, could only be performed once the cataract had fully hardened, and the zonules connecting it had weakened from its weight. A sharp tool was used to push the clouded lens out of place and down toward the bottom of the eye. This restored some amount of unfocused vision, but only around 30 percent of patients experience improved vision with light and movement. The remaining 70 percent remain or become totally blind.

A suction technique was later developed, perhaps around the 2nd century CE, and was in widespread use in the Middle East in the Middle Ages. This technique required a large incision, then suction of the lens from the eye using a tube and an individual with strong lungs.

By the middle of the 18th century, doctors were experimenting with new cataract removal techniques, including the improved extracapsular cataract extraction technique. Couching operations were still in use. Both George Frederic Handel and Johann Sebastian Bach suffered through these early attempts at cataract surgery. Bach died only a few months later.

Continued efforts were made at cataract surgery throughout the early 19th century; however, fatality rates were high, and the eye had to be left entirely stable for a period of weeks during the healing process. Modern medicine brought about successful cataract surgeries that effectively restored vision. 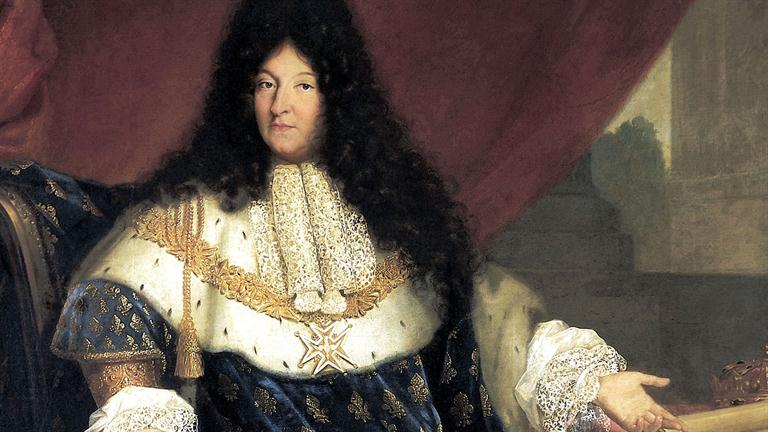 In the 17th century, physicians did not perform operations; these were the work of barber-surgeons. A barber-surgeon, Charles Francois Felix was called in to perform the surgery. Felix requested a period of six months to prepare for the delicate operation. He designed two new surgical tools, which still exist today, a retractor and a curved scapula and was provided with some 75 healthy test subjects on which to practice, primarily convicts. He operated on three to four of these men each week, and some survived the operation.

On November 18, 1686, the king stoically endured the operation. It is said that he made no sound at all during the procedure, performed, of course, without anesthesia. Within a month, he was able to sit up in bed, and over time, he recovered fully.

Monsieur Felix taught others to perform the operation, but more importantly, he changed the status of surgeons. Before his operation on the king, barber-surgeons were thought of with little respect. He became the surgeon to the king, and many in the court feigned fistulas of their own in an attempt to follow the king’s example. 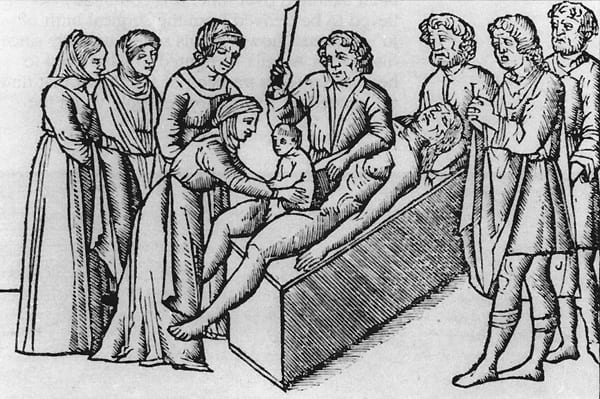 Today, the caesarian section or c-section is a common operation, accounting for about one-in-three births in the United States. While stories suggest that Julius Caesar was born by caesarean, this seems less-than-likely, as his mother lived well into his adulthood. Roman law ordered that the attempt be made to save the child of a dead or dying mother by cutting her open, likely lending Caesar’s name to the operation.

It is almost certain that the earliest c-sections took place on dying or dead mothers, either in an attempt to save the baby or to remove the baby for a separate burial and death rituals. There was no expectation that mothers would or could survive surgical births. Alternatives were few; high forceps were developed in the early 17th century, but often caused lasting damage—in some cases, worse than the risks associated with a c-section. Prior to the invention of forceps, the fetal skull was destroyed and fetus removed piece-by-piece.

In 1500, a Swiss pig gelder named Jacob Nufer performed a c-section on his wife, after several days of labor and the efforts of multiple midwives failed. Both she and the child were said to have survived; however, there is no way of ascertaining the truth of this tale. History provides other occasional mentions of successful caesarean sections before the era of modern medicine; however, with limited understanding of anatomy, lack of access to anesthesia, and no knowledge of antiseptic practices, it seems unlikely the mother would have survived the surgery.

By the middle of the 19th century, the introduction of anesthesia made childbirth a less painful experience, and made c-sections more available. The widespread introduction of antiseptic practices improved survival rates from c-sections and helped to reduce the overall rate of maternal mortality. 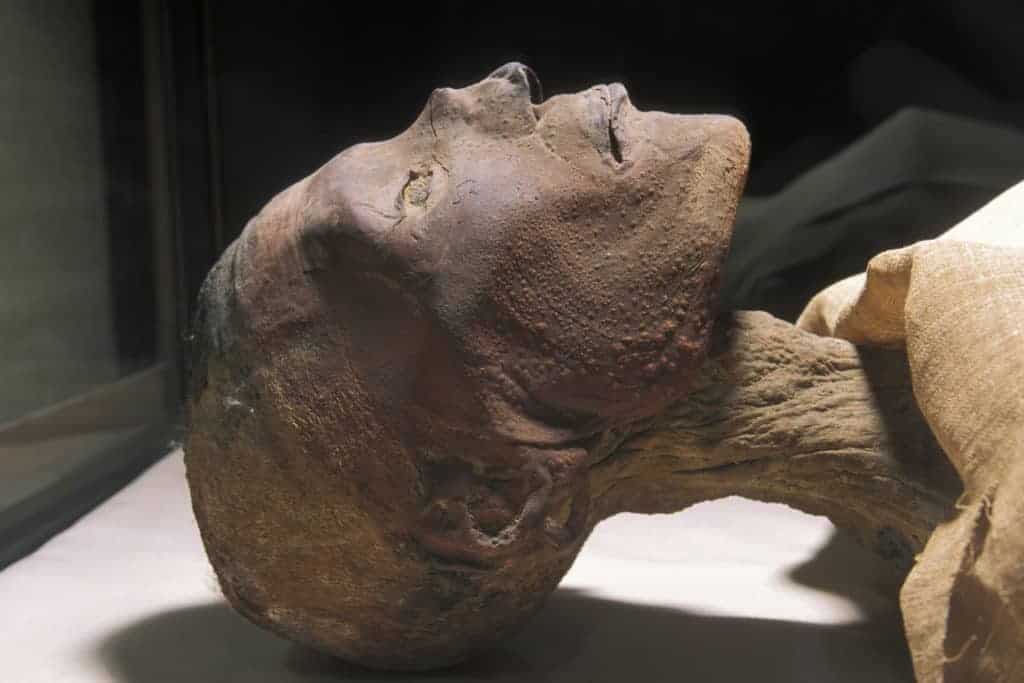 Hernias are a common medical issue, even today. Hernias occur when a piece of the intestine pokes through a weak area in the abdominal wall, and can be in the groin, abdomen or belly button. Hernias can cause significant pain and discomfort, but may be asymptomatic.

The earliest records of hernias and hernia treatments date to the ancient world, and attempts at hernia treatment appear on the mummies of two ancient Egyptian pharaohs. Ancient attempts at treatments included enemas, special diets, and castration. In addition, trusses or firm compression devices, were used. These are still used for some hernias today.

The 17th century Italian anatomist, Gabriele Fallopio proposed a surgical correction for inguinal hernias, or hernias occurring in the groin. The procedure involved a wide excision of the sac with surrounding skin and all of the hernia contents. The intestine was sewn up using a special suturing technique. The surgery was largely avoided. Like other surgeries of the time, it was quite dangerous; however, in this case, castration often resulted as well. In addition, many patients experienced a lasting stoma, or opening from the intestine that leaked waste following the surgery.

More intensive efforts at surgical correction of severe hernias began in the middle of the 18th century as anatomical knowledge and understanding increased; however, as with other surgeries, most of the time, they were best avoided before the introduction of anesthesia and antiseptics. Even these changes did not immediately improve the state of hernia surgery.

In fact, effective surgical procedures to treat hernias only began in 1935, with significant advances during the 20th century. Effectively treating hernias requires the use of a synthetic stabilizer to prevent recurrence. 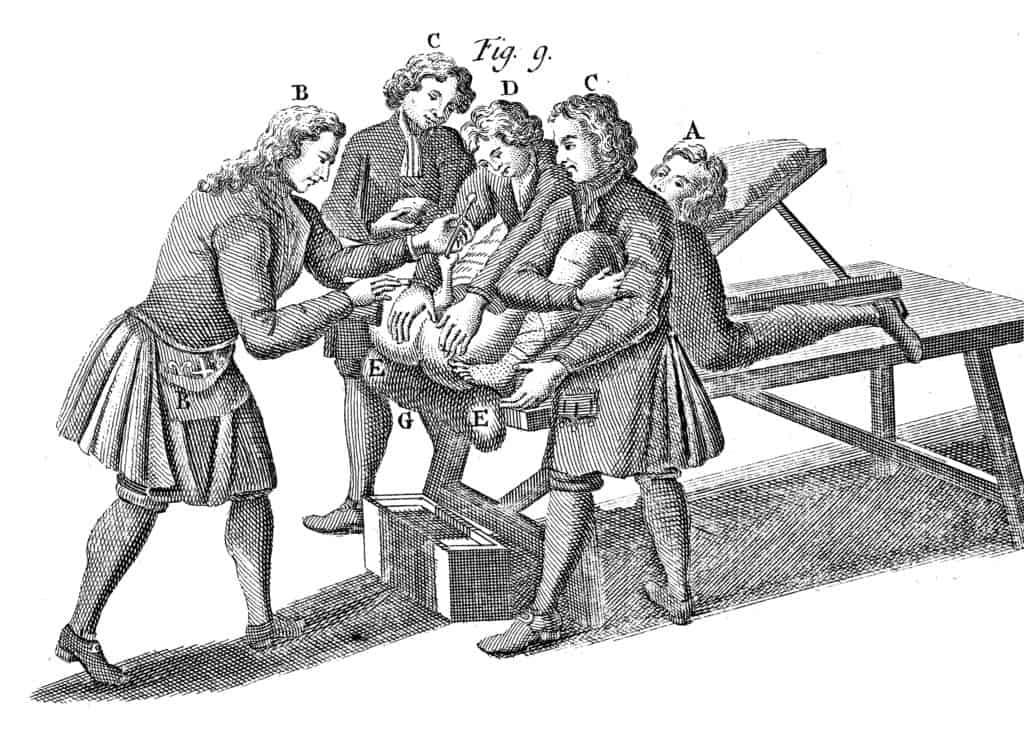 Bladder stones occur when minerals in urine become crystallized, often as a result of not being able to effectively empty the bladder. The history of the removal of bladder stones or perineal lithotomy dates to well before the time of Classical Greece. If stones are blocking the passage of urine, death can result, so the removal was, unlike many other surgical procedures, often worth the risk.

Hippocrates, author of the Hippocratic Oath, told physicians to leave the removal of stones to the practitioners or surgeons. By 200 BCE, the surgeon Ammonius Lithotomus had developed a specialized tool that allowed him to break up large stones to keep the incision smaller while removing the stones. In the 1st century CE, Aulus Cornelius Celsus described the process of perineal lithotomy. The classical method was in use throughout the Middle Ages in the Middle East; however, a church council in 1215 banned surgery for physicians in the west.

In the 16th century, Pierre Franco developed the suprapubic lithotomy method, entering the bladder through an abdominal incision. Efforts at improving the procedure continued with the lateral vesical stone lithotomy in 1727 developed by William Cheselden, cutting from the bladder through the prostate to release stones into the rectal cavity. He was said to be able to perform the entire procedure in under a minute.

The mortality rate of these procedures was, for the state of surgery at the time, surprisingly low at around 25 percent. The change to more thorough and careful procedures in the late 19th century reduced that rate to 2.4 percent with the introduction of anesthesia. Over the course of the 20th century, new, less invasive surgical options were developed to limit the damage caused by urinary stones.