Secrets of the Past: 6 World War II Mysteries That Will Leave You Baffled 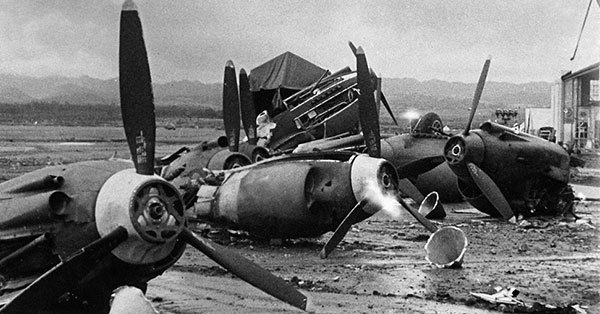 Secrets of the Past: 6 World War II Mysteries That Will Leave You Baffled

The date was December 8, 1942; a year and a day after the attack on Pearl Harbor that killed 2,403 Americans and acted as the catalyst for the United States’ entry into World War II. The American Navy was on duty at Pearl Harbor when suddenly, its radar picked up an odd reading. It seemed as if a lone plane was making its way from Japan and heading right into American airspace. The radar operators were puzzled. It was late evening, and the sky was overcast; previous attacks never occurred under those conditions.

The Americans decided to take no chances after what happened just over a year previously and sent two pilots to intercept the craft. When they reached the plane, the pilots were shocked to find out that it was a P-40 with markings that hadn’t been used since the Pearl Harbor attack. Once they got near the plane, they found that it had been shot to pieces and its landing gear was destroyed. They also saw the plane’s pilot slumped over the cockpit; his suit stained by fresh blood.

Incredibly, the pilot moved slightly, saw the two planes, smiled and waved meekly. The plane plummeted into the ground and crashed in a field. When the two pilots investigated the crash site, they found the wreckage but no sign of the pilot. The search team also found a diary that showed the plane was stationed on Mindanao, approximately 1,300 miles away. The lack of landing gear made it an extremely difficult mystery to solve. How could a pilot survive the attack on Pearl Harbor for a year? Moreover, how did he manage to land and take off with no landing gear?

As it happens, most historians believe they have solved this mystery, and the answer is very simple: It never happened. The source of the tale is a work of fiction by Robert Lee Scott Jr. who fought in World War II as a pilot. The first chapter of ‘Damned to Glory’ is entitled Ghost Pilot and it is effectively a longer version of the strange tale of the P-40 plane. The main difference between the book and the oft-told story above is that the two pilots flew from Kienow Airdrome in China to intercept the plane. Decades later, Scott admitted that he was stunned to learn that his tale was still told as some kind of unexplained mystery and said he wouldn’t have written it if he knew it would be taken as fact.

The Diary of a Young Girl is one of the most famous works of literature to come from World War II. It is a 2-year diary from the perspective of a teenage girl who was hiding from the Nazis with her family. The author’s name is Anne Frank, and she is one of the most discussed victims of the Holocaust. The Franks secreted themselves in hidden rooms behind a bookcase in the building where Anne’s father, Otto, worked in Amsterdam. They remained there from July 1942 until August 1944 when they were captured by the Gestapo. Anne and her sister Margot were transferred to a concentration camp in Bergen-Belsen, Germany. Anne died there in February or March 1945.

Historians have argued about the identity of the person who betrayed the Frank family and are no closer to reaching a consensus. On August 4, 1944, police raided the warehouse where the Franks were staying and arrested a total of eight Jews. How the police learned of the Jews concealed behind the bookcase has always been a mystery. There are a number of people suspected of betraying the occupants of the concealed room, but none of them have been definitively identified as the culprit.

According to Anton Ahlers, his anti-Semitic father Tonny was responsible. Tonny was a member of the Dutch Nazi Party and had found a letter that incriminated Otto Frank. Otto had expressed his doubts over a German victory to an acquaintance that wrote a letter outlining Otto’s thoughts and was intent on sending it to the Gestapo. Tonny found the letter and used to blackmail Otto. Perhaps Otto refused to pay more money and was betrayed?

Otto was the only member of the Frank family to survive the camps, and he believed the betrayer was a warehouse employee named Willem van Maaren. Van Maaren has always protested his innocence. Another suspect was Lena Hartog-van Bladeren who also worked at the warehouse.

Yet another theory suggests that no one betrayed Anne Frank and the others. The ‘Sicherheitsdienst’ police that found the fugitives normally investigated cases involving money; they certainly didn’t specialize in weeding out hidden Jews. As it transpired, the police were investigating reports of illegal employment and fake food ration cards. Their discovery of Anne and the others was completely unexpected. However, despite dozens of suspects and various theories, the mystery of who betrayed the Anne Frank and the other seven people (if anyone did) will probably remain unsolved forever.

5 – The Disappearance of Raoul Wallenberg, Liberator of Jews in Budapest

Raoul Wallenberg was a Swedish businessman, architect, and diplomat who also happened to be one of the great unsung heroes of World War II. This remarkable man risked his life to save tens of thousands of Jews in Hungary. He used his position as a special envoy to provide protective passports to Jews and shelter others in buildings that were designated as Swedish territory.

Sadly, he was detained by a Russian counter-intelligence group called SMERSH during the Siege of Budapest in January 1945; he was later accused of espionage by the Russians and sent to the notorious Lubyanka in Moscow. Reports suggest that he died in prison on July 17, 1947, but no conclusive proof has ever surfaced nor are there any details surrounding the circumstances of his death. What is also a mystery is the reason why he was arrested in the first place.

Recently, the Russians released information that suggested Wallenberg did not die on July 17 in Lubyanka Prison. In an eight-page document, the Federal Security Service (FSB) wrote that Wallenberg was probably “prisoner number 7” who was interrogated in prison six days after his reported death date. If this is true, then it means Wallenberg was subjected to a far greater level of abuse than previously thought. If he was actually ‘prisoner number 7′, he could have been executed immediately after the interrogation or sent to a prison such as Vladimir which is located around 250km from Moscow. Diaries belonging to former KGB chief, Ivan Serov, suggest that Wallenberg was executed under the direct orders of Stalin.

As for the reason why he was arrested, it may be due to his association with Iver Olsen of the U.S. Office of Strategic Services which was the forerunner to the CIA. One Soviet spy apparently believed that Wallenberg’s humanitarian motives were a cover for the fact he was a double agent for the Americans and Germans.

Wallenberg was more or less abandoned, and Sweden did not even ask for information relating to him for several years; his home nation simply believed the Soviets when they said he was not in the USSR. He was formally declared dead by the Swedish Tax Agency in October 2016. Whether or not he died on July 17, 1947, it is certain that this humanitarian suffered terribly at the hands of the Soviets before they finally executed him.

6 – The Vanishing Treasure Chest – Where is the Amber Room?

The incredible Amber Room was considered to be the ‘Eighth Wonder of the World’ and was a gift to Peter the Great to celebrate peace between Russia and Prussia in 1716. It was created in Prussia and construction began in 1701 but when Peter saw the room and expressed his admiration, King Frederick William I offered it as a gift and had it shipped to St. Petersburg in 18 boxes. Czarina Elizabeth moved the room again, this time to the Catherine Palace in Pushkin in 1755.

The already impressive room was expanded and renovated, and when completed, it covered 55 square meters and contained approximately 13,000 pounds of amber and other valuables. The amber panels were adorned with gold leaf, and historians believe the room was worth around $400 million in today’s money.

When Hitler initiated Operation Barbarossa, the invasion of the Soviet Union, on June 22, 1941, approximately three million soldiers entered the USSR. When the marauding German army entered Pushkin, the curators of the Catherine Palace desperately tried to disassemble and hide the precious Amber Room, but the Germans found it, tore it down within 36 hours and shipped it to Konigsberg (modern day Kaliningrad) in 27 crates. It was reinstalled in the city’s castle museum. In late 1943, the curator of the museum, Alfred Rohde, was told to dismantle the Amber Room yet again and store it elsewhere. The city was bombed by the Allies in August 1944. At that point, the trail of the Amber Room went cold.

Historians tried to come up with theories as to the whereabouts of the Amber Room. Some believe that Rohde did not follow orders, so it was destroyed in the bombing of the city. Another theory is that the amber was loaded onto a ship and is located at the bottom of the Baltic Sea. Such theories have not dissuaded treasure seekers who continue to search for the Amber Room in the same way that explorers kept looking for El Dorado. One problem with the search is that Leonid Brezhnev ordered the destruction of Konigsberg Castle in 1968; this act made it impossible to investigate the last known location of the Amber Room.

An intrepid group of senior citizens believes the room is hidden beneath the city of Wuppertal in Germany and began drilling to find it in 2016. There is also a suggestion that the treasure is hidden beneath the Mamerki Museum in Poland. However, no one has found any proof of the existence of the room in any of these locations.

As an aside, there is apparently a ‘curse’ on the Amber Room as a number of people connected with it met untimely deaths. Rohde and his wife died from typhus while a Russian intelligence officer died in a car crash immediately after talking about the Amber Room to a journalist. A German Amber Room hunter was murdered in a Bavarian forest in 1987. Construction of a ‘new’ Amber Room began in 1979 and is now on display in the Tsarskoye Selo State Museum Reserve which is located just outside St. Petersburg.