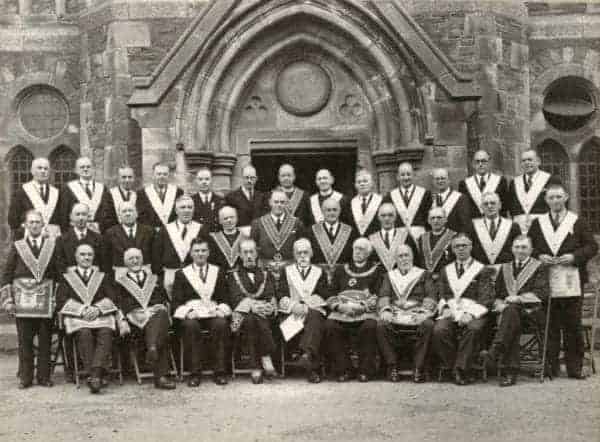 A Special Division of the SS Dealt With Freemasons

Reinhard Heydrich was the chief of Security Police and the SD (Sicherheitsdienst) in the 1930s and he took a particular interest in the Freemasons. He believed that the Masons, in addition to the Jews and the political clergy, as “implacable enemies of the German race.” Heydrich argued for the elimination of all visible traces of Masons but also to eliminate the “Masonic infectious residue that remains in the unconscious of many.”

It was because of his hatred and desire to eliminate the Freemasons from Germany and the rest of Europe he created a special section of the SS Security Service, Section II/III to deal with Freemasons. The personnel of the SD believed that Freemasons exercised real political power and that they shaped public opinion through the press. Members of the SD believed that Masons were using their influence and power in order to provoke war, subversion, and revolution.

The task of investigating Freemasons would eventually be taken over by Section VII B 1 of the Reich Security Main Office, an amalgamation of the Security Police and the SD that was created in 1939. As war loomed the restrictions on former Freemasons in Germany relaxed. The need for men in the military and for men to work in the public center meant that some former Freemasons would be allowed to work these jobs on a case by case basis. Some were even allowed to serve as officers even though they were still banned from joining the Nazi party.

The same could not be said for Freemasons in countries under Nazi control. They still faced persecution. Heydrich and his men dissolved Masonic organizations by force and confiscated all assets and documents. They would also take membership lists in order to create card catalogs of Masons to put under surveillance or send to concentration camps. All items seized from the Masons were sent directly to the SD and the Reich Security Main Office for investigation.

Freemasons that were sent to concentration camps were labeled as political prisoners, which meant that their uniforms were marked with a red triangle. This red triangle allowed them to recognize each other especially when coupled with the knowledge of the Forget-me-not. During German suppression of Freemasonry, the Freemasons abandoned their traditional symbols and adopted the forget-me-not flower. A man wearing a forget-me-not pin would be recognized as a Mason by fellow members but would not be noticed by the SD. This was likewise with presenting one of the flowers.

Once Freemasons in concentration camps discovered each other they tried to use the spirit of brotherhood that had uplifted them outside the camp walls to help them in their darkest time. Some Freemasons even went as far as to create their own lodges within their concentration camps. Loge Liberté Chérie (Cherished Liberty Lodge) was one such lodge.

Liberté Chérie was founded on November 15, 1943 by seven Bulgarian Freemasons and a resistance fighters. The Lodge was formed inside Hut 6 of Emslandlager VII. The men would meet for lodge work inside the hut around a table that would otherwise be used for sorting cartridges. A Catholic priest would stand outside the door in order to allow the brothers to hold their meetings and protect their secrecy.

Paul Hanson was elected master of the lodge and Brother Fernand Erauw was initiated, passed and raised by the lodge. The Hut held more than 100 prisoners who were only allowed to leave for one half-hour supervised walk per day. The rest of the time half the camp had to sort parts on the table and the other half were forced to work in the peat bogs. All of the members of the lodge, with the exception of 2, would lose their lives over the course of the war. A memorial was raised by Belgian and German Freemasons in 2004 in the Cemetery of Esterwegen.