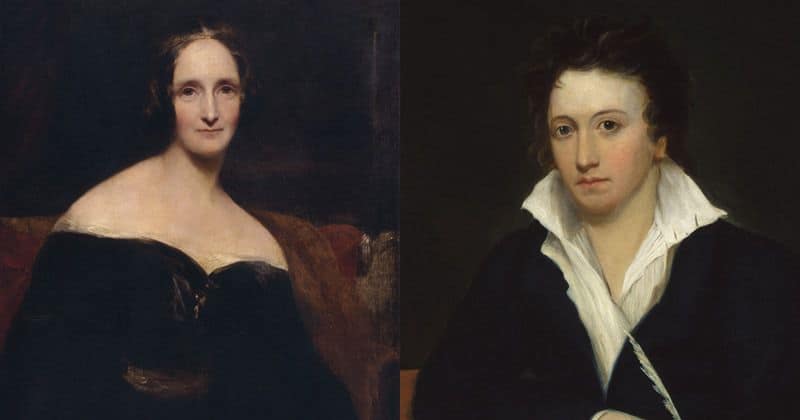 As previously mentioned, Byron and Shelley were great chums, and in 1816 decided to take a holiday together with their entourages. Shelley brought his lover, Mary Godwin, and their son, William, and Byron brought his physician, John Polidori. Also in the retinue was Claire Clairmont, Mary’s stepsister, a former lover of both Byron and Shelley (which Mary knew). They chose the Villa Diodati (above) on the shore of Lake Geneva, Switzerland, but the weather that summer was not as expected. In fact, 1816 was known as â€˜the year without a summer’, due to the heavy rain and low temperatures.

This was caused by the eruption of Mount Tamboro in Indonesia, the volcanic ash from which was so thick that it obscured the sun, meaning that candles had to be lit even at midday. Reaching Diodati in May, the Shelleys had travelled across the precarious wintry landscape of the Alps, which Mary vividly described in her travelogue, History of a Six Weeks’ Tour through a part of France, Switzerland, Germany and Holland (1817): â€˜never was a scene more awfully desolate. The trees in these regions are incredibly large, and stand in scattered clumps over the white wilderness’.

Thus a dreary atmosphere awaited the Romantic Poets and their retinue at Lake Geneva. The weather was so bad that sightseeing was all but impossible, and so the party instead passed the time with intense philosophical and literary discussions. Simultaneously, Polidori made unreciprocated advances to Mary, and Claire continued to pursue an impervious Byron. Shelley, apparently, was so affected by the atmosphere that he fled the room screaming when Byron read verses from Coleridge’s Christabel by candlelight. One fateful night, Byron suggested that each write a ghost story in the spirit of competition. Literature was never the same again.

The atmosphere was conducive to the creation of fine Gothic horror. Byron gave up on his own tale, but allowed Polidori to adapt it into the novella that was published as The Vampyre, whose protagonist, Lord Ruthven, was a thinly-veiled portrayal of Byron himself. The novel influenced Bram Stoker’s Dracula, and is seen as the very first romantic vampire tale. Meanwhile, Mary Shelley had a nightmare in which she â€˜saw the hideous phantasm of a man stretched out, and then, on the working of some powerful engine show signs of life and stir with an uneasy, half-vital motion’.

That nightmare was the inspiration for Mary’s most famous work, Frankenstein; or, the Modern Prometheus. As well as the experience of losing her virginity on her mother’s grave, Mary was also influenced by the dreadful misfortunes of miscarriage and still-birth she had borne since meeting her husband. It is no surprise that the Villa Diodati produced such a harrowing tale, given the general atmosphere and the philosophical discussions undertaken. As Mary remembered, â€˜various philosophical doctrines were discussed, and among others the nature of the principle of life, and whether there was any probability of its ever being discovered communicated’.

Despite the movement’s obsession with the self, Romanticism was closely associated with politics, in particular of the revolutionary kind. Indeed, Romanticism itself was in part formed in response to the political changes of the late 18th century. Political and intellectual movements at the time encouraged the assertion of individual and national rights and thus questioned kings’ and courtiers’ right to rule home and abroad. In particular, the American and French Revolutions were bloody demonstrations of these new views. For the English Romantic Poets, the French Revolution of 1789 and its aftermath was the most influential event in their young lives.

Thus most Romantic Poets were, at least in their youth, political radicals. Even Wordsworth, who later sold-out by becoming Poet Laureate, visited Revolutionary France in 1791, and was deeply impressed. He fell in love with a Frenchwoman and only returned due to tensions between Britain and France and his poor finances. His head was turned from the Revolution, however, by the brutal Reign of Terror. Coleridge was similarly enamored, and when the Napoleonic Wars broke out between the nations, he was decidedly anti-Britain: â€˜[I] blessed the paeans of delivered France/ and hung my head and wept at Britain’s name.

Shelley was an anarchist. Following the Peterloo Massacre in 1819, in which 15 protestors against parliamentary oppression died when charged by cavalry, Shelley wrote The Masque of Anarchy, a poem so controversial that it was not published in his lifetime: â€˜rise, like lions after slumber/in unvanquishable number/shake your chains to earth like dew/which in sleep had fallen on you/ye are manyâ€”they are few!’. As for Byron, he used his seat in the House of Lords to urge social reform, support the machine-vandalizing Luddites, and argue for the end of established religion, on the grounds that it inhibited personal freedom.

The Death of Shelley

â€˜It’s better to burn out, than to fade away’, as Neil Young once observed in Hey Hey, My My (Into the Black). Part of the legend of the Romantic Poets comes from several of them dying young, including Byron, Shelley, and their contemporary, John Keats (1795-1821). Shelley died at the age of 29, less than a month before his 30th birthday, sailing his boat in the Gulf of Spezia, Italy. His boat was named the Don Juan after Byron’s famous poem of the same name, and in it Shelley was returning from founding a politically radical journal called The Liberal.

The boat, an open vessel, had been custom-made for Shelley in the famous shipbuilding port of Genoa. Unfortunately, whilst crossing from Livorno to Lerici, the Don Juan met with a sudden and violent storm, which caused it to sink, due to a design fault according to Mary Shelley. Others have blamed the poor navigational skills of Shelley and his companions, a retired naval officer and a boat boy, who also perished. Still others have suggested that Shelley deliberately drowned himself out of depression, though he had just founded a journal of which his works would form a large part.

It took some time for Shelley’s body to wash ashore, and when it did it was hideously disfigured and bloated. Owing to quarantine regulations, he was cremated on the beach where he washed up. Many in England however were not sad to hear of his passing: â€˜Shelley, the writer of some infidel poetry, has been drowned; now he knows whether there is God or no’, smirked The Courier. But while that particular publication has been forgotten, Shelley’s legacy lives on, and a memorial to him was erected in Poets’ Corner, Westminster Abbey, the highest accolade for a British writer.

Byron goes to War (sort of)

True to his revolutionary principles, in 1823 Byron involved himself in the Greek War of Independence, fighting for Greece’s freedom from the Ottoman Empire. Before he set sail, he told Lady Blessingham that, â€˜I have a presentiment I shall die in Greece’. After a series of mishaps, Byron’s hired brig, the Hercules, reached Missolonghi in January 1824. Along the way, his deep pockets and spendthrift nature caused widespread squabbling amongst rival Greek factions over which cause he should join. After all, he had personally shelled out Â£4, 000 to refit the Greek fleet. He eventually allied himself with Alexandros Mavrokordatos.

Farcically, even the enemy got wind of Byron’s wealth, and the garrison meant to be protecting the Ottoman fortress at Navpaktos offered to surrender to him without a fight if he would pay them the wages they claimed to be owed by their employers! Even when the Ottomans executed the mutineers and restocked the fortress with loyal soldiers, Byron still could not launch an attack on Navpaktos because the men he had been assigned kept demanding more money from him, and eventually he sent them all home with the words, â€˜they may go to the Turks or the devil!’

Byron sold his remaining property in England for a handsome price, and planned to plunge all of his wealth into the Greek war effort. Byron even paid for his own unit of 30 officers and 200 men, known as â€˜Byron’s Brigade’, out of his own pocket. He nevertheless still found the time to fall deeply in love with his Greek page, Lukas Chalandritsanos, upon whom he lavished around Â£25, 000 in today’s money. His affections were, unusually, not returned. But before Byron saw any serious military action, he developed sepsis, and died in Missolonghi on April 19th 1824.

Fallen ill, Byron had his blood let with field instruments, which is presumed to have caused the lethal infection. The Greeks mourned deeply for Byron, and crowds flocked to see his body as it lay in state in London, but the Deans of both Westminster Abbey and St Paul’s Cathedral refused to bury his body, and instead he was interred in the Byron family vault in Hucknall Torkard, near Newstead. Although there is now a memorial to him in Westminster Abbey, Byron’s beloved Newfoundland dog, Boatswain, still has a more elaborate memorial than his more famous master at Newstead Abbey.