Saint Wilgefortis: The “Brave Virgin” with a Beard from God 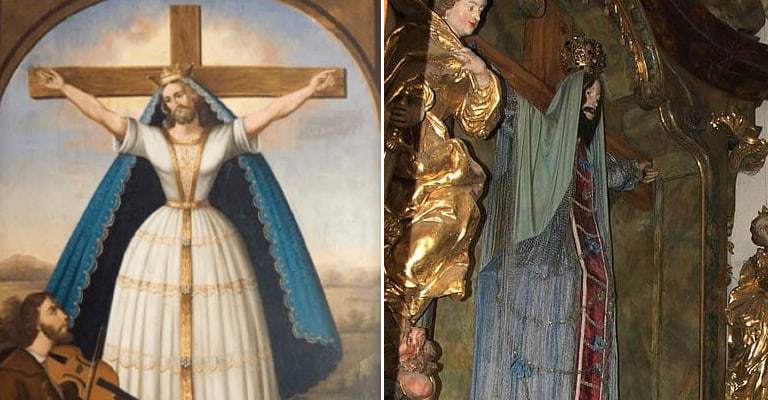 Saint Wilgefortis: The “Brave Virgin” with a Beard from God

On the walls of the Church of St. Mary’s Church in the Norfolk village of Worstead, there appears a very odd icon. Although faded and somewhat damaged by the iconoclasts of the English Reformation, it shows a young woman in a crown and flowing gown hanging from a cross. An icon of a crucified woman is unusual in itself. However, what makes it even odder is the artist has depicted the young woman with a very long beard. This bearded lady is known as St Uncumber. However, she is a just one local version of a patron saint that was popular across Europe in the Middle Ages. That saint’s name was St. Wilgefortis.

According to legend, St. Wilgefortis prayed to god to save her from an unwanted marriage. God answered her prayers by blessing her with a beard that made her so ugly no one wanted her. So her furious father crucified her. Despite the unlikely nature of Wilgefortis’s story, she soon became popular with women from the Mediterranean to England. These women took to petitioning Wilgefortis for respite from abuse from the men in their lives. However, if Wilgefortis’s legend is strange, her origins are more curious still.

The Story of the Virgo Fortis

The legend of St. Wilgefortis grew up around the singular image of the Saint. Although details vary from region to region, the essential iconography remains the same. Wilgefortis is depicted as a young girl, nailed fully clothed to a cross. She has flowing hair- and a beard to match. In many- although not all- versions, she is also depicted with one-foot bare, her shoe kicked off in the direction of a kneeling fiddler who is playing to her.

The name ‘Wilgefortis’ is the generic name for the saint, taken from the Latin ‘virgo fortis’ or ‘courageous virgin.’ Some scholars, however, believe it derives from a corruption of the German HilgeVartz or “holy face”. Both names encapsulate the courage of St Wilgefortis – and the divine origin of her miraculous beard, which are preserved in her legend. The tales tell how Wilgefortis was one of the nine daughters of a pagan King of Portugal. Young and beautiful, she had many suitors. However, her father finally agreed to a match between Wilgefortis and a nearby ruler.

The identity of this neighboring royal varies. In some versions, he was a Muslim king, in others a pagan prince of Sicily. Either way, the teenage princess was horrified by the idea of her impending wedding. For Wilgefortis was a devout Christian and had secretly dedicated her virginity to God. She appealed to her father not to press ahead with the wedding- only for her unsympathetic parent to cast her into a dungeon. Desperate, Wilgefortis prayed to god to deliver her. However, she did not ask for her fiancée to meet an untimely end or run off with someone else. Instead, she asked to be made utterly repulsive to him.

God answered Wilgefortis’s prayers. For when she woke the next morning, Wilgefortis found herself with a luxurious, full beard that any man would have been proud of-but that was most unsightly on a young girl. Her betrothed was disgusted and called off the wedding. As for Wilgefortis’s father, he was furious. When he asked what had caused so drastic a change in her appearance, Wilgefortis defiantly declared the god she adored had saved her. Instead of being impressed or cowed by this show of celestial power, Wilgefortis’s father announced: “Then shall you die, like Him you adore.” He then ordered that Wilgefortis, like Christ, should be crucified.

An additional element of the legend tells how, as Wilgefortis hung dying, a poor fiddler knelt at the foot of her cross and began to play to her. Grateful for his comfort, Wilgefortis kicked off one of her golden boots in his direction. The impoverished musician then took the boot to a goldsmith to have it melted down. However, this led to the fiddler being accused of stealing the royal footwear. So, he was condemned to death. However, the fiddler begged for the chance to prove his innocence. Once again, he was allowed to play before the dying princess. Once, again, Wilgefortis kicked off her shoe, thus confirming the truth of his tale.

The Patron Saint of Abused Women

Unlikely as her story was, the tale of St Wilgefortis began to spread about Europe. From around 1350, her image began to spring up in churches in Germany, Italy, Spain, France, Eastern Europe and England. In the Loreto Church in Prague, she had her own Chapel, the Chapel of Our Lady of Sorrows. Wilgefortis even appeared as a feature in the Chapel of Henry VII in Westminster Abbey. People celebrated her feast day on July 20. In fact, St Wilgefortis a favorite Saint until the sixteenth century.

Because of her cruel ill-treatment by the men in her life, Wilgefortis became something of a hero for abused women who came to view her as their champion. The English knew her as St Uncumber. According to Thomas More, the sixteenth-century writer, and statesman, women believed that “for a pecke of oats she will not faile to uncumber them of their husbondys.” This theme of being relieved of troublesome menfolk was a feature of Wilgefortis’s worship elsewhere in Europe- where again she was known by local names. In France, she was St Debarras- “St Riddance.” In the Spain and Italy, she was the spirit of liberation, known as St Librada and St Liberata respectively.

Wilgefortis’s name changes also reflected the local flavor her legend could take on. Her story as it is reflected in the Church of Santa Maria in Bayona, Spain is particularly striking. In the church, Wilgefortis is depicted as St Librada, hanging from the cross in a floral gown. Interestingly, she is not bearded. Nor is any fiddler in attendance. Instead, her eight sisters, Ginebra, Victoria, Eumelia, Germana, Gema, Marciana, Basilisa and Quiteria and their nurse Sila, surround Librada. According to the local legend, all of the sisters, not just Librada were martyred sometime in the second century AD. Their Christian mother had hidden them from their father, the Roman Governor of Spain as babies. Their nurse brought them up in a cave, but once they were grown up, their father rediscovered them. When he found they were Christians, he tried to persuade them to recant. When they refused, he killed them.

The fiddler is absent in other local depictions of the legend. In the Netherlands, Wilgefortis is known as Ontkommer, meaning ‘one who avoids something“. In a Dutch Book of Hours dating to 1415, the saint is depicted as having a full white beard and a halo instead of a crown. She is roped to her T shaped cross, and her long dress covers her feet. Ontkommer is notably absent golden boots and the fiddler. This absence is interesting. For this musician is key to understanding how the legend of St Wilgefortis evolved.

A Case of Mistaken Identity

The Volto Santo of Lucca is a wooden figure on a cross in one of Lucca’s churches. The image on display today is a medieval copy of the original that was supposedly brought to Lucca in the eighth century. The same Nicodemus who helped Joseph of Arimathea deposit the body of Christ in its tomb reputedly sculpted the image. The carving consists of a crowned figure with long unbound hair and a full beard, hanging from a cross. It is dressed in a full-length tunic which enhances the strange appearance of the figure. The Volto Santo looks and sounds just like the depictions of St. Wilgefortis. However, the bearded figure is, in fact, a representation of Christ- not a woman.

The similarities between the Volto Santo and St. Wilgefortis do not end there. For in the twelfth century, a legend began to grow up around this strange Christ figure. It told of a poor fiddler who would play to the statue. One day, as a reward, for his devotion, the statue kicked a shoe over to the fiddler. This shoe was either made of silver or filled with coins- and led to the fiddler being accused of theft. So, to prove his innocence, he insisted on playing to the statue again- and the figure gave him its other shoe.

From this, it is clear that the legend of St. Wilgefortis is a distortion of the femininely dressed Volto Santo. That distortion rose because of a change in artistic fashion. Before the eleventh century, the crucified Christ was usually depicted wearing a long eastern style robe. However, in the eleventh century, trends changed, and artists began to strip Christ down to his loincloth. So when visitors to Lucca saw the Volto Santo, they did not see an old-fashioned cross. Instead, they saw a bearded female martyr. And so, the legend of St. Wilgefortis was born.

However, while the image of a bearded Wilgefortis may have been due to a misunderstanding, that does not mean the legend itself could not be some vaguely remembered truth. The subtle originality and striking local details of the version of Wilgefortis’s story as it is told in Bayona suggest the community was remembering a young woman or women who had died for standing up to overbearing male authority. Such legends could have attached themselves to the stories that traveled from Lucca, creating a hybrid figure of fact and fable. However, more importantly, the story of St. Wilgefortis gave hope to women that, like her, they too could hope for deliverance from their cruel menfolk- one way or another.

Sacred Mysteries: An alarming cult at the seaside, Christopher Howse, The Telegraph, August 2, 2013