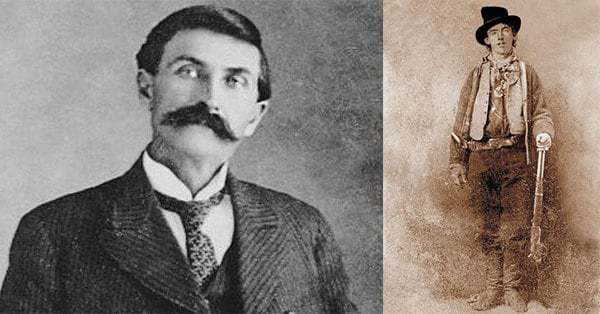 Although Billy the Kid and his gang had escaped at Fort Sumner, they couldn’t evade the reach of the Sheriff for long. Within a couple of days, Garrett tracked the gang down once again, this time in Stinking Springs. There was no escape for the outlaws on this occasion. After a siege that lasted several days, Charlie Bowdre was killed, and the other four gang members were captured on December 23.

Billy the Kid was found guilty of his crimes and was sentenced to hang in New Mexico. However, if Garrett thought he had seen the last of the Kid, he was sorely mistaken. On April 18, 1881, Billy escaped custody and killed guards on his way to freedom; the chase was on once again. Garrett pursued his quarry one last time and arrived at the ranch of Peter Maxwell on July 14 to ask questions about Billy’s whereabouts. It transpired that Billy was staying with Maxwell unbeknownst to the Sheriff.

There are differing accounts of how Billy the Kid died. Some say he walked into a darkened bedroom while others say he woke up in the middle of the night to get something to eat and met his killer in the kitchen. Either way, Garrett was in a darkened room with Maxwell and caught Billy completely by surprise. The outlaw did not recognize his pursuer in the dark and asked â€˜Who is it?’ in Spanish several times. Garrett responded by firing two bullets at the outlaw; one of which hit him in the heart and killed him instantly.

If Garrett thought he would become a hero for killing the notorious outlaw, he was sorely mistaken. While he initially gained fame, things turned sour within a few years. Five days after the death of Billy, Garrett traveled to Santa Fe to claim the reward but the acting governor of New Mexico, William G. Ritch, would not pay the money. Citizens of the state responded by raising over $7,000 in bounty money for the Sheriff and a year after the killing, Garrett finally received his $500.

The End of Garrett’s 15 Minutes

The media of the day claimed that Garrett shot Billy the Kid in a cowardly fashion and turned the Sheriff into a villain and the outlaw into a folk hero. Garrett responded by telling his side of the story in the 1882 book entitled The Authentic Life of Billy the Kid, the Noted Desperado of the Southwest. However, the book fared poorly, mainly because there were eight books on the subject released before it.

While historians originally believed that Garrett’s account of the incident was authoritative, they later found that there were a number of inconsistencies and exaggerations when compared with other books on the subject.

Although Garrett was initially seen as â€˜hero of the hour,’ question marks surrounded the circumstances of the outlaw’s death, so his popularity quickly dwindled. When his term as Sheriff ended in 1882, he moved to Texas and worked with the famous Texas Rangers for a short while in 1884. He resigned his commission within a year and moved back to his ranch in New Mexico. The rest of his life was marked by bad luck and unsuccessful business ventures.

After discovering a large reservoir of artisan water in the Roswell region, Garrett began a series of failed business ventures in the field of irrigation. After losing in his bid to become the Sheriff of Chaves County in 1890, Garrett moved his family to Uvalde, Texas in 1892. He may have stayed there for the rest of his life, but the disappearance of Colonel Albert Jennings Fountain and his son Henry briefly thrust Garrett back into the spotlight.

He became Sheriff of Dona Ana County in April 1896, and after over two years, he achieved what others could not he arrested four men in connection with the disappearance of the Fountains. His deputy died in the pursuit of two of the fugitives, and his efforts were in vain because all four men were found Not Guilty of kidnapping the Fountains and also escaped punishment for the death of Garrett’s deputy. Garrett resigned as Sheriff in 1900.

He had one last chance at glory in 1901 when President Theodore Roosevelt appointed him as U.S. Customs Collector at El Paso, Texas. Garrett even had the honor of being named as one of the President’s three â€˜White House Gunfighters.’ Garrett was involved in brawls during his tenure, and even though the President fielded complaints about the lawman, he stood by his man.

However, he tested Roosevelt’s patience once too often by lying about the identity of his guest at a party who took photos with the President. Tom Powers was not a prominent cattleman as Garrett claimed; he was the owner of a rowdy saloon. The irate President refused to reappoint Garrett in 1905.

Garrett was always a gambler and a lover of alcohol, and when he lost his coveted position as a Customs Collector, he became increasingly morose and turned to the bottle for solace. He was forced to auction off all his personal possessions to help with his debt but raised just $650.

Garrett blew his last chance when his friend George Curry, now the Territorial Governor of New Mexico, offered him a job as superintendent of Santa Fe’s territorial prison. Alas, Garrett had by now moved in with a prostitute, and when Curry found out, he withdrew the offer.

The Death of Garrett

After his son Dudley had arranged to lease the family’s Bear Canyon Ranch to Jesse Brazel for five years, Garrett was dismayed to learn that his tenant was using the land to raise goats. The desperate Garrett asked Carl Adamson if he would buy the family ranch in January 1908.

Adamson eventually agreed, but Brazel refused to break the lease unless Adamson purchased the goats. While Adamson agreed to buy the 1,200 goats, Brazel said there was a mistake and claimed the actual number was 1,800.

On February 29, 1908, Garrett and Adamson traveled to Las Cruces to see if they could come to an agreement with Brazel. Brazel met them, and after a heated exchange, Adamson threatened to walk away from the deal. Adamson and Garrett rode on to Las Cruces, and when Adamson went to relieve himself, he heard three shots. He went to see what happened and saw Pat Garrett lying dead on the ground.

Adamson rode on to Las Cruces and said he did not see who killed the former lawman. While Brazel later claimed he did it in self-defense, he was acquitted after a short trial in 1909. Jim Miller is another suspect, as is Carl Adamson but in the end, no one knows who ended the unfortunate Garrett’s life. There were several cigarette butts found near the site of the murder, so perhaps he was the victim of an ambush?