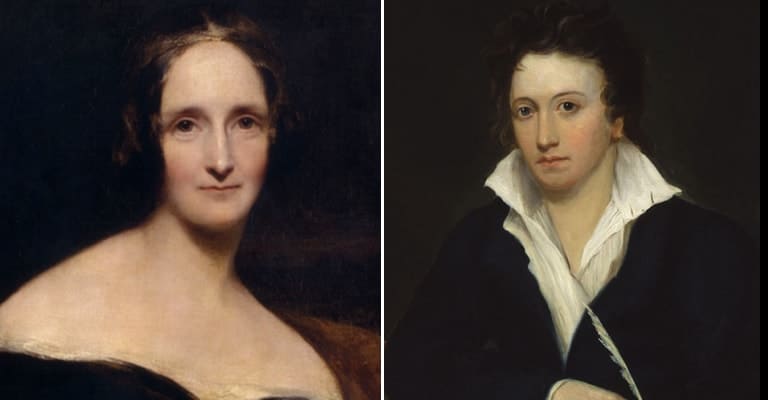 Shelley’s Heart- Or Something Else?

Sir Percy Shelley had the shriveled remains of his father’s heart encased in silver and placed on display in his new home, Boscombe Hall. When he died in 1889, Sir Percy had the heart laid to rest with him, in St Peters Church, Bournemouth, in the same grave as his mother and grandparents. However, it could be that the desiccated lump of flesh that had lain in Mary Shelley’s desk all those years and ended buried far from the rest of his bodily remains with his son was not, in fact, Shelley’s heart but another organ entirely.

In 1885, certain newspapers in London and New York began to cast doubts on the Trelawny’s assertion that Shelley’s heart had survived the heat of his funeral pyre. The accounts were not suggesting that Trelawny had lied, only that he was mistaken and the relic he had rescued from the flames was the poet’s liver. “The heart being hollow it is easily destroyed, “explained The New York Times, “while the liver, which is the most solid mass of the internal organs, resists most intense heat.”

The New York Times was reporting on a piece in the London Athenoeum. The Athenoeum had consulted an expert witness on cremations similar to Shelley’s and that witness had assured the paper that while the flames must have consumed the heart, the liver could have survived the intense heat. Shelley’s liver, the Athenoeum continued, had the added advantage of being saturated in seawater, which would have aided its heat resistance. This being the case, and taking into account that Trelawny, Byron, and Hunt weren’t anatomists, it would have been easy to mistake the shriveled liver as Shelley’s heart- and it probably suited the romantic aspirations of the party to believe it was.

However, there is the faint possibility that the Athenoeum’s witness was wrong and Trewlany was right. For in 1955, an article by Arthur Norman in The Journal of the History of Medicine speculated that Shelley’s poet’s heart could have survived his funeral pyre because it was calcified due to tuberculosis. This meant that Shelley’s heart was just as likely to have survived as his jawbone and his skull. Essentially, this meant that Shelley’s heart, the “epitome of romanticism” in Arthur Norman’s words ended up as, ” a heart of stone.”

Where Do We Get Our Stuff? Here are our sources:

Account of the death and cremation of P B Shelley, The British Library

Recollections of the last days of Shelley and Byron, Edward John Trelawny, Boston, Ticknor, and Fields, 1858