An Ocean of Danger: 5 of History's Most Epic Naval Battles 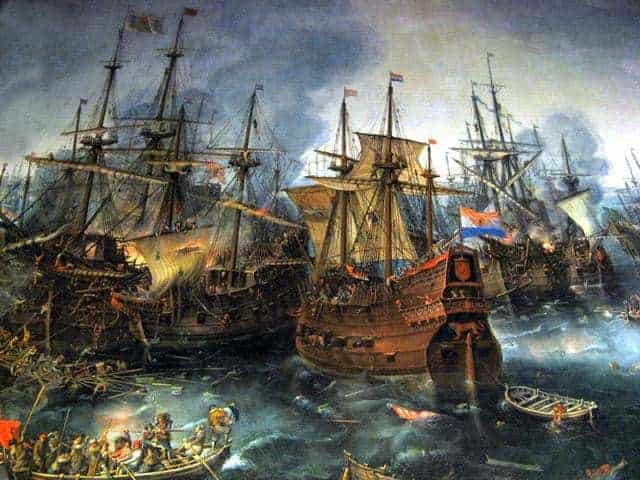 An Ocean of Danger: 5 of History’s Most Epic Naval Battles

22 galleons and 108 armed merchant vessels sailing up the English Channel to confront 34 warships and 163 armed merchant vessels of the English and Dutch line. What led to 8,000 sailors and 18,000 soldiers to jump into ships on a delightful summer cruise to England? Well, like most acts of history we have religion to thank for getting them off their backsides and on the ships. Spain’s Roman Catholic King, Philip II wanted to overthrow the Protestant Queen of England, Elizabeth I.

Philip had form in trying to get rid of Elizabeth, he had previously supported plots that would have seen Elizabeth’s Catholic cousin Mary, Queen of Scots crowned Queen of England. The purpose of the fleet was to assist the invasion of England, the plan was to defeat or at least deter the English fleet and clear the way for an invasion force to cross from Flanders to the southeast of England.

The English did not play by the rules, the invincible Armada was full of ships carrying gunpowder, the English sent eight fire ships, known as “Hell Burners” into the Armada. This tactic meant the Spanish fleet had to break their formation to avoid catching fire. Once the crescent formation was broken the Armada was vulnerable to attack.

The decisive battle happened on July 29, 1588. The battle only ended because the English ships ran out of ammunition. The English ships were quicker and easier to maneuver, they could get in between the Spanish ships and cause damage. The English were helped by the stubborn nature of the Spanish who wanted to fight by boarding ships rather than through cannon fire.

After the battle, Francis Drake was ordered to follow the Spanish fleet with a larger English fleet being guided by the light at the stern of Drake’s ship. Ever the entrepreneur or pirate (you choose), Drake disobeyed orders and doused his light and headed off to loot the stricken Rosario. Drake’s excuse that he had sighted strange sails and believed them to be Spanish did not wash with the commander of the Triumph who commented:

““Drake’s light we looked for but there was no light to be seen… Like a coward, he kept by her [the Rosario] all night because he would have the spoil… We will have our shares or I will make him spend the best blood in his belly.”

Of course, it would be very un-English to court-martial one of England’s naval heroes especially during a period of national emergency.

The southern tip of the Iberian Peninsula has always been seen as a vital military base. It controls the entrance and exit of the Mediterranean Sea and gives access to the Atlantic Ocean. The Strait of Gibraltar continues to be one of the busiest shipping lanes in the world. Europe and Africa are separated by only 7.7 nautical miles. This importance has led the area to have its fair share of naval battles.

The Battle of Gibraltar in 1607 was part of the Eighty Years War, a conflict between the Dutch and the Spanish caused by taxation and once again religion. The battle is a fine example of what military experts would call a rout. 26 Dutch warships surprised and engaged a Spanish fleet of 21 ships which were anchored at the Bay of Gibralter.

The Dutch were commanded by Jacob van Heemskerk, whose previous claim to fame was his attempt to discover an Artic passage from Europe to China, known later as the Northeast Passage. Van Heemskerk was described as “a gentleman adventurer, somewhat proud and lofty”, the gentleman side of his nature was not on show when he sneaked up on the Spanish fleet. Van Heemskerk made sure that the rout would be total, he left a number of ships at the entrance of the bay to prevent the escape of any Spanish ships.

The Dutch fleet was split up, with twenty of the ships sent to attack the Spanish galleons while the remaining ships attacked the smaller vessels. After 4 hours of fighting, 21 Spanish ships were destroyed and 4000 men were lost or killed. The Dutch made sure of the victory by deploying small boats with the aim of killing hundreds of swimming Spanish sailors. The Dutch lost 100 men including their commander, Van Heemskerk, whose leg got in the way of a cannonball, died as a result of the wound.

A battle involving the old foes, France and Great Britain, part of the War of Spanish Succession, a war that spread across the globe. Fighting was recorded in Europe, North America, and South America. The war was over a rather complex succession issue to the Spanish crown and escalated into a world war. On one side we had nations supporting the claim of Charles (known to his followers as Charles III), the English hoped to check and reduce the power of France who supported the claim of Philip V.

The global reach of the war meant that naval power was vitally important. The transportation of troops and supplies to the different war zones became increasingly dangerous, ships had to be wary of engaging enemy ships in battle and there was always the possibility of raids.

One such raid occurred off the Cornish coast near Lizard Point. On October 20, 1707, a large merchant fleet of 80 to 130 English ships left Plymouth for Portugal with supplies for the armies in Spain. Protecting the merchant fleet were five warships under the command of Richard Edwards. The next day saw the fleet move closer to Lizard Point, the southern tip of Cornwall, and the place where the first sighting of the Spanish Armada happened at 3 pm on July 29, 1588.

Two French squadrons of 6 ships each spotted the convoy and the aggressive French officer, Rene Duguay-Trouin led the attack. Duguay-Trouin was a brilliant privateer and capable of inflicting massive damage on the English fleet. Duguay-Trouin would also play an important role in another battle of this period at Rio de Janeiro in 1711.

The battle was an incredible success for the French. The victorious French took the 80-gun Cumberland and the 50-gun ships Chester and Ruby, the 80-gun Devonshire fought valiantly for several hours but the ship caught fire and blew up, only three men escaped from the 500 man crew.

We sometimes forget that military expeditions often grow out of a personal need for money, for example, Francis Drake’s reputation as an English hero overshadows his more murky past as a pirate with a ship to hire. In conflicts that spanned thousands of miles, it was difficult for commanders to get the money to finance their expeditions. Duguay-Trouin at the time of the battle was a man who had fallen on hard times, he was broke, not a gold sovereign to his name, almost bankrupt, the rich pickings of the port of Rio de Janeiro seemed too good an opportunity to miss.

France was also desperate for a victory, and Duguay-Trouin was also guided by a question of honour, in 1706, another buccaneer, Jean-Francois Duclerc had attempted an attack on Rio, the attack failed, the attempt left 600 French soldiers rotting in an inhospitable prison. Duguay-Trouin hoped to liberate these men.

Duguay-Trouin had a fleet of 17 ships carrying a total of 738 cannons and 6,139 men, a huge contingent which was financed not by the French treasury but by private financiers. In an interesting piece of subterfuge the French prepared the ships in different harbours, the British intelligence (who were allied to the Portuguese) tried to warn the Portuguese and dispatched a fleet to blockade Duguay-Trouin before he sailed from Brest, unfortunately, the British fleet were two days late.

The appearance of the French fleet in Rio’s harbour was a surprise to the Portuguese. The Portuguese fleet commander could do nothing but try to get his ships moving. In desperation three battleships were grounded and destroyed by the Portuguese to prevent their capture, the fourth ship fell into the hands of the French and was burned.

The bombardment of the city lasted three days, on the fourth day the French landed 3,700 men to attack the city. The Portuguese defence buckled under the French attack and the Portuguese militia began deserting, this led to the citizens and the governor fleeing the city.

The expedition was a military success for the French, and most importantly for the backers, gained the financial success they needed to make a profit from the battle.

The old naval saying; “when ships were made of wood, men were made of steel” certainly rings true for the brave combatents who took part in these deadly confrontations.