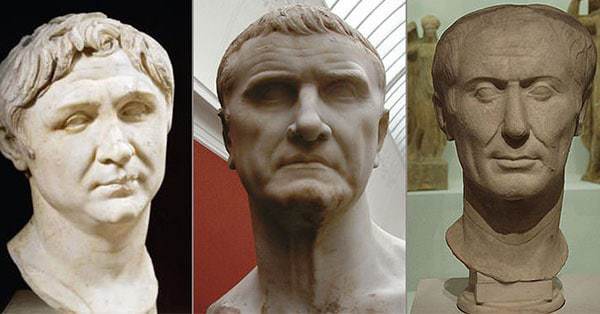 By 54 BC, Pompey was the only member of the Triumvirate left in Rome, and he took full advantage of the situation. By now, everything in Rome was achieved through bribery, and the relationship between Caesar and Pompey became irrevocably strained after the death of Julia, Caesar’s daughter, and Pompey’s fourth wife, in 54 BC.

The First Triumvirate officially came to an end in 53 BC when Crassus died at the Battle of Carrhae. Not only did the alliance lose one of its three main members, but it also lost the man that kept everything together. Crassus had been able to keep Caesar and Pompey on relatively friendly terms. With his death and the death of Julia, the two remaining members of the alliance had no reason to be friendly to one another. There was a deep hatred between the two for a number of years, and Pompey remained bitterly jealous of Caesar’s achievements.

Pompey became Consul in 52 BC, but when Caesar returned, he was wealthy, powerful and ambitious. By now, Pompey had become close to the optimates and was drifting away from Caesar and the populares. After recovering from a serious illness in 50 BC, Pompey became even more arrogant and dismissive towards Caesar. It was in this year that Caesar’s proconsular term expired and the Senate ordered him to disband his army. Caesar wrote to the Senate and said he would do so if Pompey followed suit. The outraged Senate demanded that Caesar disband his army immediately. This was an illegal action as Caesar was entitled to keep his army until his term officially ended.

Caesar was forbidden from standing for the consulship in absentia. He believed he would be prosecuted if he returned to Rome without the protection of a consulship so on January 10, 49 BC, Caesar crossed the Rubicon River. It was illegal to cross this boundary between the Cisalpine Gaul province and Italy for a general leading an army. Cicero remained on friendly terms with both men and wrote to Caesar in March 49 BC. In the letter, Cicero outlined that he remained an advocate of peace and spoke of his concern for Pompey’s rightful position. He concluded by saying that he hoped the two men could reconcile for the peace of Rome. Caesar replied by saying that he trusted Cicero not to interfere and take an ill-rushed action now that things had gone Caesar’s way.

Whatever hope Cicero had for peace was dashed when Pompey left Rome with his army in 49 BC, and Caesar quickly followed him. The following year, Caesar defeated Pompey at the Battle of Pharsalus despite being heavily outnumbered. While Pompey escaped the battlefield, he was not so lucky when he landed in Egypt as he was murdered on the orders of Ptolemy XIII.

While The First Triumvirate probably hastened the end of the Roman Republic, the truth is, the end was nigh for some time. Rome was rife with corruption and greed, and it was only a matter of time before someone emerged to take complete control. Caesar appeared to be that man, but his death in 44 BC led to more turmoil. Eventually, Octavian was the last man standing.