Richard III’s Bed and Fabled Treasure Led to a Murder... and Some Say a Very Persistent Ghost 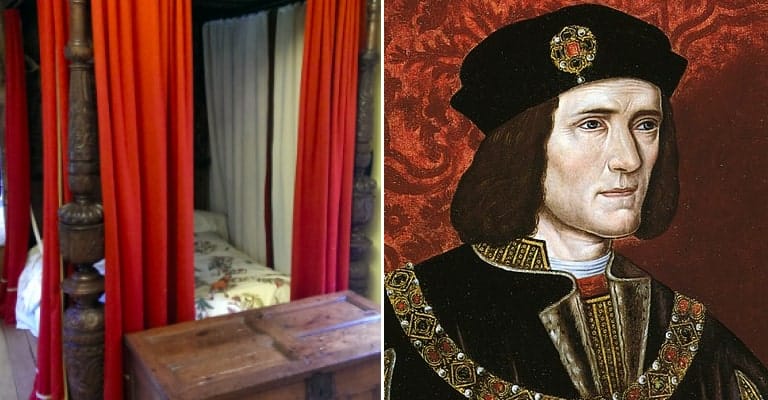 The English City of Leicester has had a Blue Boar Inn Since the Middle Ages. While its latest incarnation is a micropub selling craft ales situated down a side street, the original Blue Boar Inn was a much grander affair. The medieval equivalent of a luxury hotel, the first Blue Boar Inn was situated along Leicester’s Medieval High Street where it offered food and accommodation to the ordinary townsfolk, wealthy travelers- and royalty.

For Leicester’s, Blue Boar Inn was the last Inn to play host to Richard III as he made his way to do battle at Bosworth Field. Expecting to return, the King left his bed behind-as well as a secret, fabled treasure hidden within it. The bed and treasure remained at the inn long after his death, leading to the murder of the Blue Boar’s landlady in 1604. And so began one of Leicester’s strangest ghost stories. For not only did the ghost of the murdered landlady, Agnes Clarke returned to her former home and business, but it also demonstrated an unusual attachment to the name of the Inn.

On August 20, 1485, Richard III began his journey to Bosworth Field from Nottingham. Rather than travel the distance in one day, he decided to pause and spend the night in Leicester. Richard had visited Leicester several times as the town’s Castle was part of the Royal estates. However, by 1485, Leicester Castle was not fit for habitation by the monarch. So, instead, Richard and his entourage commandeered the best Inn in Leicester.

The name of that Inn at the time was The White Boar. Whether this was by coincidence or design is not known- for the white boar was also Richard’s personal emblem. Less than fifty years old, The White Boar was Leicester’s premier coaching inn. For although it’s Great Hall catered as a tavern for the locals, The White Boar also provided comfortable catering and accommodation for wealthy travelers. It was the medieval equivalent of a grand hotel. Visitor’s horses were stabled in the lower courtyard at the back of the inn while those who could afford it would take rooms on the first floor.

Although each room was large enough to accommodate four people, naturally King Richard had one all to himself. It was the best room in the house. It had a view of the street; a large fireplace and its exposed rafters were decorated in painted red, black and yellow scrollwork rather than left bare. King Richard, however, did not use the furnishings provided by the inn. For he was very fussy about where he slept. So, his own bed, which traveled with him was assembled and made up in his appointed room. Here he spent the night before riding out of Leicester the next morning. Meanwhile, the bed was left in place, to await his return.

Richard never slept in his bed again. He spent the night of August 21 camped outside Bosworth. Then, on August 22, he was killed in battle. Later that day, the last Plantagenet monarch did indeed return to Leicester- but as a naked, mutilated, corpse that was left on public display in the Church of St Mary of the Annunciation. Meanwhile, the Landlord of the White Boar Inn was conscious that it wouldn’t do to associate closely with the old regime. He set about repainting the white boar blue- and changing the Inn’s name. And so, The White Boar Inn became The Blue Boar, after the symbol of John de Vere, the Earl of Oxford- and the new King, Henry VII’s general.

The Murder of Agnes Clarke

King Richard’s bed remained in the newly named Blue Boar Inn. Whispers of treasure now began. For it was rumored that the doomed King had left behind a fortune in gold and silver hidden somewhere in the bed. Countless people checked and were disappointed. Then, sometime around the turn of the seventeenth century, the treasure was reputedly found. The Inn’s then landlord, Thomas Clarke was reputed to have found King Richard’s gold in a false bottom of the bed. The locals reasoned the treasure was the only way Thomas and his wife Agnes, could have become affluent enough for Thomas to be appointed Lord Mayor of Leicester.

By 1604, Thomas was dead, and Agnes was running the Blue Boar Inn alone. One night, a petty criminal called Thomas Harrison stopped at the Inn. While there, he heard the legend of King Richard’s treasure and The Clarke’s good fortune. Scenting an opportunity, he decided to stay on for a few days and find out more. During his stay, Harrison seduced one of Agnes Clarke’s servants, a maid named Alice Grimbold. Alice told her new lover that her mistress did indeed have a considerable amount of cash locked away in her private quarters. So, together, Harrison and Grimbold hatched a plot to rob Mistress Clarke.

On February 3, 1605, a man called Edward Bradshaw arrived at the Blue Boar Inn and took a room. He was no ordinary guest but the advance party of a group of thieves sent by Harrison to rob the Inn. At around 10 pm that night, seven surreptitiously arrived and were let in by Grimbold. Together with Harrison, they overcame the servants and tied them up- while Harrison took Alice Grimbold up to Agnes Clarke’s parlor. There, they tied up Mistress Clarke. Meanwhile, Grimbold used her Mistress’s keys to search the coffers while Bradshaw kept an eye on the captive.

In all, Alice discovered six or seven bags of gold and silver. In 1604, the haul was worth between £300-£500. Today, it would have been valued at between $98,853.68- $164,756.14 or £76,000-£126,000. Bradshaw and the thieves then fled, leaving Grimbold with her share of the loot and a promise to return for her. It was a promise Bradshaw never kept- probably because before he fled, he killed Agnes Clarke. Bradshaw later claimed that the landlady’s death was an accident and he only stuck his fingers down her throat to silence her. However, whatever the reason, Agnes Clarke choked to death.

Agnes’s body and the robbery were discovered. So too was Alice Grimbold’s incriminating stash of cash – and her role in her Mistress’s death. Grimbold confession led to Bradshaw arrest. In March 1605, he was hung for murder and robbery in Leicester. The same court convicted Alice Grimbold as an accessory to the robbery and murder of her mistress. As this was petty treason, Alice was burned alive. Meanwhile, King Richard’s bed now became quite infamous, and the inn’s new landlord began to show it to visitors for a penny. Soon, however, there was another talking point about The Blue Boar Inn.

The Haunting of the Blue Boar Inn

Shortly after Agnes Clarke’s death, the new owners and the locals noticed a white, misty apparition that resembled a woman manifesting about the Inn. The ghost did not harm anyone and quietly glided about the place. It was widely presumed, however, that the mysterious female apparition was the restless spirit of Agnes Clarke. Agnes’s ghost remained peacefully in the Blue Boar for the next couple of centuries. Then, in 1836, Leicester’s authorities decided the old timber medieval building was out of place in the new Leicester of brick and stone. So they decided to demolish the historic Inn.

By the end of March 1836, the Old Blue Boar Inn was no more. However, another incarnation of the Inn was built just a few streets away down Southgate Street. The new Blue Born Inn was no grand hotel. Instead, it was an ordinary, everyday tavern that became very popular with the locals. There was, however, one other thing the two inns had in common apart from their name: The ghost of Agnes Clarke.

For while most ghosts seem to haunt places, it appears Agnes Clarke was haunting the concept of the Blue Boar Inn. When her old home was demolished, and its’ name reassigned, her spirit simply upped sticks and moved with it. Agnes soon became an accepted part of the new Blue Boar Inn, and each successive landlord acknowledged her as such. Until 1958, when Frederick Mason took over. Fred did not believe in ghosts and had no truck with the locals’ stories. However, not long after he moved in, he was subject to a series of unfortunate coincidences.

Firstly, Fred fell down the cellar stairs and broke his ankle- an accident he attributed to pure bad luck. Then he caught a cold that turned into a hacking cough so bad that he cracked a rib during a coughing fit. Still, Fred put his illness down as one of those things. However, when he woke one night to the sight of a white figure moving towards the foot of his bed, Fred Mason suddenly became a believer in the ghost of Agnes Clarke. Agnes satisfied that the new landlord had finally acknowledged her, never bothered him again.

In the 1960’s, a post-war desire to modernize Leicester meant that much of Southgate Street was scheduled for demolition and redevelopment. So, by 1965, the Blue Boar Inn was abandoned and boarded up. However, Agnes’s ghost remained in the deserted pub. One night in 1965, a patrolling policeman paused outside the abandoned building. Suddenly a volley of stones showered down on him from the empty building. Where a group of local youths playing a prank? Or did the disgruntled spirit of Agnes Clarke perceive that once again she was going to lose her Inn? Agnes’s spirit never located any of the subsequent Leicester pubs that have taken up the name of the Blue Boar Inn. However, the misty figure of a woman has been sighted about Leicester’s Southgate.

History of the Blue Boar, University of Leicester