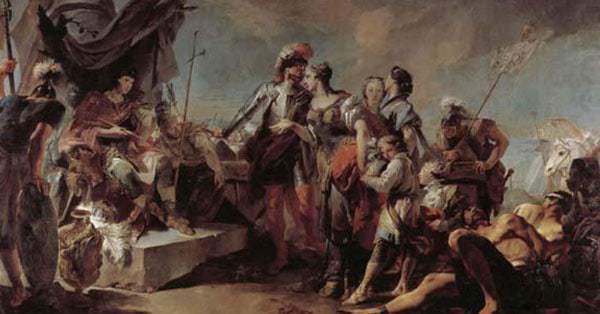 4 – He Tried & Failed To Solve the Roman Coinage Crisis

One of Aurelian’s failures was unquestionably his attempt to reform the silver coinage. The Roman silver coin had been massively debased in the previous 40 or so years. When Septimius Severus was emperor, the coin contained 50% silver compared to the 98% silver coins during Octavian’s reign. Successive emperors further debased the coinage, and when Aurelian came to power, the coin contained just 1.5% silver.

The most predictable outcome of this debasement was high inflation and a complete loss of confidence in the entire Roman monetary system. Another consequence of this debasement was the utter collapse of copper-based coinage in Rome. The issue of lower denomination coinage in copper, bronze, and orichalc practically came to a halt. The workers in the mint in Rome were also engaged in fraud, and this was probably a major reason for the riots of 271.

After the riots, Aurelian immediately introduced a minor reform of the coinage to put a stop to the worst excesses of debasement, but the numerous threats on the Roman frontier meant he didn’t have time to implement a longer-term plan. However, he tried again in 274 once he had defeated most of his enemies. The improved situation of the Empire meant there was an increase in revenues. Aurelian also raised taxes on the wealthy which naturally drew their ire. In reality, he had little choice because the Empire’s treasury was empty because of mismanagement and war along with the temporary loss of control of certain parts of the Empire until Aurelian recovered them.

In late 273 or early 274, Aurelian began the biggest overhaul of Rome’s monetary system since the reign of Octavian. He had tried to adhere to the three metal system of gold, silver, and bronze at the start of his reign but no bronze coins were issued until the great reform of 273/74. The precious metal content of gold and silver coins was increased; the latter was probably up to 5% silver. While he managed to remove the â€˜bad’ coinage from Rome and the whole of Italy, he was less successful in the provinces, and practically no low-quality coins were removed from Gaul or Britain.

It is important to note that by issuing new coins and removing the old ones from circulation, Aurelian wanted to remove the images of old emperors across the Empire and substitute them with his own. Ultimately, his attempts at coinage reform were unsuccessful because, by the beginning of the Fourth Century AD, the price of goods in Rome had escalated to an incredible level. Diocletian issued an edict on maximum prices, but that too was a failure as prices continued to rise.

5 – He Was Assassinated Because of a Forged Letter

For centuries, Roman generals and emperors knew that successful subjugation of Parthia was almost a guarantee of eternal glory. From Crassus’ folly in 53 BC to the defeat and death of Valerian in 260 AD, the Roman Empire often encountered problems when they tried to invade the east. In 274, Vahram became the new king of the Persian Empire, and he had to deal with internal problems of his own. As such, he was in no position to invade Rome.

Aurelian felt that he had everything in hand back home, so he chose to invade Persia while it was weak instead of waiting and being forced to defend the Eastern provinces at a later date. He assembled his army in Illyricum and declared war on Persia in the summer of 275. Previous Roman generals were often diverted from the path when marching east, and Aurelian was no different as he seemingly had to deal with trouble near the Danube. It was there that he met his death via assassination.

The details surrounding his death vary depending on the source you read. For example, Zosimus wrote that a court official named Eros came up with the plot. Eros had made a blunder and was frightened that Aurelian would punish him severely. He forged a so-called hit list which was filled with names of people that the emperor was allegedly going to purge. The army officers that were â€˜marked for death’ decided to act first and kill Aurelian. Aurelius Victor blames an unnamed secretary for the plot while the Historia Augusta suggests that a man named Mucapor was the perpetrator.

The reasons why Aurelian was assassinated are probably a bit more complex. If there was really a hit list and the officers quickly accepted that it was genuine and moved to kill their ruler, it suggests that they all carried secrets. Aurelian had a reputation for quickly and decisively eliminating perceived threats, so no one on the list was prepared to take chances. It is also noteworthy that his assassination was a hastily carried out plot. This is obvious because there was no immediate successor.

Aurelian was probably murdered in September or October 275. We will never know if he would have continued his legacy with a victory over the Persians or ruined it with defeat. The army apparently tore his assassin to pieces, and all the other plotters supposedly died soon after. The army asked the Senate to name Aurelian’s successor, but the Senate passed the buck by telling the soldiers to name someone. They refused to comply, and the result was an interregnum of around eight months before the Senate finally named Tacitus as the new emperor.

Overall, there is an element of unfinished business about Aurelian’s reign. He was only the Emperor of Rome for around five years, but he achieved an extraordinary amount in that period. He earned his name â€˜Restorer of the World’ as he saved the Empire from destruction and helped end the Third Century Crisis. Critics of Diocletian suggest that he took credit for the achievements of Aurelian and other emperors such as Probus and Gallienus. Aurelian’s funeral was arranged in Thrace which ensured he was the first Roman Emperor not to be interred in Rome. Aurelian was deified by the Senate soon after his death, possibly at the behest of Tacitus.