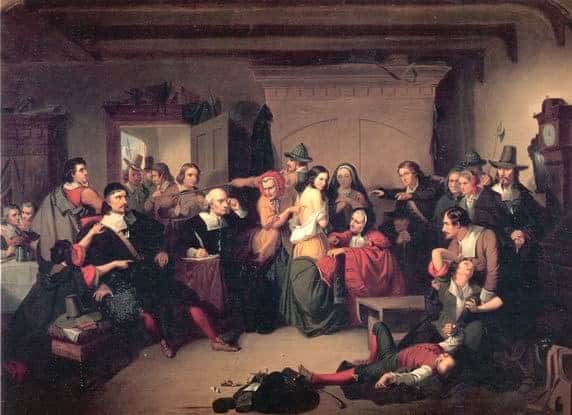 16. Puritans believed that witches were the spawn of Satan and had to be eliminated

Zealous Puritan ministers increasingly became concerned about the increase in migration into New England in the mid-1600s. The arrival of so many non-Puritans posed a serious threat to the Puritan ideal in establishing a “holy commonwealth.” To thwart Satan’s influence they preached from the pulpit that it was the responsibility of their congregants to weed out the “double-tongued” and those that had an “unruly spirit.” Mass hysteria ensued. Neighbors accused neighbors of witchcraft simply for typical neighborly squabbles. A single misstep could result in hanging from an Elm tree.

To prove that one was not a witch or wizard, the accused had to undergo various types of examinations. These examinations could range from being stripped naked while ministers or their representatives search for a third teat. If one was present the accused would have to sit in a room for 24 hours while bystanders waited to see if a small sprite or imp came to feed. This would look a lot like a breastfeeding mother! Others would have to prove that they were not a witch by staying underwater for 30 minutes. If they floated to the surface, they were a witch and would be hanged. If they did not float to the surface they were not considered a witch and therefore innocent. Of course, the innocent drowned.

Puritan judges permitted circumstantial evidence and here-say to prove guilt during witch trials. Between 1647 and 1662 fourteen people had been executed for being a witch in New England. Most of the hanged were older women. During the hysteria of 1692 in Salem, the judge permitted visions seen only by a few young women to be entered as evidence at trial. Of the 175 people put on trial for witchcraft, 19 people were executed.

The quest for Puritans to create their version of a “City upon a Hill” became their undoing. The King of England took notice and enforced policy that prohibited executions for frivolous accusations. Judges were no longer able to sentence people to death for speaking out of turn, disagreeing with ministers, or being witches. Ironically, the King’s control over his growing North American colonies would eventually lead a war of revolution by the end of the 18th century.

Hollitz, John, Thinking Through the Past: A Critical Thinking Approach to US History Vol. 1: To 1877 5th ed. Cengage Learning, 2015.

The Whipping Of The Quaker Women. Dover Public Library.