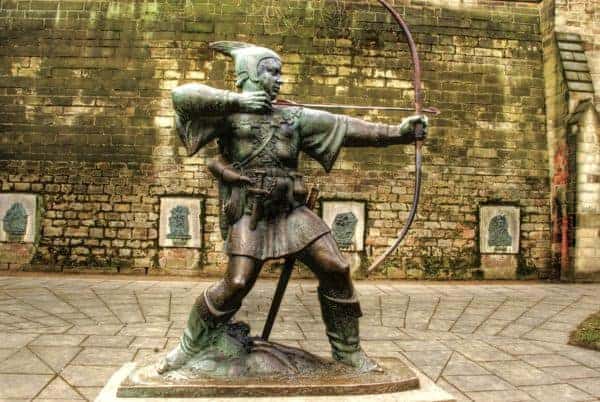 Robin Hood is probably the most well-known outlaw of medieval times. But he is also a legend, at best a hybrid, idealized version of the outlaws at large in England between the eleventh and fourteenth centuries.

These outlaws were sometimes rebels, fighting against authority. Often, they were displaced through injustice. Like Robin Hood, they may have evaded the law with the help of friends amongst the clergy and the minor landed gentry. But they were also ruthless survivors and cut throats. Even if they robbed the rich, certainly didn’t give to the poor.

These real Robin Hoods may have provided the inspiration for the legend. But they also show the reality behind the romance. Here are just five of them.

Hereward the Wake or ‘the watchful one’ as his nickname translates, was an eleventh century Saxon/Danish thane and freedom fighter that led a fenland revolt against William the conqueror.

Hereward was the son of a Lincolnshire squire. The facts of his early life are sketchy. Edward the Confessor was said to have declared Hereward an outlaw prior to the Norman Conquest and sent him into exile on the continent. At the time of the Norman Conquest, he was working as a mercenary. By the time he returned, the Normans had appropriated his lands.

What is certain however is that Hereward led a revolt against the Normans. He objected to the appointment of a Norman abbot at Peterborough- especially as his Uncle had been the previous incumbent.

In 1070, a Danish fleet appeared in the fenland waters around the Isle of Ely in Cambridgeshire. Many of the local people were of Danish descent so they were heartened by the appearance of the Danes, who they hoped would help them throw off the yoke of their Norman masters.

Hereward and a band of outlaws joined with the Danish forces to loot and sack the monastery at Peterborough. However, once the abbey’s treasure was secure, the Danes quickly made a deal with King William and sailed away. After all, they were in it for the profit, not the principle.

Hereward and his men were left alone to face the King’s men and were driven to the Isle of Ely, where they made their last stand. In 1071, William attached the causeway to the island with his ships. The island was surrendered to the king’s forces when the monks revealed a secret entrance to the King’s forces. Hereward was forced to flee, disappearing into the fens and so into legend. Like Robin Hood, he became a figurehead of resistance to the tyranny of the elite.

Born in the village of Swannington, northwest Leicestershire sometime around 1260, Roger Godberd was a thirteenth-century outlaw whose life and career bore an uncanny resemblance to Robin Hood- even down to the area of his activity.

Godberd became an outlaw after serving with Simon de Montfort, the ill-fated Earl of Leicester, who led a revolt against his brother in law, Henry III. After De Montfort lost the Battle of Evesham in 1265, Godberd was outlawed for fighting against the king-as was Robin Hood according to the fifteenth-century writer Waler Bower.

So Godberd fled to Sherwood Forest where he lived for four years. His anti-establishment credentials and military experience made him a natural focal point for the displaced and he managed to build up a band of a hundred men around him.

Godberd was eventually captured in the grounds of Rufford Abbey and taken to Nottingham Castle with some of his gang. But like Robin Hood, he managed to escape- and was protected by Sir Richard Foliot, who hid the gang from the sheriff of Nottingham-until the King’s forces arrived.

Godberd was eventually permanently captured in 1275. For three years, he was held captive in three different prisons awaiting trial. Here the story varies. Some sources say that he was tried at the Tower of London but pardoned by Edward I on his return from the 8th crusade. Godberd then returned to his farm where he lived until his death. But other sources claim Godberd never reached trial, dying in Newgate prison in 1276.

The 14th century was a bonanza time for outlaw gangs in England. Plague, famine, and depopulation led to widespread social unrest, with the peasant revolt and the rise of the heretic Lollards just two of the signs of the upheaval. Desperate times also produce desperate men and Adam the leper and his gang were amongst the most ruthless and daring of the fourteenth-century gangs.

All that is known of Adam are his crimes. His gang was active in the south east of England sometime in 1330s and 1340s. The gang did not bother hiding in the forest to waylaying passing travelers. Instead, they were an urban gang who took bolder measures

One of the gang’s favorite methods was to wait for towns to have fairs-then they would descend. While householders were at the fair, the gang plundered their unguarded homes, setting them on fire afterward. The distraught householders were generally too busy trying to save their houses and remaining possessions to give chase.

Like Robin Hood and his merry men, Adam and his gang would also hold the wealthy to ransom. However, unlike Robin, who did not harm his victims, he was not a particularly gentle ‘host’. “men and women were captured” said Luke Owen Pike in his “History of Crime in England“. “Ransom was extracted on the pain of death and even those who paid it might think themselves fortunate if they escaped some horrible mutilation.”

But like Robin Hood, Adam’s gang was bold-so bold that they were audacious enough to target royalty. In 1347, the gang descended upon Bristol and robbed several ships in the harbor belonging to King Edward III. But their greatest coupe was in London. Here, the gang targeted a jeweler who held some pieces belonging to Queen Philippa. Adam and his men laid siege to his house, demanding the jewels. When the jeweler refused, they set the building on fire and seized the jewels by force. But this time, the victims gave chase, when the King sending Thomas, Lord Berkley after the gang.

Adam was caught and brought to justice in Winchester. But his outlaws staked out the courtroom, attacking everyone who came out. They caused such trouble that the authorities had to let the outlaw leader go., free to continue his life or crime.

John De Folville, Lord of Ashby Folville had seven sons. After his death in 1310, his eldest son, John took over the estate. But his other six sons formed a notorious medieval gang that terrorized Leicestershire throughout the 1320s and 1330s.

The first of their crimes occurred on 29 January 1326, when a Master Roger Bellers was found murdered. His death was laid squarely at the door of “one Eustace de Folville and his brothers”.

Bellers was a greedy fellow, guilty of persecuting and threatening the De Folvilles, as well as many of his other neighbors. So this initial murder may have been tolerated if not secretly well received by locals and very much reminiscent of the just causes of Robin Hood. But it outlawed the De Folvilles.

However, in 1329, the King pardoned them – on the condition that they fought for him. This reconciliation with authority did not last. While part of the garrison of Leicester, the gang robbed the town burgesses. In 1330, the pardon was revoked.

The de Folvilles made such a nuisance of themselves that in 1331, the King’s justice Richard de Willoughby was sent to deal with them. Richard de Folville, “a wild and daring man and prone to acts of violence”, who was also the Rector of Teigh, kidnapped Willoughby and only released him after he paid his kidnappers 90 marks and swore an oath to “comply with their instructions” -which was presumably to protect them from outlawry.

Eustace de Folville, the eldest of the gang, managed to elude justice, dying a natural death in 1347 having served the King in the Hundred Years War. However, justice caught up with Richard de Folville when, in 1340, the ruthless rector and two of the gang were run to ground in Richard’s own church. A stand off occurred. Father De Folville killing one man with his bow before he was eventually dragged from the church and beheaded.

Because he was a priest, Richard’s death was deemed unlawful. So his killers had to do penance by praying for forgiveness outside all the neighboring churches before being publicly beaten with a rod!

Like their contemporaries and near neighbors, the De Folvilles, the Coterels were another family affair, active in the peak district and Nottinghamshire between 1328-1333. Led by James Coterel and three of his brothers, outlawry was just another part of the Coterel’s business portfolio. Although they were only younger son’s, the Coterel’s had their own land and property, even receiving rents while they were hiding out in Sherwood forest.

The gang’s first recorded crime was in in August 1328. Robert Bernard, the ousted parish priest of Bakewell in Derbyshire, paid the Coterels to beat up and rob his successor. Bernard had been driven out of his parish for embezzling funds and was jealous of his successor. Enforcement became the Coterel’s mainstay- not for the poor and friendless, but the clergy and gentry. These well-placed contacts-which included at least seven members of Parliament, also protected the Coterels, helping them evade arrest-and ensuring anyone who crossed them felt the full force of the law. When Robert del Ille de Wight was accused of burning down the house of William de Bucstones, a Coterel henchman, he was swiftly brought to justice.

The Coterel’s had no problem recruiting members- hardly surprising considering the protection the gang enjoyed. Even Roger de Wennesley, Lord of Mappleton who was sent to arrest the Coterels in 1330 ended up joining them! Members of the clergy also joined the gang. Some of these real life Friar Tucks were amongst two hundred gang members who were arrested in November 1331 when the Sheriff of Derbyshire and Nottinghamshire finally moved against them

But like Adam the Leper and the De Folvilles, the Coterels evaded justice. Although Laurence was stabbed during an attempted arrest in 1330, Nicholas Coterel became Queen Philippa’s bailiff for the High Peak and would lead an army of archers into Scotland.

And James Coterel, the gang’s leader? Well, he ended up in law enforcement. In November 1336 as the arresting officer of a Leicestershire parson accused of illegal activity.