5 Ways the Trans-Siberian Railroad Set the Stage For WWII 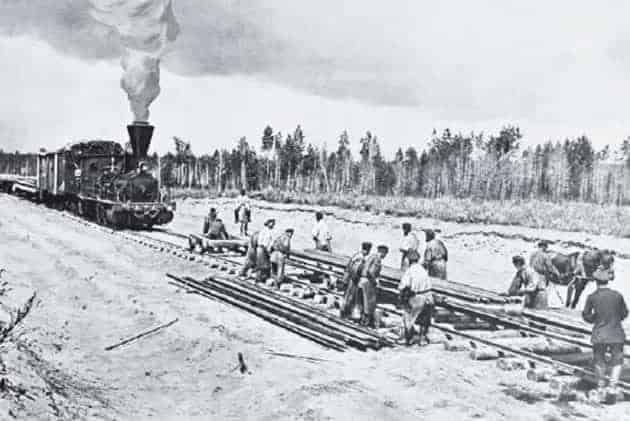 5 Ways the Trans-Siberian Railroad Set the Stage For WWII

The Trans-Siberian Railroad is an engineering feat. One of its many impressive features is its size; it is the longest railroad in the world. It spans bridges, eastern and western cultures, and passes through eight time-zones. To travel the entire distance without stopping takes eight days. The rail line’s foremost route connects Moscow to Pyongyang; its secondary route connects Kiev to Vladivostok.

Construction began on the Trans-Siberian Railroad in 1891 and finally ended in 1916, one year before the Russian Revolution. Between those years, the railroad impacted the world on a variety of fronts – beginning with the Japanese, whose confidence was inflated as a result of winning a conflict with Russia. Japan began an imperial march until finally stepping on the toes of the United States, which eventually precipitated its entry into the Second World War. Below are 5 ways the Trans-Siberian Railroad set the stage for World War II.

Too Close For Comfort: Russian Rail Expansion Into Manchuria Erupts In A War With Japan

The purpose behind building the railroad was an increase in power through an increase in economics. It was believed that Siberian natural resources should be utilized. The economic prosperity would result in an increase of political power for Russia. Included in this plan was the idea to expand trade with the far east, which meant extending the rails into Asia. Japan was suspect about their Russian neighbors, and did not fully understand their intentions.

When Russia and China agreed that the railroad would reach into the north of Manchuria, Japan was enraged. Rather than accept that Russian interest in a Manchuria line hinged only on making the rail more efficient, Japan saw the deal between China and Russia as a gesture of Russia’s desire to expand its empire into Manchuria. The gesture was all but confirmed; in 1900, the Russian Empire sent nearly 200,000 troops into Manchuria. Because of the Trans-Siberian Railroad, the power structures of the east found themselves thrust headlong into a brand new geopolitical sphere.

Russian was not just on Asia’s doorstep, they were inside. Japan was convinced the railroad meant Russia would continue expanding throughout East Asia. Russia was not about to turn its engines back, and Japan was not about to let go of the threat it was witnessing. In 1904, Japan and Russia went to war following a Japanese attack on Russian ships anchored in Manchuria’s Port Arthur. The conflict devastated Russia — the Japanese took advantage of the fact the Trans-Siberian Railroad was still under construction; this hindered Russian ability to move troops eastward efficiently. Also slowing movement down was the fact that the rail line consisted only of one track. This limited how many trains could be running at any one time.

The oversights were embarrassing and costly; the Russian Empire lost nearly 200,000 soldiers, and by the war’s end had to hand territory over to Japan. This fed the next chapter of war; Japan used the Russian victory to tout its military prowess throughout East Asia. Japan continued to seize land and expand its imperial determination that eventually began to worry the United States as the Japanese inched closer to the South Pacific islands of Hawaii over time.

Stuck In The Middle With You: Ukraine Is Trapped Between Enemies

Another political, cultural, and economic impact of the rail line can be traced back to 1906. That year, an estimated 1.6 million Ukrainians migrated east with the use of the line. The country of Ukraine did not exist at that time – the term Ukraine defined the geographical location but not much else.

Nonetheless, the region was precariously positioned. On one side was the Austrian Empire whose Triple Alliance pact sealed Austria-Hungary, Germany, and the Kingdom of Italy to the same fate. Over the Ukraine’s other shoulder was the Russian Empire whose Triple Entente pact aligned it with the French Third Republic and the United Kingdom.

When the Ukraine territory entered World War I, half the country fought on the side of the Russian Empire. The other half fought on the side of the Austrian forces. The mass Siberian migration, coupled with having to choose between allies, helped shape what became a national identity and eventually blossomed into a desire by the Ukrainian people to have autonomous country of their own.

In 1917, when the Russian Revolution was in full swing, the Ukrainian People’s Republic gathered momentum, and by 1918 the Ukraine announced its independence.

The migration from the Ukraine region to Siberia made possible by the construction of the Trans-Siberian Railroad peaked in 1914, when World War I erupted.

Between those years, around 4 million Ukrainian people arrived in Siberia, where they were most likely to find work as farmers. The railroad was never meant solely for moving people, it’s purpose was open trade.

Cars were filled to the brim with wheat and transported to various regions. By the onset of World War II, the rail line played a leading role, serving as a link between Germany and Japan, while Russia sat back leaning on its decision to remain neutral. Natural rubber was in high demand.

Rubber was used for tires for military trucks in at least half the war machines. The Axis powers (Italy, Japan, Germany) had control over the world’s rubber resources with Japan in the lead. The country had been using rubber to build and sustain its industrial boom. Meanwhile, there was a massive push for the advent of synthetic rubber in the U.S. and Great Britain.