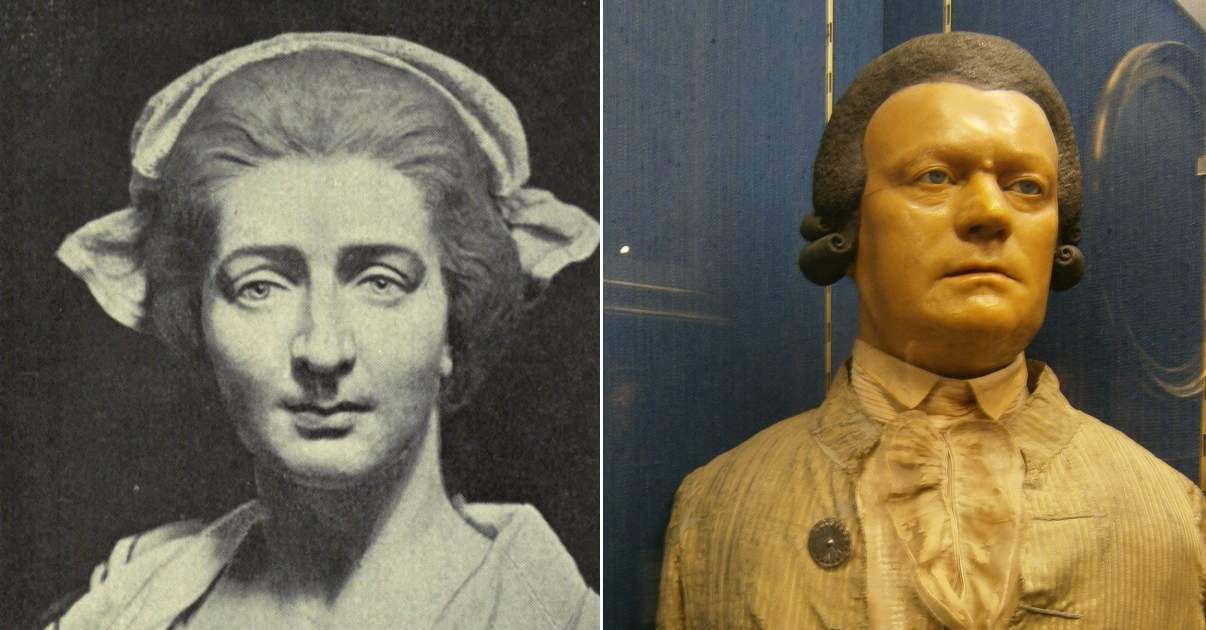 Madame Tussaud’s wax museums are famous across the world, notable for their remarkable lifelike figures of the rich and famous. The story of the founder of Tussauds wax museums, however, is potentially more fascinating than any of the exhibits. For Madame Anna Maria Tussaud was an artist and a survivor. She narrowly escaped the guillotine during the French revolution only to find herself serving the regime that nearly took her life, making death masks of her former employers. In her forties, she found herself a single mother, stranded alone in a country whose language she could barely speak.

Against the odds, Madame Tussaud not only survived but flourished, establishing a legacy that endures to this day. The original London attraction, founded by Marie Tussaud and her sons in the early nineteenth century, still pulls visitors from across the globe. Since then, Tussard waxworks have sprung up across the world with branches in places as diverse as Amsterdam, Blackpool, Beijing, Bangkok, New York, Hollywood, Singapore, and Delhi- to name just a few. Here is the story of their remarkable founder.

Madame Marie Tussaud was born Anna Maria Grosholtz on December 1, 1761, in Strasbourg, part of the Alsace region straddling France and Germany. When she lived in Britain, Madame Tussaud claimed she was Swiss- probably because of the tension that could have been caused by being a Frenchwoman living in a country at war with her own. In fact, her family only moved to Bern in Switzerland when she was two after her widowed mother took a post as a housekeeper with a local doctor, Philippe Curtius.

Marie became very close to Dr. Curtius who came to regard her as a niece. Besides being a medic, Curtius had an interesting sideline: he was a waxwork artist. Initially, Curtius created models linked to his work; anatomical facsimiles, which were made by taking an impression of the body part, then creating a clay mold to hold the molten wax that formed the model. Very soon, however, his interests extended into portraits. As soon as she was old enough, he began to instruct Marie in the art.

In the 1780s, Curtius moved to Paris to establish a wax portrait firm and the Grosholtz family quickly followed him. Curtius became a success in Paris high society – and royal circles. He created a waxwork of Madame du Barry, the last mistress of Louis XV and began exhibiting his work. At the same time, Marie was becoming a waxwork artist in her own right, creating molded portraits which she then painted and tinted and adorned with hair to create a lifelike model of her subject. She became so skilled that it was said to be impossible to tell her work and Curtius’s apart.

Her first solo portrait was of Jean Jacques Rousseau in 1778, shortly after the philosophers’ death. Models of Voltaire and Benjamin Franklin followed. By this time, Marie had joined the royal court at Versailles as the artistic tutor of Madame Elisabeth, the sister of Louis XVI.

Or, so her 1838 memoir claimed. “Madame Elizabeth, the king’s sister and being desirous herself of learning the art of modelling in wax, Madame Tussaud was appointed to teach that princess, who, from having her young protégée often with her, became so attached to her, that she applied to M. Curtius to permit his niece to reside at the palace of Versailles,” Marie later recalled

Memoir aside, there is no actual documentary evidence to prove that Marie Tussaud was ever at Versailles. However, it is not impossible, for her family was already connected to the court. Aside from her patron, Dr. Curtius, at least three of her brothers were part of King Louis’ Swiss Guard. They were serving at the Tuileries Palace on August 10, 1792, when it was attacked by revolutionary forces just before the beginning of the Reign of Terror.

In the Shadow of the Guillotine

Whatever the exact nature of Maries’ royal connections, they almost cost her life. During the Reign of Terror, the Committee of Public Safety ordered the arrest of Marie and her mother as royalist sympathizers. For three months, they were imprisoned in the Laforce Prison, Paris. Then, Marie was found guilty of being an enemy of the revolution and sentenced to death. She had apparently just been prepared for execution, when she received an eleventh-hour reprieve, organized by Collot d’Herbois, a member of the Committee of Public Safety and an associate of her mentor, Pierre Curtius.

Since the revolution, Curtius had wisely trod a conciliatory path with the new regime, courting its leaders as he had once courted the fallen royal family. This attitude helped keep him alive. He must have cautioned the newly released Marie to do the same. She needed to show her loyalty to the revolution to preserve herself. So, like Curtius, she put her art at its disposal. Working with her mentor, she began to make death masks of the enemies of the revolution executed by the guillotine.

Marie and Curtius either ‘rented’ the heads from the executioner or else had them delivered by the authorities. Either way, it must have been profoundly unpleasant work for Marie. Firstly, she was dealing with severed heads, which aside from anything else were a constant reminder of her own near fate. But this apart, she knew many of the people she was forced to cast. They had been her employers; maybe even people she liked. Amongst them were Louis XVI, Marie Antoinette and later, the disgraced revolutionary Robespierre.

However, it wasn’t just the victims of the guillotine Marie was casting. She and Curtius were also producing wax portraits of many prominent revolutionary leaders. One of the most noteworthy for Marie was the death mask of the radical journalist Jean-Paul Marat. An opponent, Charlotte Corday, stabbed Marat while taking a bath for a skin complaint. Marie was immediately called to the scene of the crime.

Madame Tussaud later recorded the incident in her memoirs: “Gens d’armes came for me to go to the house of Marat, just after he had been killed by Charlotte Corday, for the purpose of taking a cast of his face, ” she recalled. “He was still warm, and his bleeding body and the cadaverous aspect of his almost diabolical features presented a picture replete with horror, and I performed my task under the most painful sensations.”

In 1794, Curtius died, leaving Marie his entire collection of waxworks and his two wax museums. The following year, she married. Her new husband was a civil engineer, Francois Tussard. The couple had three children: a young daughter who died in infancy and surviving sons, Joseph and Francois. The marriage, however, was not a success and in 1802, Marie Tussaud took her four-year-old son Joseph on what was to be a brief tour of London. It was a tour that was to last 33 years.

A New Life in Britain

Madame Tussaud first showed her waxworks at the Lyceum Theatre in London. The show was not a tremendous financial success. However, whether she wanted to remain in Britain or not, Madame Tussaud soon found she had little choice. War had broken out between Britain and Napoleonic France, making it impossible for the now 42-year-old artist and her small son to return home. Alone, with only a poor command of the English language, Madame Tussaud had to survive somehow.

Many of the figures in Madame Tussauds’ collection were victims of the Guillotine. Tussaud quickly realized the tragedy of the French revolution had captured the imagination of the British middle Class and that they would pay- and pay well- to see the actual features of such tragic figures as Louise XVI and his Queen. So she took her characters on tour, visiting cities and small provincial towns as a way of keeping herself and her little son. Her reputation as an artist was significantly enhanced when she received a prestigious commission from a member of the British royal family: Princess Frederica Charlotte of Prussia, the Duchess of York.

This nomadic life continued for the next twenty tears. By the time it was possible to return to France in 1822, Madame Tussaud had no desire to do so. She now had a lucrative business in Britain, which was joined by her long-lost son Francois, as soon as they reunited. As for her husband, the estrangement of two decades was insurmountable. The couple never saw each other again.

In 1835, after 33 years of touring, Madame Tussauds and her waxworks finally put down permanent roots. The exhibitions’ first permanent home was on London’s’ Baker Street, where Madame Tussaud set up her figures from revolutionary France, plus new additions such as Sir Walter Scott and Horatio Nelson, in tableaux’s of historical events. The exhibition was a major success. It was first branded ‘The Chamber of Horrors” by Punch in 1845, because of the terrible events portrayed by the waxworks.

On April 16, 1850, Marie Tussaud died peacefully in her sleep. She had survived revolutions and wars and made a name for herself as an artist and a canny businesswoman, as well as a survivor. She had also created a legacy for her family. Her son, Francois, continued as its chief artist, to be followed by his son and grandson. It is a legacy, which, although no longer directly in the Tussaud familys’ hands, survives to this day.