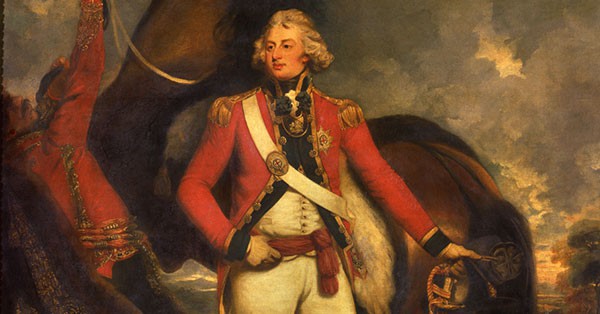 The Duke may have earned respect as a military reformer. But he also had a reputation for irresponsibility. He and his elder brother, the future Prince Regent and George IV were close friends. And like George, the Duke had a reputation for extravagance and was perpetually in debt through gambling.

That close relationship with his brother could have ended his life prematurely. On May 26, 1789, the Duke fought a duel on Wimbledon Common with Colonel Charles Lennox, the future Duke of Richmond. The colonel had been appointed to the Coldstream guards, against the Duke’s wishes as Lennox was opposed to his brother. So when York made disparaging remarks about Lennox’s family, the colonel challenged his superior officer to a duel.

The Duke may have been an incompetent commander. But he was no coward. He avoided using his rank to avoid the challenge and met Lennox at the appointed place. Lennox fired first and the Duke received the shot, without flinching.

The short grazed his hair. When it came to the duke’s turn to fire, he simply shot into the air declaring he bore Lennox no animosity. Honor was satisfied and the colonel quietly switched regiments.

But in 1809, the Duke was forced to resign his commission because of a scandal emanating from his personal life.

Unhappily married to his cousin Princess Frederica Charlotte of Prussia, the Duke had had a mistress, a Mrs. Mary Anne Clarke. The Duke and Mrs. Clarke lived together for two years. The Duke tired of the relationship – but promised his ex-mistress an annuity so her daughters could be established in respectable lives. However, due to his excessive lifestyle, he did not keep up with the payments. The disgruntled Mrs. Clarke was forced to downgrade and move to Hampstead and there she came to the attention of Colonel Gwyllym Wardle.

Mrs. Clarke told Wardle him that the duke had been selling commissions. The person desiring promotion would approach Mrs. Clarke who would then ‘recommend’ them to the Duke. Generally, Mrs. Clarke claimed, the Duke would agree as he went without her attentions if he did not comply. This was a massive embarrassment, not least because the Duke’s reforms were attempting to eradicate this very practice. But the possibility that the Duke himself could have been using his mistress as an intermediary to receive bribes was a grave matter.

Wardle accused the Duke of corruption and a House of Commons inquiry was set up. The Duke was acquitted of receiving bribes by 278 to 196. But feeling that the votes against him were enough to constitute a vote of no confidence, he resigned from his command. But in 1811 when it was revealed that Mrs. Clarke had been paid by Wardle to provide her testimony. Wardle had promised her £5000 in cash and all her debts cleared and a new house in Chelsea. Honor restored, the Duke returned to his post.

He died of dropsy and heart disease in 1827, honored for his military work by parliament and in 1834 commemorated by the Duke of York column, just off Waterloo Place in London.