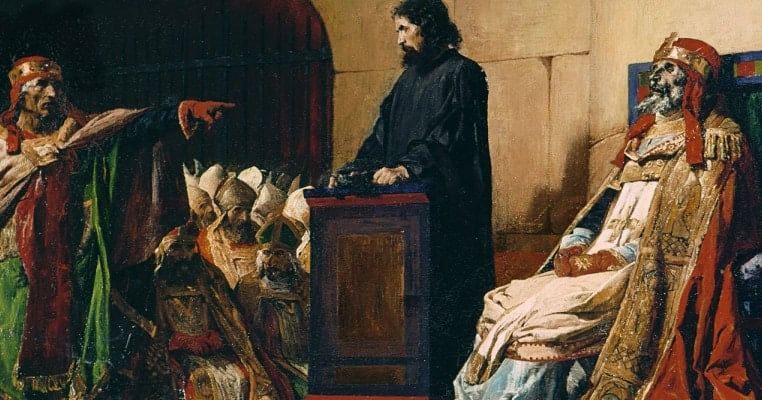 Pope Formosus was dead, but that would not stop the Spoletan Pope Stephen VI from giving him a piece of his mind. Stephen VI ordered the rotting corpse of Formosus exhumed, and had it hauled to the papal throne. There, in one of the papacy’s weirdest episodes, the remains were subjected to an ecclesiastical trial before the Roman clergy, that came to be known as the “Cadaver Synod”. With Formosus’ reeking corpse propped on the throne, Stephen VI conducted the prosecution, while a teenage deacon, hiding behind the dead pope, conducted the defense.

Stephen’s list of charges against Formosus was long, and included perjury; serving as bishop while actually a layman; transmigration of sees in violation of canon law; and of generally having been unworthy of the pontificate. The proceedings were just as ghoulishly farcical and macabre as one might imagine. The unhinged Stephen would scream the accusations against Formosus’ cadaver, then the deacon hiding behind the dead pope, imitating Formosus’ voice, would deny the charges.

To no one’s surprise, Formosus’s corpse, being a corpse, lost the case, and was found guilty. An ancient Roman penalty, damnatio memoriae, meaning “condemnation of the memory” and typically decreed by the Senate against those who brought dishonour upon the state, was applied. Stephen VI then had the papal vestments stripped from Formosus’ corpse, to be replaced with rags. Next, he ordered the amputation of three fingers from Formosus’ right hand, which he had used in consecrations. The he had the body dumped in a pauper’s grave.

However, even that failed to satisfy Stephen and sate his vindictiveness for long. Soon thereafter, still raging at the insult to the Spoleto family, he again had Formosus’ corpse dug up, then ordered it loaded down with stones, and tossed into the Tiber river. The man was clearly insane, and his bizarre behavior led to widespread rioting that finally ended with his ouster. The rioters got a hold of Stephen VI, and he was stripped of his papal vestments, imprisoned, and strangled to death in his cell.

Pope Stephen VI and the Cadaver Synod might have been the era’s weirdest pope and papal episode, but neither would prove to be the worst in a period that is often described as the nadir of the papacy. In the following few decades, before serious reform efforts were finally made, the woeful list of Stephen VI’s successors would include Pope Sergius III, who murdered two predecessors, and fathered an illegitimate child (who would go on to become pope). Another pope, John XII, became a serial rapist and murderer, and transformed the papal palace into a de facto brothel. Yet another, Benedict IX, sold the papacy in order to fund his retirement.

Ripley’s Believe it or Not – Cadaver Synod: The Trial of Pope Formosus’ Corpse