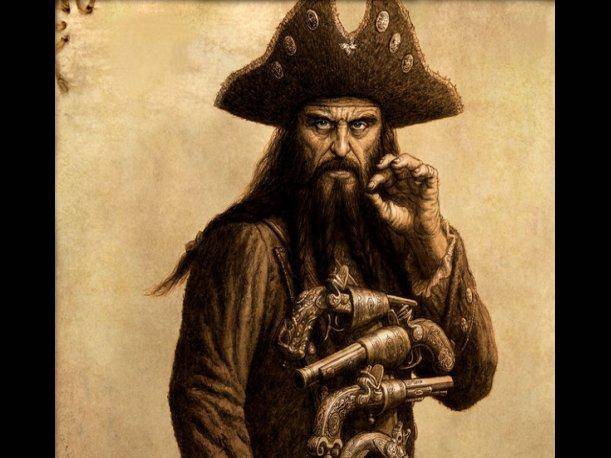 Klaus Störtebeker is credited as being Germany’s most famous pirate, despite this there are very few facts that are known about his life. His name, Störtebeker, is his surname and his nickname, as it has the meaning “empty the mug with one gulp” in Low Saxon. Apparently the name was given to him because of his ability to empty a four-litre mug of beer in a single gulp. He was born in Wismar sometime around 1360 but he did not really start making a name for himself until 1398. He was part of the Victual Brothers and it was during their expulsion from the Baltic island of Gotland that Störtebeker first enters into public record.

In the years following the expulsion, Störtebeker and other pirates captured a number of Hanseatic ships with little care to where they came from. Störtebeker was known to have a strong hold in Marienhafe, East Frisia starting in 1396. There is a tower at the Evangelical Lutheran Marienkirche in Marienhafe that still bears the name Störtebeker. With those being the only known facts about Störtebeker it is strange to think he has become so famous throughout Germany but much of that is attributed to the legend that surrounds him.

Legend says that in 1401 a Hamburgian fleet under the command of Simon of Utrecht crossed paths with Störtebeker’s force somewhere near Heligoland. Some stories suggest that Störtebeker’s ship had been sabotaged by a traitor who had poured molten lead into the links of the chain that controlled the rudder of the ship. Whatever was the case with the ship Störtebeker and his entire crew were captured. They were taken to Hamburg where they were put on trial for charges of piracy. Störtebeker and the 73 men in his crew were all sentenced to death by beheading. This is where the real legend of Störtebeker begins.

It is said that Störtebeker asked the mayor of Hamburg to spare as many of his men as he could walk by after being beheaded. The mayor was said to agree to the request and Störtebeker was beheaded. After his beheading, he was able to walk past 11 men before the executioner tripped him. The mayor still went ahead with the executions of the 11 men along with the rest of the crew. In a small bit of karma when the executioner was asked if he was tired after performing 73 executions. He replied that he could easily kill the entire Senate, he was sentenced to death and executed. The legend also says that after his execution, his ship was dismantled and it was found that the core of his masts were gold, silver and copper. The gold core was used to create the tip of St. Catherine’s church in Hamburg.