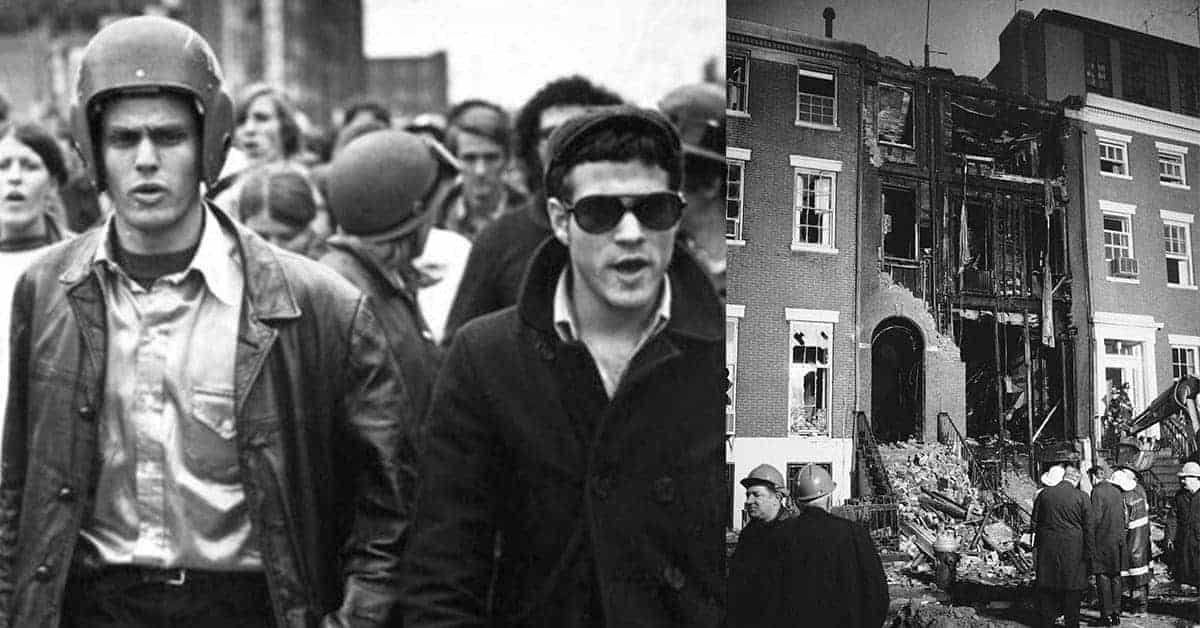 The Weather Underground’s first public protest, known as the Days of Rage, took place on October 8, 1969, was a riot timed to coincide with the Chicago Seven trial, the trial of seven leftist revolutionaries charged with conspiracy and inciting to riot after an anti-Vietnam War protest in 1968. Two days prior to the Days of Rage, on October 6, the Weather Underground planted a bomb at the statue commemorating the police casualties incurred in the 1886 Haymarket Riot in Chicago. The memorial statue was rebuilt and bombed twice more by the extremists before being relocated to Chicago Police Headquarters.

In 1970, the radicals issued a “Declaration of a State of War” against the United States Government. The Weather Underground conducted a campaign of bombings through the mid-1970s and took part in breaking Dr. Timothy Leary out of prison. The bombing campaign targeted mostly government buildings, as well as several banks. The bombings were preceded by evacuation warnings and notices identifying what specifically the bombings intended to protest. No people were killed in any of the bombings except for three members of the group who were killed in when a bomb accidentally detonated in a Greenwich Village townhouse on March 6, 1970.

A few notable attacks perpetrated by the Weather Underground include the attack on February 21, 1970, when three Molotov cocktails exploded in front of the home of the New York Supreme Court Justice John Murtagh who was presiding over the hearings of the Panther 21, members of the Black Panther Party who had plotted to bomb New York landmarks and department stores. “Free the Panter 2” and “Viet Cong have won” were written on the sidewalk. The very same night, Molotov cocktails had also been thrown at the Colombia University’s International Law Library as well as the Charles Street Police Station.

On March 1, 1971, the Weather Underground bombed the United States Capitol. They released a statement saying that the bombing was “in protest of the U.S. invasion of Laos.”

On May 19, 1972, the socialist terrorist organization bombed the Pentagon “in retaliation for the U.S. bombing raid in Hanoi.”

On October 20, 1981, some members of the Weather Underground who had joined splinter groups, helped the Black Liberation Army rob a Brinks armored truck containing $1.6 million. The robbery resulted in the deaths of three people including Waverly Brown, the first black police officer on the Nyack, NY police force.

“We’ve known that our job is to lead white kids into armed revolution. We never intended to spend the next five to twenty-five years of our lives in jail. Ever since SDS became revolutionary, we’ve been trying to show how it is possible to overcome frustration and impotence that comes from trying to reform this system. Kids know the lines are drawn: revolution is touching all of our lives. Tens of thousands have learned that protest and marches don’t do it. Revolutionary violence is the only way.”
â€” Bernardine Dohrn

The New York Times – â€˜Days of Rage,’ by Bryan Burrough

The New York Times – I Was Part of the Weather Underground. Violence Is Not the Answer.