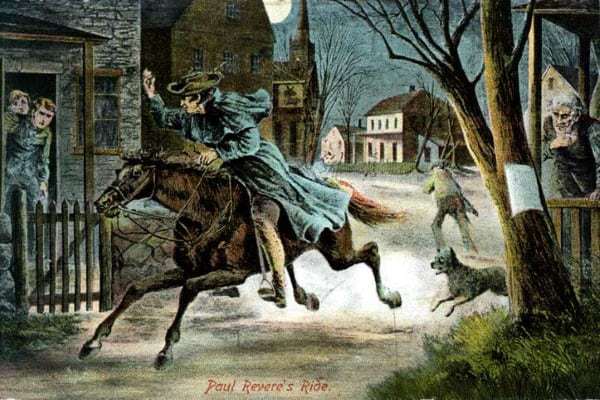 The End of the Road for Revere

Surprisingly, the fact that Revere wasn’t alone in his midnight ride isn’t the only misconception that is often told about that particular piece of history, but it is the most important. The other thing that most people don’t know is that Revere was actually captured outside of Lexington during the ride, preventing him from completing the entire route that had been planned for him.

Instead, Dr. Samuel Prescott finished the ride, while Revere was in the hands of the British. William Dawes, who had met with Revere outside of Lexington, lost his horse and was forced to walk back to Boston instead of finishing the ride with Prescott. Dr. Prescott continued on and warned more and more people of the impending attack, finishing his ride in Concord early on the morning on April 19, 1775.

Revere was eventually released after being threatened, but his horse was confiscated, officially ending his ‘ride’. The American Revolution would soon kick off, and, despite being just one of many patriots who would have a role in the start of the fighting, Revere is to this day one of the best known Americans of that time period.

One of the reasons for this, if we don’t want to place the blame entirely on a poem, is that Revere left records of his journey from Boston to Lexington, whereas we don’t have much in written form from the other riders.

Even with the misconceptions, the system that Paul Revere was part of was very important for the Americans at the start of the war. He and the other riders allowed the patriots to gather at least 75 men who would meet the British in Lexington (who had a force of around 700) on April 19, 1775. While the colonies wouldn’t declare independence for another year or so, it was at Lexington and Concord that their stand began, and Paul Revere had his role to play.

Despite the inconsistencies about what happened that night versus what is taught in schools, Revere is highly regarded for his actions, and is immortalized in statues and paintings in historical sites throughout Boston.