Okay, Get Ready for Dr. Seuss' Rarely Seen and Scandalous Book of Nudes 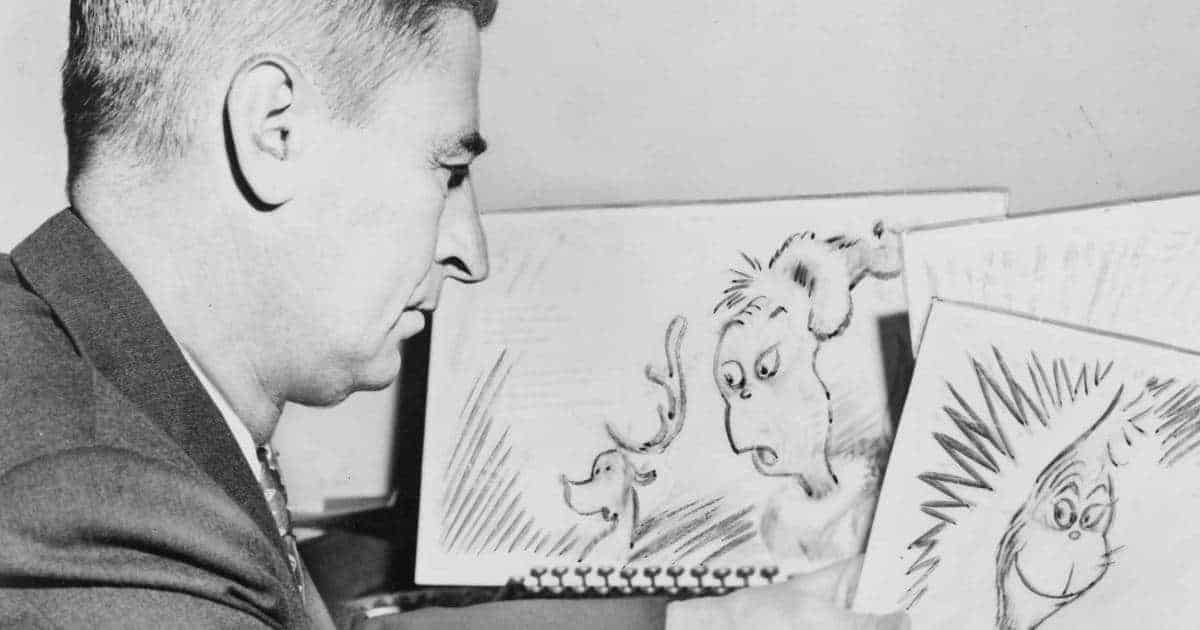 Okay, Get Ready for Dr. Seuss’ Rarely Seen and Scandalous Book of Nudes

In the original story of Lady Godiva, an English noblewoman accepted a bet with her husband to lower the city’s taxes if she would ride naked through the street. Covered only by her hair, Lady Godiva rode a horse through the town as everyone politely closed their windows. Everyone, that is, except for a tailor named Tom, who couldn’t help but sneak a peak. Tom was quickly struck blind by God, and the phrase “peeping Tom” was invented. But Seuss’ version of the story has a few important differences.

First, there are actually seven Lady Godivas, who are all sisters. And the ladies are all engaged to a set of seven brothers with the last name Peeping. Unlike in the original story, the sisters aren’t naked because they’re trying to win a bet. They just like being naked. As Seuss explained, “they were simply themselves and chose not to disguise it.” And unlike the original Godiva, they grow to hate horses after their father is killed on one. Hoping to prevent more deaths, the sisters put off their engagement to the Peepings to warn the rest of the country about the danger of horse riding.

The sisters set out to learn a set of “horse truths” that they can share with the rest of the English. Each of the Godiva sisters has their own story within the book as they learn their own personal horse truth. For instance, the book starts with Teenie Godiva. And in spite of her name, she’s the biggest of the sisters. After finding out she’s too fat to ride a horse, she goes to the barn and finds a horse that their uncle originally gave them as a gift. After looking in the horse’s mouth, it bites her nose off. Teenie returns to her sisters with the horse truth, “Never look a gift horse in the mouth.”

Up next is the smartest Godiva, Dorcas, who wants to figure out a way to travel by horse without riding it. Her experiment fails after she gets the cart/horse combination in the wrong order and crashes. Her horse truth? “Don’t put the cart before the horse.” Then there’s Arabella, who works her horse until it becomes an alcoholic and refuses to ever drink water again. As she learns, you can lead a horse to water but you can’t make him drink.

The remaining sisters have their own horse-based misadventures, of course. Mitzi learns not to change a horse in midstream after her horse-powered boat sinks. Lulu learns horseshoes are lucky after getting kicked into a pile of hay. Gussie finds a horse of a different color after she escapes from the castle with the help of some paint. And finally, Hedwig finds out it’s pointless to lock the barn door after her horse has left. Of course, while all the Godivas are nudists, there’s nothing X-rated in the book. But maybe there should have been because the book was about to be the worst failure of Seuss’ career.

The original print run of the Seven Lady Godivas was for 10,000 copies. We aren’t sure exactly how many copies actually sold. But estimates are that it was between 2,500 and maybe even just 50. The rest of the copies were rounded up and sold in a chain of cigar stores for twenty-five cents. There are a few possibilities for why the book didn’t sell well. First, it was released in the middle of the Great Depression. And at two dollars, it might have been too expensive for most people. Or hungry people might have just not been in the mood for a funny book about naked girls and their horses.

The nudity itself probably didn’t help. A lot of critics rejected the book for being offensive. But Seuss didn’t think the nudity was the problem. He thought he was just terrible at drawing naked women. “It was all full of naked women,” he said, “and I can’t draw convincing naked women. I put their knees in the wrong places.” Whatever the reason, the failure had a huge impact on the future path of Seuss’ career. While today we think of Seuss as one of the greatest children’s authors in history, there was a time when he could easily have gone in another direction.

A lot of the reason he started publishing his books under the name “Dr. Seuss” was that he was saving his real name for a time when he could write serious, adult novels. In fact, it seems like he didn’t even really like children. According to his wife, he was actually slightly afraid of them. He was uncomfortable being around children because he found it hard to predict what they might do. It wasn’t until the failure of The Seven Lady Godivas, his first book for adults, that he decided he should stick to writing for kids.

After the cold reception for the book from grown-ups, he decided that kids were “more appreciative.” But even then, there was no guarantee that Dr. Suess would be the giant he is today. After the book came out in 1939, Seuss went back to working in advertising. Then, after the US entered WWII, he started working for the Government. He spent the next few years producing propaganda cartoons to support the war effort. It wasn’t until The Cat in The Hat was published in 1957 that Seuss’ career as an author really took off.

And it’s strange to think that The Seven Lady Godivas, “a book that nobody bought,” as Seuss described it, helped make him into the artist that he eventually became. But if Dr. Seuss had lived to this day, he might have felt a little better about the book. Today, the original copies that sold in a cigar store for twenty-five cents are collector’s items. And a copy in good condition can sell for hundreds of dollars. It’s not a bad ending for Dr. Seuss’ scandalous book of nudes.