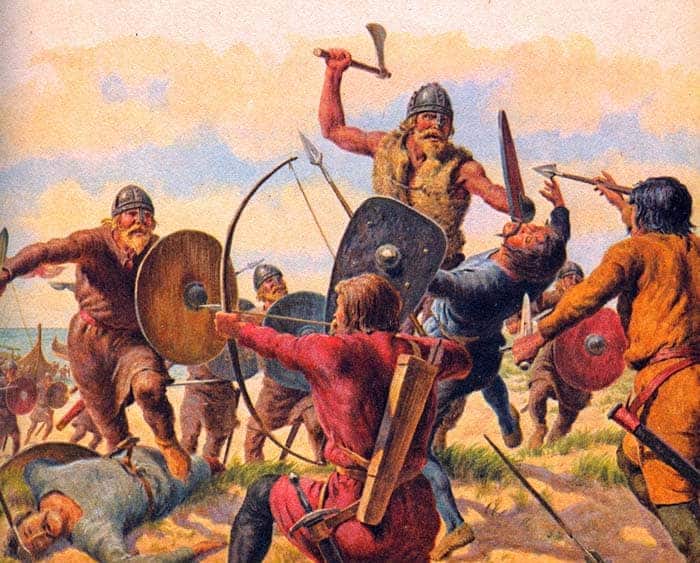 The prophecy of RagnarÃ¶k (judgment of the powers) held vital importance in Viking society. In other societies around the world, all had their own prophecies of the end of the world. Christianity has Judgment Day, as well as the Mayans with the calendar ending on December 21, 2012, prophesying a rebirth of mankind. Prophecies affect all religions, for they create a blueprint to daily life in every culture. One must behave and act a certain way in order to reach each religious version of heaven. In Christianity, one must live a life without sin in order to be accepted into heaven.

In Norse culture, in order to reach Valhalla, a man must die in battle. The Valkyrie are warrior maidens who go around the battlefield and choose men to die so they can be sent to Valhalla to fight in RagnarÃ¶k. Prophecy is something all humans are afraid of. Most prophecies are bad in nature and lead to destruction or death. Yet people are fascinated by prophecy because they tell what is supposed to happen in the future, for they are hard to change. Most religions believe fate and prophecies go hand in hand, and fate cannot be changed. Other religions believe fate can be changed and prophecies can be broken. In Scandinavian culture, prophecies coincide with divination. Divination is seen as a paganism ritual and mostly associated with witchcraft. Vikings would seek divination to consult prophecies and matters of the future. In mythology, the Fates are called the Narns. The Narns are the Norse form of the Greek Fates, where one spins the cloth of life, the second measures the lifespan, and the last cuts the thread to seal the fate of that person.

The Vikings took their religion as a serious way of life. Their religion was interwoven into their lives which they worked to please the gods daily. They participated in religious sacrifices to earn their gods’ pleasure. Archeologists have found red altars also known as hÃ¶rgr, most likely from blood staining the sacrificial area. From Adam of Bremen, the Scandinavian society would sacrifice nine people from each social class. This would happen only in nine-year intervals, for the number nine held significance such as the number seven to Christians. The sacrifices would be male only, and most slaves were killed. Scandinavians would also sacrifice horses, which probably helped the warrior men reach Valhalla or so they had a horse to ride during the battle in RagnarÃ¶k.

The Northmen had areas of worship, mostly a sacred grove or a scared object placed in a specific area. The Eddic poems have referenced to the building of places of worship such as the high-timbered altar and temple of the VÃ¶luspÃ¡. Usually, pagan temples have idols in earlier Scandinavian religion and were placed in groups of three. In the Prose Edda, the groups of three are shown in the traveling trio of Thor, Odin, and Loki. Vikings did not seem to have a separate class of religious leaders like priests in Christianity. The term goÃ°i implies a religious function for leaders of the Icelandic society before the conversion to Christianity. The SÃ¡mi peoples of northern Scandinavia retained open-air priestless paganism worship well after the conversion since they were far from such Christian influences. Each day of the week would also be dedicated to a god, such as Thursday (Thor’s Day) and Wednesday (Wodin’s Day). The Vikings would also pray to Njord to protect them during their seafaring trips, and have feasts in honor of each god daily.

The Scandinavian culture had a variety of burial rituals for their dead. These rituals were believed to help the dead reach Valhalla. The dead could be cremated, thrown in bogs, buried in the water, or under mounds. Burial rituals differed from area and class. In certain areas, there were mass burials under mounds of dirt and rock depending on the size of the villages. The gravestones, if any, were marked with symbols of moons or stars, circles, and other alignments forming variant patterns. Bodies were crammed into “coffin boxes” or a form of detachable wagon that was mostly used for women. The typical variations of these boxes were found in Norway. The chamber graves that were more often found in Sweden were reserved for the elite class and the wealthy. These graves were underground rooms built of wood, with thatched roofs and filled with goods. These rooms would have animals, food, drink, and treasures so the dead could take these materials with them to Valhalla. The dead would be laid out on their backs or side, and sometimes even in luxurious chairs. Laying out the dead in chairs was more commonly found in Sweden and Russia.

The most famous of burials are those of ships and boats that have become commonly known for the Viking Age. These boats or ships could extend from a one-man dingy to a massive seafaring vessel. One of the most famous of burial ships is the Oseberg ship found in Norway reveals how the elite was ceremoniously buried after death. Two women were found in the ship, as well as many possessions like carts, wooden chests, and a bucket. When an elite member was buried, one must be sacrificed with the dead. Usually, the one chosen to be sacrificed is a woman. In terms of a King, his mistress or love slave would volunteer to be sacrificed with her master. She would then have sexual intercourse with several members of the village, where the men would pronounce they were doing it for the good of the King. The volunteer would be hoisted over the crowd and she would speak before them before she would be buried alive or burnt to death. During the funeral process, a make-shift grave must be put in place. Ten days of activities follow the temporary grave-making. These activities and ten days of celebration all lead up to the deceased “last day” when the cremation begins. The body, the sacrificial volunteer and belonging are all loaded into the ship and then burned to the ground.

Vikings were fascinated by the idea of death; the idea of the Barrow expands on that concept. Barrows were the hill where those who died were buried, and the mythology of the meaning of a burrow goes along with it. These Barrows, or tombs, were believed to be hollow passageways that led from MidgarÃ° to Valhalla, and also to Hel. With these passages, the dead could return to their Barrows at night after having done what the Valkyrie asked of them or battling in Valhalla.

People today are still fascinated by the stories of Norse mythology. Tolkien took many ideas from the Poetic Edda and Prose Edda, using them in his Lord of the Rings works. Marvel Comics also used the mythology in their comic book Thor, who becomes a member of the Avengers and his arch-nemesis is the god Loki. The myths of fairies, elves, giants, and monsters all come from the Norse, giving us the fairy tales we know today. The myths of the Norse gods and creatures will forever play an important role in the lives of people today.