Con Man: The Fraud Who Claimed To Have a Cure For Cancer 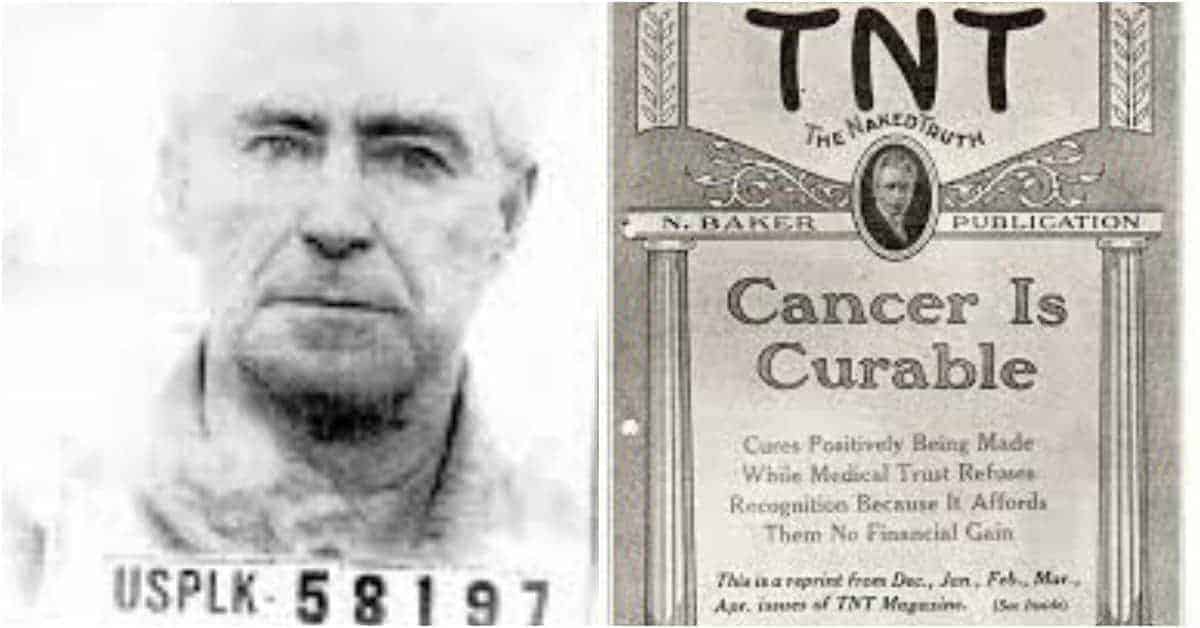 Con Man: The Fraud Who Claimed To Have a Cure For Cancer

Norman Baker was an entrepreneur, an inventor, and later a radio broadcaster. He was a flamboyant character who always dressed in a white suit with a lavender tie. He excelled in the art of self-promotion through his radio show and by his self-financed biography, “Doctor, Dynamiters, and Gunmen.” Its author, Alvin Winston, wrote that Norman Baker’s life story was “the greatest one-man battle ever fought,” and that his biography was the “most important book ever written.” This is the story of Norman Baker, the man who claimed to have a cure for cancer.

Norman Baker was born on November 27, 1882, in Muscatine, Iowa. Baker was the youngest of ten children. His father, John Baker owned the Baker Manufacturing Company in Muscatine and also reportedly had 126 patents to his name. Norman’s mother Frances worked as a writer before she got married. Norman left school at the age of sixteen and began working as a machinist. He worked as a die and toolmaker, traveling from town to town in search of work.

His path took a different direction however after he watched a “mental suggestion” performance by “Professor Flint.” Baker was so inspired that he set out to produce his own version of the show. After an initially slow start, Baker’s show took off and became a hit on the vaudeville circuit. Baker’s show featured a mind reader known as Madame Pearl Tangley. When the original star of the show quit, she was replaced by Theresa Pinder, and a year later she became Norman’s wife.

The show successfully ran for four years before Baker’s career took another divergent path. While working on a new invention in his brother’s machine shop, Norman invented a calliope which used air rather than steam to operate. He called it the Air Calliaphone and sold it for $500. He made two more and sold them. In 1915 he decided to quit the vaudeville circuit to begin full-time manufacturing of his new invention.

He divorced his wife Theresa the same year. His manufacturing business became very successful and at its height was reported to be making $200,000 a year. In 1920 Baker set up an art correspondence school known as the Tangley School. Despite confessing to having no artistic ability himself, Baker managed to earn $75,000 teaching others. Again in 1925, Baker changed his career once more. He met with the Muscatine Chamber of Commerce and offered to build a radio station to “popularise Muscatine throughout the world.” Baker promised to use his radio show to promote Muscatine as an investment opportunity for businesses and his request was granted.

Baker chose the call letters KTNT for his new radio station, which stood for “Know The Naked Truth.” His show aired for the first time on Thanksgiving Day, 1925. Baker knew of the distrust felt toward urban big businesses and cast himself in the role as hero for Muscatine’s small business owners as well as its rural community of farmers and laborers. Baker regularly used his radio platform to take a swipe at a number of organizations and individuals who he disagreed with, which included Wall Street and the American Medical Association and the Aluminum Trust.

Radio allowed Baker to make himself better known and also gave him the opportunity to sell his products to an even wider market. In 1928 Baker’s show began broadcasting at 10,000 watts which meant that his show could reach over one million homes. Baker’s KTNT show became so popular that thousands of people would come to the station just to hear his broadcasts. It seemed as if Baker could do no wrong. His radio career was thriving and he had become very wealthy from his many successful businesses.

However, as his popularity and his profile soared, Baker began to alienate himself from his listenership and followers by engaging in spiteful attempted character assassinations of his enemies, accusing them on-air of adultery and drunkenness. It had the opposite effect and did more damage to his own reputation than to the others he tried to smear. It was his next venture however which led to his downfall. In 1929, Baker heard of Dr. Charles Ozias who had purportedly discovered a cure for cancer. Norman called for five volunteers with cancer to be sent to Dr. Ozias for treatment at his own expense.

Baker’s new tabloid magazine, called The Naked Truth (TNT), would publish the study’s findings in the December issue of 1929. Despite having never received any medical training in his life, Norman was convinced that using aluminum-based products such as utensils caused cancer and that cancer could not be cured by “operation, radium, or x-ray.” He dismissively referred to surgeons as “cutters.” Baker attained the “cure” from Dr. Ozias in January 1930. He claimed that the formula could be administered by injection and would cure cancer.

In November 1929, the first test patient died. In spite of this, Baker’s TNT magazine published in December, with him and two of his associates adorning the front page under the headline “Cancer is Cured.” Later in December, a second patient died. A third and fourth died in January and February. Outrageously and shamefully Baker reprinted the December issue of TNT in March 1930 which described the miraculous recovery of all five volunteers. The fifth patient died a couple of months later in May. Baker again reprinted the December issue.

Baker’s formula turned out to be a useless concoction of alcohol, glycerine, carbolic acid mixed with tea brewed from watermelon seed, brown corn silk, and clover leaves. He opened the Baker Institute for the treatment of cancer sufferers in Muscatine. He used his KTNT radio show to promote his new hospital and in March, despite already claiming to have a cure for cancer, he decided to employ a charlatan with his own alleged cure for cancer, Harry Hoxsey.

Desperate and vulnerable cancer sufferers who believed in Baker’s and Hoxsey’s cures flocked to the treatment center. The Baker Institute became financially very successful and had earnings of over $444,000 in 1930 alone. However, Baker was now on the radar of the American Medical Association (AMA), who sought to expose him for the fraud he was. The editor of the Journal of the Medical Association (JAMA) wrote in the April edition of the journal: “The viciousness of Mr. Baker’s broadcasting lies not in what he says about the American Medical Association but in the fact that he induces sufferers from cancer who might have some chance for their lives, if seen early and properly treated, to resort to his nostrum.”

Baker also claimed that the AMA had offered him $1 million dollars for his cancer cure so they could remove it as a treatment so that they could continue to use surgical means to remove tumors. The Des Moines Register reprinted the JAMA’s story and conducted their own investigation into Baker. Their investigation revealed that many patients of the Baker Institute had died and that Baker’s claims of having a cure for cancer were completely false.

Baker took legal action against the AMA for libel and defamation. He claimed that the AMA had sent three assassins to his KTNT station to silence him. In the gunfight, Hoxsey was alleged to have shot one of the men, before all three made their getaway. A police investigation into the matter was later dropped due to lack of evidence. In May, Baker decided to hold an outdoor public demonstration of his cure to quell any doubts about its validity. An estimated crowd of forty to fifty thousand came to see Baker’s exhibition. Supposed former patients of the Baker Institute lined up one after another, telling of how Baker’s treatment had cured them.

Baker drank a large quantity of the formula to prove that it was harmless. This was followed by a surgery performed on a man named Mandus Johnson, who allegedly had a brain tumor. While Johnson was still conscious, the formula was applied, and afterward, Baker told the crowd, “Cancer is cured!” He once more launched into the AMA and his tirade continued daily on KTNT. Rumours abounded of the authenticity of Baker’s claims and cancer sufferers continued to seek treatment at the Baker Institute.

The JAMA continued their quest to expose Baker. They described the surgery performed on Mandus Johnson as a hoax, claiming that Johnson had a condition which caused inflammation of the outer part of his skull. They lobbied the Federal Radio Commission to take him off the air, and in May 1931 the FRC refused Baker’s application to renew his license. He lost his court case against the AMA. An arrest warrant was issued against him for practicing medicine without a license.

Baker left Muscatine and went to Mexico where he set up a new radio station as well as a small cancer treatment facility. After a few years in exile, Baker returned to Muscatine in 1937. He served one day for practicing medicine without a license. He ran for Governor of Iowa and later the Senate but failed miserably in both cases. Later, he moved to Arkansas and bought a Victorian hotel (modern-day Crescent Hotel, Arkansas) which was converted into yet another hospital for cancer patients. The Baker Hospital was very successful for the two years it was open. It reportedly made in the region of $500,000 a year.

However, time was running out for Baker. He was a marked man by federal authorities. Seven letters advertising his Baker Hospital sent in the mail was enough evidence to charge Baker with using the mail to defraud. In January 1940 he was found guilty. Baker later appealed the decision, but it was denied, and the court stated that Baker’s cancer cure claims were “pure hoax.” Baker continued to throw out accusations that he was the victim of a conspiracy against him.

He claimed that the jurors in his case had been bribed with whiskey and women. He served three years and four months at Leavenworth Federal Penitentiary. After his release, Baker tried unsuccessfully to reopen the Baker Institute in Muscatine in 1946. He moved to Florida and lived there until his death in 1958.

The question remains as to whether Baker was a charlatan and a fraud who preyed on vulnerable people or was he just simply deluded? A psychiatrist who evaluated him in prison believed that Baker was the latter. However, during Baker’s trial, Assistant U.S. Attorney Leon Catlett quoted Baker as saying that he would “reap one million dollars out of the suckers in the state.” Regardless of his motive, his cancer cure claims resulted in many deaths and robbed cancer sufferers of the opportunity of receiving potentially life-saving treatment by genuine medical professionals.