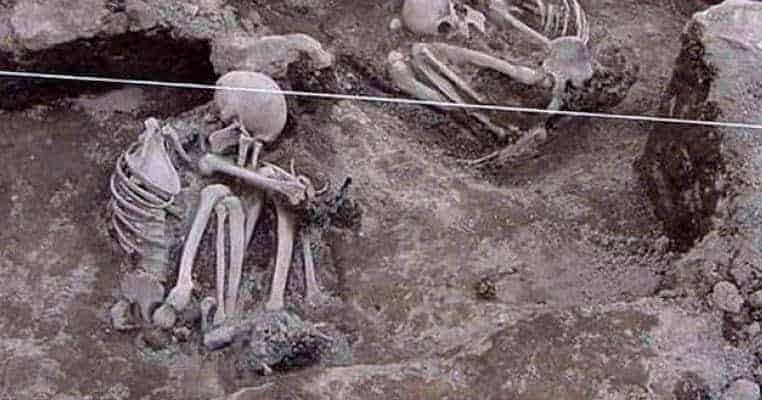 What killed millions of Aztecs? For over a century historians, anthropologists, archeologists, and other researchers have debated this question. It seems that everyone has their own idea as to how millions of indigenous people died when Europeans began arriving in the New World. But was it just the Europeans that caused the Aztec population to plummet over the course of 60 years? Was there something else afoot that contributed to the massive decline of the Aztec Empire? Is there more to this story than simply the tools of warfare used by the Spaniards? Researchers have recently uncovered what they believe to be the reason for the massive die off of Aztec people: pestilence.

The Spaniards began arriving in the New World during the 15th and 16th centuries. With support from the Spanish Crown and special permission from the Pope, conquistadors ravaged the land and its people in the name of spreading Christianity to the heathens. Being a successful conquistador could result in receiving a land grant from Spanish officials. These land grants would include large tracts of land, mining operations, as well as agricultural pursuits. Native inhabitants were forced to convert to Christianity and were taken as slaves. If they refused either, they were labeled as heretics, tortured, and in the worst instances, banished into the wilderness.

Arrival of the Spanish

The transatlantic voyage in the sixteenth century took about three months. The ships contained barrels of water, salted meat, and livestock. Sailors collected rainwater to replenish the drinking water. Rats found their way onto the ships while docked. It was not unusual for them to drown in the drinking water, contaminating it for those on board. Food was rationed and often was comprised of some sort of broth and a small portion of salted meat one time per day. If a ship got off course, the food was rationed more.

When the Spaniards arrived in the New World, they were already malnourished and sick from the transatlantic voyage. It must have been a great shock when Europeans arrived in the New World expecting loaves of bread and other wheat-based items only to find corn and never-before-seen animals. This drastic change in diet caused most Europeans to suffer from intestinal complaints as their bodies adapted to new foods. They vomited, had diarrhea, and dysentery, which is classified as runny stool combined with blood. Upon arrival and for weeks after, Europeans were not in a good state of health.

Despite their overall ill health, the Spanish conquistadors were successful in their conquest of present-day Mexico and Guatemala. Officials created New Spain, which had several regional governments. Silver mines became very important for the Crown and soon, after the Conquest, silver flooded European markets. From the 16th century through the 18th century, Spain was the most powerful empire in Europe. It controlled almost the entire North and South American continents, its people, and its resources.

The Aztecs were formidable opponents. They fiercely defended their land and homes. From the 14th century onward, they conquered rival tribal areas and forced them to come under Aztec rule. Warfare was bloody and brutal. Well-trained warriors fought each other with various projectiles and hand-to-hand combat. When a tribal area fell, it came under the control of a growing Aztec Empire. For over 100 years before the Spaniards arrived, the Aztec Empire had grown in population, military strength, and land occupying all of present-day Mexico and Guatemala.

The conquistadors arrived with gun powder and protective armor. This gave them a tremendous advantage over the Aztecs. Despite being experts at warfare, the Aztecs were mortally wounded when Europeans used modern tools of warfare. The fighting between the two great armies was brutal. Visual depictions, folk lore, and written reports proclaim the devastating and brutal violence used throughout the Conquest. Despite high mortality, warfare did not kill 22 million Aztecs. So, what did?

Death of the Aztecs

Oral histories passed down from generation to generation identified a pestilence, or cocoliztli in the Aztec Nahuatl language. Victims of cocoliztli had symptoms that included a lightly colored rash on the chest, later called “rose spots,” abdominal pain accompanied by bleeding from the bowels, and vomiting. Those affected would suffer from a prolonged high fever that would create a coma-like state, muttering delirium, and the picking at real or imagined objects. This type of pestilence spread easily from one person to another. Death must have been a relief.

The cocoliztli is an enteric fever. Typhoid and Ebola are two of the types of fever that ravage populations with sustained high fevers for several weeks as well as gastrointestinal bleeding. If the body is already compromised in some way, a person does not have the ability to fight the fever and death occurs. For the Aztec, hundreds of people must have died on a daily basis. According to Franciscan friar Juan de Torquemada, who documented the history and culture of the Aztecs in colonial New Spain, described in his work, Indian Monarchy (Monarqui Indiana), that “big ditches were dug, and from morning to sunset the priests did nothing else but carry the dead bodies and throw them into the ditches.”

The ditches of mass-graves of the cocoliztli victims were daunting. Yet, the 1545 epidemic was not the first time that the Aztec population had been ravaged. In 1520, just as the Spaniards were completing their conquest, a smallpox epidemic claimed the lives of approximately 8 million people. A population of almost 22 million in the early 16th century dropped to about 14 million. As the population began to recover naturally, another epidemic struck. Between 1545 and 1550, 15 million people died from the first and most devastating cocoliztli outbreak. In 1576, yet another cocoliztli fever killed another 2 million indigenous people. Within 60 years, the indigenous population of colonial New Spain had collapsed.

For generations, many historians and researchers debated over what exactly killed so many indigenous people. The common thought was that diseases such as smallpox, mumps, measles, and influenza came to the New World with the arrival of Europeans. When the native populations contracted such maladies, they had no natural resistance and as such, died. While these diseases did cause epidemics in the New World, they were nothing like the impacts of the cocoliztli.

At the time of the millions of Aztec deaths, contemporaries knew the the cause of death was not from common European diseases. The symptoms presented did not match exactly with the mumps, measles, malaria, influenza, or smallpox. Matching documentation from the era as well as corroborating the stories passed down through the generations would take some work. Modern technology presented an opportunity to find an answer.

Turning to the cocoliztli cemeteries in Teposcolula-Yucundaa, Oaxaca, researches dug up 29 skeletal remains. Using teeth, researchers analyzed DNA evidence and were able to identify that all 29 remains had the same typhoid-like information. What the researchers found is a type of “salmonella enteric bacterium of the Paratyphi C variety.” Through this DNA analysis the research team, headed by Åshild Vågene of the University of Tuebingen in Germany, has concluded that one of the worlds largest epidemics was indeed a type of pestilence and not smallpox, measles, or flu.

Now that there seems to be an answer as to what caused the population collapse of indigenous people, the question is why did so many die? The answer may be found in the decades leading up to the arrival of the Spaniards and the drought cycle. All regions have a drought cycle. For several years there will be ample rainfall and agriculture will be very productive. Then for several years there will be lower than usual rainfall and crops will fail. For indigenous people in the New World, in the decades before the arrival of Europeans, they had suffered a horrible drought that stretched from modern-day Venezuela to Canada.

Humans are not able to function at full capacity if they suffer from a shortage of food. For the Aztec, failing crops meant that there was not nearly enough food to sustain the population. As a result, they were unable to fight off even the most common of diseases. When the Spaniards arrived, the Aztecs were already physically compromised. This contributed to the rapid decline in the indigenous population from disease.

The pestilence linked to the Cocoliztli Epidemic of 1576 was caused by a rare strain of paratyphoid fever. Researchers believe that this particular strain came from the Spaniards in the form of food and water. As with life in most of Europe, sanitation did not exist in the 16th century. People who lived off of the land knew not to empty buckets of human feces near their drinking water source.

As urbanization increased, as it did for the Aztecs, waste was thrown into the streets. Hand washing was not a common practice nor was daily bathing. Researchers believe that contaminated water by already-sick Aztecs and Europeans is what ultimately caused the collapse of the native population in New Spain.