An Irish Outlaw Down Under: The Life of Australia's Most Notorious Bandit 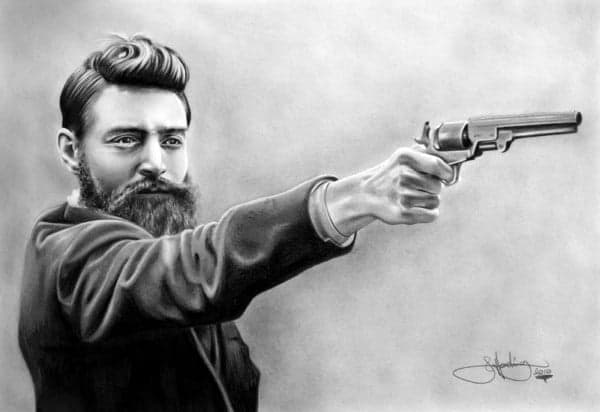 An Irish Outlaw Down Under: The Life of Australia’s Most Notorious Bandit

The Stringybark Creek Murders & Life on the Run

The Kelly Gang created a hideout near the King River, a location that was almost impenetrable. Aided by informers who told the gang about anyone who entered the area, Kelly was able to spot the four policemen who came after them. The gang ambushed two of the police and ordered them to surrender. While Constable McIntyre surrendered, Constable Lonigan tried to draw his gun but was shot dead by Ned. Sergeant Kennedy and Constable Scanlon appeared, but both were shot dead when they tried to fire their weapons.

The Government enacted the Felon’s Apprehension Act of 1878 within days of the murders and ordered the Kelly Gang to surrender or be declared outlaws. Under the Act, citizens were authorized to shoot anyone officially declared an outlaw. The Victorian Government offered £500 reward for the capture of any member of the gang, dead or alive. On December 9, 1878, the Kelly Gang stole £2,000 from the National Bank in Euroa. As a result, the reward was increased to £1,000 per head.

Far from being worried, the emboldened gang struck again with a daring raid on the town of Jerilderie on Saturday, February 8, 1879. They captured two policemen and took their uniforms. Then they waited two days for the Bank of New South Wales to open and entered dressed as cops. They escaped with over £2,100 in notes, and during the raid, Ned handed a bank teller a written statement that was around 8,000 words long! It became known as the Jerilderie Letter and offered an explanation for the gang’s conduct. By now, the reward for the capture of the gang had increased to £8,000 or £2,000 per head.

In June 1880, Byrne and Dan Kelly visited a man named Aaron Sherritt who was a close friend of the former. However, Sherritt betrayed the gang to the police and was shot dead in his doorway by Byrne. Rather than engaging with the outlaws, the four constables assigned to guard Sherritt hid in the bedroom and used the women inside as hostages.

The Last Stand at Glenrowan

Although Ned Kelly had already gained notoriety for his deeds, his attempts to shoot his way out of the small town of Glenrowan guaranteed his immortality. The police pursued the gang relentlessly until June 1880 when they surrounded the gang in Glenrowan. The gang took 60 people as hostages and shielded themselves in a hotel. After a failed attempt at derailing the train that carried the police, the gang decided to shoot their way to freedom.

Ned covered himself with metal armor which included breast and back plates and a head guard; the armor weighed over 90 pounds! The rest of the gang were also protected by metal plates. The gang had very little sleep and that, along with excess consumption of alcohol, ensured their judgment was poor because they believed they were invincible. The police surrounded the hotel in the early hours of the morning and started shooting. Ned was hit in the foot, arm, and hand while Byrne was shot in the thigh and bled to death.

The badly wounded Kelly escaped from the hotel when the police set fire to it, but his brother Dan and Hart were shot dead. Ned fired his revolver and tried to escape but was eventually brought down by multiple shots to the legs. He was arrested and charged with the murder of Lonigan at Stringybark Creek. Kelly was found guilty and hanged at Melbourne Gaol on November 11, 1880. His last words were supposedly ‘such is life.’

While he was an outlaw and criminal, Kelly’s attempts to end the poor treatment of Irish settlers opened the eyes of many which is part of the reason for his legend. The armor-clad Kelly shooting at police in his fight for justice and liberty captured the imagination and ensured his place in history.