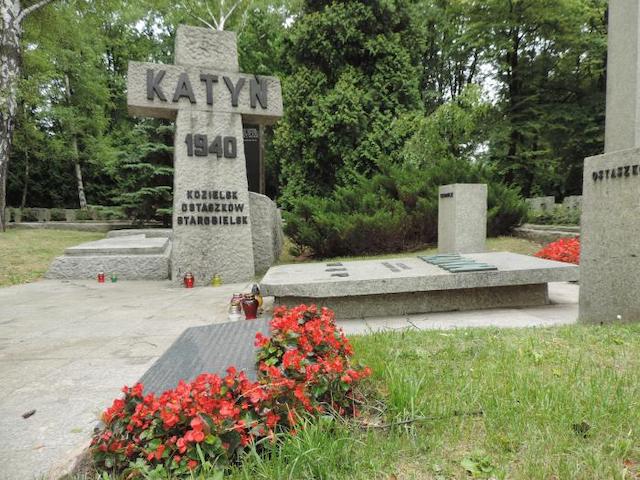 A German radio report announced in April 1943 the location of a mass grave in the Katyn Forest. The Germans had captured the city and surrounding area in July 1941. Immediately, Germany blamed the Soviet Union for the decaying men in the mass grave. The Soviet Union denied any knowledge of the atrocity and blamed Nazi Germany. After all, the world was just beginning to understand the horrors committed int eh name of racial purity by the Third Reich. It was feasible that they also had killed thousands of men int he Katyn Forest.

Poland had been a thorn in the side of the Russian and Prussian Empires. Since the 9th century the Kingdom of Poland and later the Polish-Lithuanian Commonwealth had invaded and conquered German and Russian territories expanding the Commonwealth into most of modern-day central Europe. Poland went through three partitions and by 1800, it no longer existed. After the First World War, Poland returned to the map but largely in name only. The Red Army and Nazi Germany fought over Poland throughout the second World War. But their fight continued as official hostilities ended. As issue was which of the two nations murdered over 4000 Polish officers and buried the in the forest. This is the story of the Katyn Massacre.

Allied forces paid little attention to the Polish Republic during the 1930s. This apathy allowed Adolph Hitler to send in his German troops to take over Poland uncontested on September 1, 1939. Britain and France demanded that Hitler immediately withdraw, he refused, and the Allies declared war on Germany. As part of Operation Barbarossa, Germany invaded the western section of theSoviet Union in June 1941 with the idea that Poles would be used as slave labor in the Nazi war effort to capture Moscow. Germany captured Smolensk on July 16, 1941 and remained in control of the region, roughly 220 miles west-southwest of Moscow, until libration in 1943.

Smolensk and its surrounding forested region was a strategic location and had been captured in earlier centuries by the Mongol Empire, the Polish-Lithuanian Commonwealth, and the First French Empire. When German soldiers invaded, they uncovered a horrific site. In the Katyn Forest outside of the city was a mass grave of over 4,000 men. The men were identified as Polish army officers. A German radio broadcast on April 11, 1943, announced the discovery in the now-held Soviet territory. Germany blamed the Soviet Union for the crime while the Soviet Union denied any knowledge or involvement and declared that the Nazis were responsible.

The Polish government had been operating in exile in London since the late 1930s. It demanded that Allied forces begin an official investigation into the Katyn Murders. Since the site of the mass grave was in Soviet-held territory and the Soviet Union was also an ally, the Allied forces refused. Instead, they oversaw the exhumations of the Polish officers by the International Red Cross. For five weeks, bodies were removed, examined, and identified using mementos, personal letters, and Soviet military orders that remained on most of the dead.

Newspapers in London and New York began to publish accounts of the mass grave found in the Katyn Forest and identities of the men. Polish people throughout the world were outraged. The Soviet Union refused to participate in the Red Cross investigation. Instead, they began their own investigation that quickly concluded that Polish army officers were murdered by the Third Reich. Despite Germany’s repeated denial, it was easy to believe the outcome of the Soviet-led investigation in light of the information surfacing about Nazi death and concentration camps.

For Polish people, something was amiss. Since 1939 over 15,000 Polish army officers had disappeared. Most were taken as political prisoners and shipped to labor camps to the interior of the Soviet Union. Many were permitted to write to loved ones in Poland while others were never heard from again. The Polish Ambassador in Moscow pressed Joseph Stalin for answers. Stalin replied that he would look into the matter. When the mater was not seriously investigated, Polish nationals and government officials in London wholeheartedly believed that he Soviet secret police had simply murdered the Polish officers.

No investigation would change the fact that so many Polish officers had disappeared. Family members wanted to know what had happened to their husbands, fathers, and sons. They knew that over 4,000 men were dead, but what happened to them between the time they were taken into Soviet custody in 1939 to the finding of the grave in 1943? The relatives of the bodies found in Katyn had letters that abruptly ended in April 1940 when letters were returned unopened with a stamp that read, “address unknown.”

When the Second World War ended, the United States Defense Department made the Res Cross report on the Katyn Murders in 1951. The report had identified many of the men, detailed the state in which they were found, and stated that the Soviet Foreign Minister had refused to assist in the investigation. The report went on to state that the Soviet Union viewed any investigation into the Katyn Murders by any other Allied force as an act of aggression. This threat became very serious as the Cold War intensified.

Polish-Americans were furious. They began making demands upon their elected representatives to support a resolution that would open a United Nations investigation. In 1953 it seemed as if they would get their wish. The United States House of Representatives voted to begin a congressional investigation into Katyn in 1951. To do so, the US had obtain all information related to the crime from Germany, the Soviets, and Allied governments. Then UN would hold hearings and begin an official investigation.

In 1953, for unknown reasons, the United States “decided to shelve the resolution.” Members of the Polish-American community were furious. The abrupt shelving of the resolution confirmed what many Poles believed from the first time that they had become aware of Katyn in that President Franklin Roosevelt had intimate knowledge of the murders. While there has never been proof that this was the case, it did not change the sentiment that many Poles had in regards to the overlooking of wartime atrocities in the hope of victory.

The Polish communities in the United States and Britain continued to push for an investigation into Katyn. Pressured by the international Polish community and by the 25th anniversary commemorating the end of the war, members of Britain’s Parliament called for another United Nations resolution into Katyn in 1971. Memorials honoring the dead required dates. The date of Katyn was still contested. Polish army officers murdered in 1940 by the Soviets or in 1941 by the Germans?

The Collapse of the USSR Provides Answers

On September 19, 1976, the Katyn Memorial Fund unveiled a memorial in Gunnersbury Cemetery in London. At the unveiling were members of Parliament and embassy representatives from the united Sates, Bolivia, and other ally nations. When the cover was removed from the memorial the date displayed was 1940 and not 1941. The Soviet Union was not happy and viewed the monument as an overt act of defiance.

The Kremlin continued to denounce the commemorations in Poland and elsewhere honoring the victims of Katyn. This action only contributed the the use of the Katyn Murders as a symbol and unifying force in the growing Solidarity movement. As time passed, more governments accepted the fact that the Soviets had indeed murdered the Polish army officers. Despite this, the Soviet Union continued to state that it has now involvement with the incident.

As the Solidarity movement grained strength inside Poland and in Polish communities throughout the world, it delivered a loud blow to the official Soviet stance on Katyn. On March 7, 1989, Poland directly accused the Soviet Union of murdering Polish army officers in the Katyn Forest and dumping the bodies in a mass grave to rot. This was the first time that any movement had openly accused the Soviets of the war crime. Soviet leader Mikhail Gorbachev did not confirm this accusation despite his recent declaration of glasnost or open policy.

On the eve of the 50th anniversary of the Katyn Murders the date on the memorial in the Warsaw military cemetery was changed under the cover of darkness from 1941 to 1940. A few days later, on April 13, 1990, the Soviet Union officially admitted to the crime at Katyn. Polish people around the world rejoiced in the news that they had believed and waited for for over 50 years. With the admittance from the Soviets an official account of what happened to the Polish army officers became public knowledge.

In the middle of the night in late-1939, the Soviet secret police burst into the homes of Polish army officers. The police forced the men to put on their military uniforms and leave their homes without saying goodbye to their wives or children. The men were placed on cattle trains and transported to prisons far into the interior of the Soviet Union where they were often beaten, tortured, and forced to work while in captivity. During evening hours, the prisoners wrote letters home. In April 1940, the men were once again forced onto cattle trains.

The trains arrived at a makeshift train station in the Katyn Forest near Smolensk. Soviet soldiers forced the men off of the train where they waited their fate. One by one each man was taken away from the heavily-guarded train station. Panic and perhaps relief set in when the men heard the single shot. Soon, the secret police would take another officer and march them away into the forest. This process continued until over 4,100 Polish officers lay dead in mass graves in the Katyn Forest. Bulldozers filled the pits with dirt and were placed onto the empty train cars. As the train left the station nature began to overtake the newly dug and filled graves.

Adam Zamoyski. The Polish Way: A Thousand-year History of the Poles and their Culture. New York: Hippocrene Books, 2003.