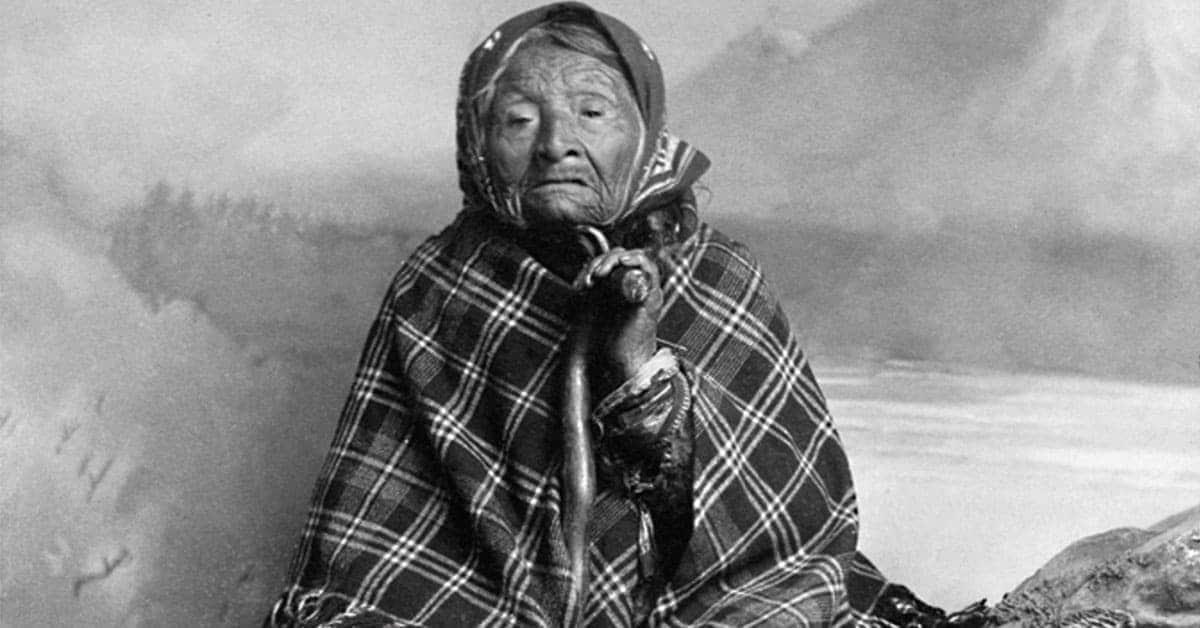 Following the signing of the Treaty of Point Elliott in 1855, which resulted in the Native American tribes of the greater Puget Sound region vacating lands which they had inhabited for centuries, one Native American woman chose to defy the edicts of the treaty and continued to live among the white settlers of Seattle until her death on May 31, 1896. She would become known as “Princess Angeline” and her portrait would be immortalized by the work of renowned photographer and ethnologist Edward Sheriff Curtis.

Kikosoblu was born in 1811 in what is now Rainier Beach in Seattle, Washington. She was the eldest daughter of Chief Si’ahl, from whom the city of Seattle got its name. Chief Si’ahl was the leader of the Suquamish and Duwamish tribes and was a signatory of the Treaty of Point Elliott in 1855. The treaty resulted in the relocation of the native tribes onto a reservation and paved the way for white settlement of Seattle.

Chief Si’ahl befriended one of Seattle’s founders, David Swinson “Doc” Maynard, a pioneer, businessman and doctor. Doc Maynard was an advocate of Native American rights and it was he who proposed that Seattle should be renamed after Chief Si’ahl. It was Maynard’s second wife, Catherine, who renamed Kikisoblu, Angeline, and the title “Princess” was given to her because she was the daughter of Chief Si’ahl. In reality, it was used, for the most part, condescendingly.

Angeline, unlike her father, refused to accept the terms of the Point Elliott Treaty. She defied its stipulation that she, along with the other members of the Suquamish and Duwamish tribes, should relinquish ownership of their land and make way for white settlement. She instead chose to remain and live among these settlers, in a decrepit two-room waterfront cabin. Angeline’s defiance was tolerated by the settlers, who saw her as harmless, even as a tourist attraction for visitors to their new settlement. Princess Angeline represented a link to the past, a remnant of a conquered people.

After the settlers had arrived, Princess Angeline lived a life far from the life of luxury one would associate with the royal title bestowed upon her. Being the daughter of Chief Si’ahl, Angeline would have been free from a life of menial work, which instead would have been carried out by the captured slaves of rival Native American tribes. But to make a living amongst the settlers, Angeline dug for clams and searched for mussels on the shore and sold them door to door. She made handwoven baskets to sell to the settlers and also did their laundry.

Like her father, Chief Si’ahl, Angeline converted to Christianity. She was well-liked and held in higher regard than the majority of her fellow Native Americans by the church ladies of Seattle. It was a frequent sight to see Angeline sitting on the sidewalk, rosary beads in hands, praying. However, her relationship with the settlers wasn’t entirely without strife. Angeline was subject to regular harassment from the local boys, who would throw rocks at her, and she was known to carry some around with her for throwing back. Some of the settlers also referred to her derogatorily as the “old crone.”

In January of 1856, news of an impending Indian attack on Seattle reached the Governor of Washington Territory, Isaac Stevens. On January 21, Governor Stevens arrived in Seattle aboard the USS Active. Stevens was unconvinced of the validity of the rumored attack and quickly left. But less than an hour after having sailed away from Seattle, new information came to light about an imminent Indian threat. The source of this information has been credited to Princess Angeline, her father, Chief Si’ahl and Chief Sucquardle.

On January 26, 1856, Seattle came under attack from a band of Indians. The residents were prepared for the assault. The Battle of Seattle lasted a mere day. With the aid of artillery fire and assisted by Marines of the Navy sloop of war, the Decatur, the Indian assault was repelled. Only two settlers were killed in the day-long battle. Angeline’s safety from the attack was credited to Henry L. Yesler, a local businessman and politician.

In 1891, Benjamin Harrison, the twenty-third president of the United States, visited Puget Sound. Angeline greeted him in her native language, Lushootseed. “Kla-how-ya,” she said as she shook his hand. Although Angeline knew many English phrases she simply refused to speak the language of the settlers. Despite the reality of the ever-changing world in which she was finding herself, Angeline continued to honor her culture and heritage by staying true to her Native American roots.

By 1896, the now elderly Angeline’s health was deteriorating and as a result, she had begun to stay in her cabin for days at a time. When the church ladies came around to check on Angeline, they noticed that she was wheezing and had a deep cough. They realized that she needed medical attention. Angeline finally relented and went to the local hospital and was examined by a doctor who advised that she remain and receive treatment and care. But Angeline would not stay.

Despite her poor health and crippling arthritis, Angeline continued to work, going to the shore to dig for clams. It was there that the renowned photographer and ethnologist, Edward Sheriff Curtis saw her. While Curtis stood and watched Angeline digging for clams, he felt as if he was looking into the past. To a time before the white settlers arrived. He knew that this was an image he needed to capture before the opportunity was gone.

Curtis was well aware of who Angeline was. She was the most famous person in Seattle. Her image decorated china plates and other souvenir items for tourists to buy while visiting Puget Sound. Angeline was wary of Curtis as he approached. Curtis spoke in Chinook jargon, a primitive trading language of the time. He opened his leather case which revealed lifelike portraits he had taken and gestured to Angeline that she allow him to take her photograph. Finally, he produced some coins and Angeline agreed to his request, receiving a dollar for her time.

Curtis brought Angeline to his studio at 614 Second Avenue. He had her sit down. Angeline daydreamed as Curtis set to work. The image Curtis captured was more than just Angeline’s portrait. The narrative at the time was that the natives were a primitive, inferior race, who had welcomed with open arms the white settlers. They had happily ceded their land and adopted the ways of life of a superior culture. Curtis’ portrait of Angeline captured something quite different.

There was no smile upon Angeline’s face. Her mouth was downturned, and by the sorrowful distant gaze upon her deeply wrinkled face, it was clear that this was a woman who had known tragedy in her life. This was a woman who had witnessed the dispersal of her people from their native lands. Who had watched an entire way of life being disrupted and changed by the influx of white settlers. It was the first image Curtis had captured of a Native American subject, but it was to change his life forever.

Two other images Curtis captured of Angeline also received critical acclaim. ‘The Clam Digger’ and the ‘Mussel Gatherer,’ were the images that Curtis really wanted to capture that day when he saw Angeline working on the shore. They represented a way of life that was disappearing slowly, and he wanted to capture them before it was too late. Curtis would go on to produce a series of volumes of images and descriptions of Native Americans and their way of life, entitled The North American Indian. The series would include 20 volumes and span over twenty-three years; from 1907 to 1930.

Angeline passed away in her cabin on May 31, 1896. Her death made the front page of the Post-Intelligencer newspaper. City dignitaries hailed the passing of Angeline as a much-beloved figure of their community. Beside, the article was a sketch of Curtis’s studio portrait of Angeline. The church ladies organized for Princess Angeline’s casket to be made in the shape of a canoe. Angeline’s funeral took place in Our Lady of Good Help Church in Seattle and she was buried at Lake View Cemetery. A plaque, attached to a granite headstone, reads that Angeline was buried, at her request, near the grave of Henry L. Yesler, the man who protected her during the Battle of Seattle.