Napoleon Bonaparte's Brother, Joseph, Was King of Naples and Spain but Somehow Ended up Moving to New Jersey 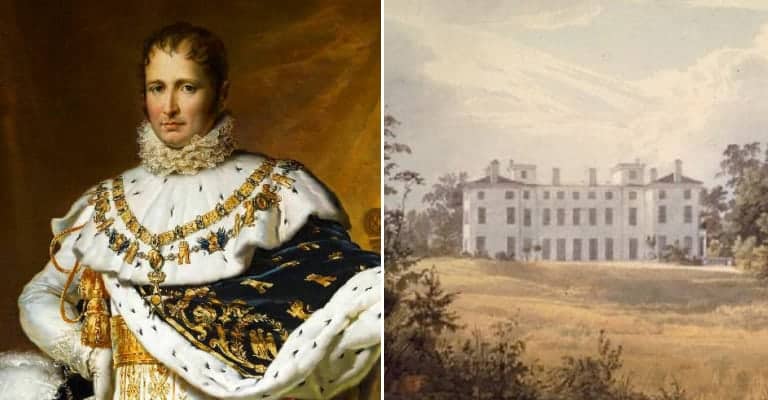 Napoleon Bonaparte’s Brother, Joseph, Was King of Naples and Spain but Somehow Ended up Moving to New Jersey

In 1805, the Bourbon king Ferdinand IV of Naples signed a treaty of neutrality with Napoleon, only to renege a few days later and openly side with Austria and Russia when they declared war against France. Unfortunately for king Ferdinand, Napoleon crushed the Austro-Russian armies, then turned his wrath on the Neapolitan king. He declared that Ferdinand had forfeited his throne, and sent Joseph, in nominal command of a French army that was actually commanded by Marshall Massena, to conquer Naples. Ferdinand was forced to flee his kingdom, and on March 30th, 1806, Napoleon issued a decree installing Joseph as King of Naples and Sicily.

It was a backwards realm that had suffered greatly from generations of misgovernment by corrupt and incompetent Bourbons. Joseph commenced an ambitious program of reform, seeking to raise Naples to the level of a modern and well administered state, along the lines of Napoleonic France. Feudal privileges and taxes were abolished; military tribunals were established to suppress rampant banditry; monastic orders were suppressed and their properties nationalized; public works programs were instituted to employ the poor and improve the kingdom; and public schools to educate young girls, and a college to educate young women, were established. The new king’s government was seen by most subjects as a vast improvement over the previous Bourbon regime, and Joseph settled down to reign as a popular and well liked monarch. He was thus not too thrilled when Napoleon made him switch crowns in 1808, giving up the Neapolitan throne in order to get crowned as king of Spain, instead.

As things turned out, Joseph had cause for unhappiness: he ended up leaving a kingdom where he had been extremely popular, for a kingdom where he was widely loathed. Napoleon had invaded Spain and dethroned its ruling Bourbons, replacing them with Joseph. The new king tried his best to win over the Spanish people, learning their language, disciplining French troops when necessary, attending bullfights, and expressing devotion to the Catholic Church. The Spanish were adamant in refusing to put up with him or the French, and rose in a massive revolt that drove Joseph out of Madrid within three months of his arrival.

Joseph begged Napoleon to let him return to Naples, where he could be more effective, but the Emperor ignored him, and sent a massive French army to restore him to power. The result was a bitter and brutal guerrilla war that swept the country, and eventually – with the support of a British army under Arthur Wellesley, the future Duke of Wellington – ended up expelling Joseph and the French from Spain. In the meantime, Napoleon’s empire started crumbling after his invasion of Russia ended in disaster, and allied armies steadily pushed the French back into Metropolitan France.

When allied troops entered Paris in 1814 and Napoleon was forced to abdicate, Joseph Bonaparte and his family fled to Switzerland. A year later, when Napoleon escaped from Elba and regained power, Joseph joined his younger brother in Paris. After Napoleon’s defeat at Waterloo and second abdication, Joseph, who had chartered an American ship, the Commerce, for an escape to America, came up with a harebrained scheme to spirit his brother to freedom. He proposed to switch places with the former Emperor, impersonating Napoleon while the latter sailed in his place to the United States.

Nothing came of Joseph’s plan to rescue his brother, and when he heard that Napoleon had surrendered to captain Maitland of the British Royal Navy’s HMS Bellerophon, he finally sailed off to the United States, leaving his wife and daughters in Paris. They would eventually move to Frankfurt, and then to Brussels. En route to the United States, Joseph’s ship was boarded and inspected twice by the Royal Navy, but he had fake identity papers, and they passed muster with the British inspectors. He made it to the safety of New York in late August of 1815, accompanied by a Spanish officer who remained loyal, an interpreter, a personal secretary, and a cook.

Joseph left New York for Washington, DC, hoping to meet president Madison, but he was intercepted en route by a messenger informing him that the American president would not be meeting him. So Joseph turned around, and set about getting comfortable and making the best of his new life in America. He managed to transfer a big chunk of his fortune, much of it in the form of Spanish royal jewelry he had managed to snatch on his way out of the country, and invested it in his new country.

In his first few years in the US, Joseph lived in New York City and Philadelphia, where his house became a hub for French expatriates. He also purchased a large tract of land in Upstate New York, containing a 1200 acre lake that he named Lake Diana, and that is now known as Lake Bonaparte. He eventually bought an estate, Point Breeze, in Bordentown, New Jersey, and spent significant time and effort expanding and landscaping it with extensive gardens in the picturesque style. However, the mansion was destroyed by a fire in 1820, so Joseph converted its sizable stables, which had survived the blaze, into a new mansion. There, he hosted and entertained many of the day’s leading intellectuals and politicians, including the Marquis de Lafayette, John Quincy Adams, Daniel Webster, and Henry Clay.

Another visitor to Point Breeze, albeit a less welcome one, was the Jersey Devil – a mythical cross between a kangaroo, bat, and goat, that, according to local legend, lives in southern New Jersey’s Pine Barrens. Joseph claimed to have been out hunting in the woods near his estate, when he came across some weird tracks, and following them, came face to face with the Jersey Devil. As the former king put it, the duo looked at each other for about a minute, neither moving, before the creature finally gave a hiss and flew away. Joseph Bonaparte’s stay in the US was eventually cut short by declining health, and he returned to Europe. He died in Florence, Italy, and was buried in the Les Invalides in Paris.

McCartney, Clarence Edward, and Dorrance, Gordon – The Bonapartes in America (2010)