USS Scorpion: The Mysterious Loss of a U.S. Submarine on a Spy Mission 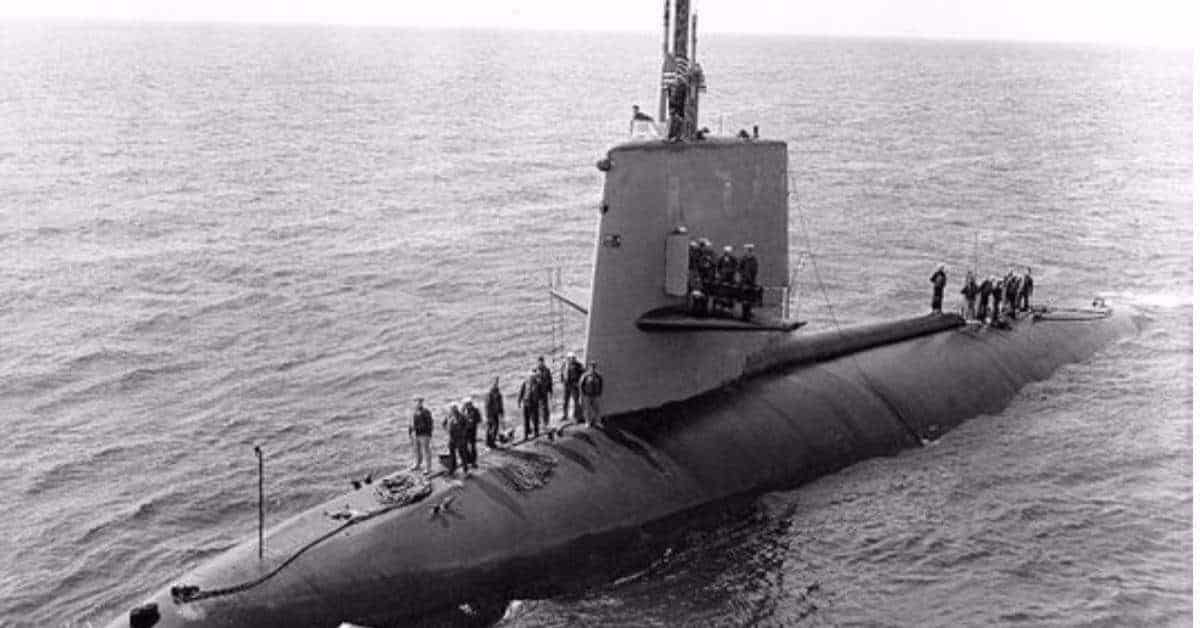 The Mysterious Loss of a U.S. Submarine on a Spy Mission

Considering the hazardous depths that submarines regularly operate in, the United States’ submarine fleet has an astonishing safety record. Since the end of World War II, the United States Navy has lost two submarines, an admirable feat given the number of boats in USN service over the past seventy-two years. The two boats the USN lost, however, claimed every life aboard each submarine.

The first submarine, the USS Thresher, sank in 1963 when a deep-diving test went horribly wrong. The second boat, the USS Scorpion, well, funny thing about the Scorpion‘s loss. No one seems to know why the submarine sank, and the United States government has yet to declassify the nature of the Scorpion‘s mission. There are several theories, including at least two of the nefarious conspiracy variety, but when all the evidence is beneath 9,800 feet of water; it’s difficult to prove much of anything.

Commissioned in 1960, the Skipjack-class submarine was part the USN’s conversion to nuclear power and featured a number of innovative design and technical advances. First tested in the USN’s final class of diesel-electric submarines, the Barbel-class, the Skipjack’s combined the control room, conning tower, and attack center in one place, thereby reducing redundancy and miscommunication.

The boats also featured a teardrop-shaped hull design, and single propulsion screw, which maximized the boat’s underwater speed. The blimp-shaped hull streamlined the Skipjack’s submerged performance and remained the fastest submarine in the USN until the introduction of the Los Angeles class in 1974.

Armed primarily with electrically-propelled Mark 37 conventional torpedoes and the Mark 45 ASTOR nuclear torpedoes, the class was cutting-edge when introduced in 1960. The Soviet’s comparable submarines, the NATO designated November class, were slower, louder, and less technically advanced than the new Skipjack’s, which made the American boats a premier underwater threat to the Russian Navy. Unfortunately for the USS Scorpion, however, at least one of the boat’s innovations may have been the culprit for its destruction.

Unlike the other five Skipjack class submarines, the Scorpion was anything but a testament to construction quality. When the boat was lost in 1968, the Scorpion was only eight years old, yet the submarine had a litany of problems. The tradition of crews nicknaming their ships/boats is an ancient one in maritime history, but when your sailors dub a craft named Scorpion the USS Scrapiron, it’s a solid indication that something is seriously wrong.

Following a special operations deployment throughout 1966, the Scorpion reported to the Norfolk Naval Shipyard for an extended overhaul. There’s no question the boat needed repairs desperately. The emergency blow system was non-operational, emergency seawater shut-off valves scheduled for decentralization were long overdue, and the hydraulic system suffered from chronic failures. Cold-war pressures, however, led to the boat’s anticipated thirty-six-month overhaul being cut to only nine.

The USN’s SUBSAFE maintenance, component, and structural testing program, instituted following the loss of the USS Thresher, was deferred at the order of Admiral David Lamar McDonald, the Chief of Naval Operations. Thus, when the Scorpion departed Norfolk on February 16, 1968, the boat left for deployment with 109 unfulfilled work orders, and a depth limitation of 500 feet.

The deployment got off to an inauspicious start. As the boat maneuvered out of the dock and through the harbor at Hampton Roads, 1,500 gallons of oil leaked from the Scorpion‘s conning tower. This, however, did not result in the boat’s recall, and the Scorpion proceeded to its scheduled deployment in the Mediterranean. One month later, as the boat’s problems continued to pile up, the Scorpion‘s captain, Commander Francis Atwood Slattery, submitted an emergency request for repairs.

He stated the hull was “in a very poor state,” and pointed out that valve leakage restricted the ship to a depth of three hundred feet. Following the completion of their mission in early May, the Scorpion departed the Mediterranean, now scheduled for extended overhaul in Norfolk, but command had one last mission for the submarine.

On May 20, the boat was ordered to observe a Soviet flotilla operating near the Canary Islands. Consisting of two hydrographic survey ships, an oiler, a destroyer, and an Echo II class submarine, US Naval command suspected the Soviet task force was taking acoustic measurements of NATO submarines and surface ships. The Scorpion maintained radio communication, however, an unusual problem surfaced with the boat’s radio traffic.

Beginning before midnight on the 20th until roughly midnight on the 21st, the Scorpion could not reach Naval Station Rota Spain, and ended up forwarding their radio traffic through a Navy Communications Station in Greece. Commander Slattery’s final message did not report any major malfunctions, and stated the Scorpion was closing in on the Soviet submarine and research group, running at a steady 15 knots at 350 feet “to begin surveillance of the Soviets.” Slattery also noted the boat’s position and included his estimate that the Scorpion would arrive in Norfolk on May 27.

On May 22, the USN’s underwater sound surveillance system (SOSUS) recorded at least two “acoustic events” that, coupled with the lack of communication from Scorpion, led the Admiralty to suspect the boat was destroyed. On May 27, the families of the crew gathered to welcome the ship home at Norfolk Naval Station. The ship never arrived. Later that evening the USN reported the ship was overdue and launched a public search.

On June 5, the USN declared the Scorpion and her crew of 99 hands were “presumed lost.” A court of inquiry convened to analyze the boat’s fate. The ongoing search discovered the remains of the Scorpion in late October when the USN’s oceanographic research ship, the Mizar, located the submarine’s wreckage under almost 10,000 feet of water.

This is where things get weird.

Theory #1: the Court of Inquiry Report

On January 31, 1969, the official inquiry concluded that “The certain cause of the loss of the Scorpion cannot be ascertained from evidence now available.” In 1984, however, the Norfolk Virginian Pilot and The Ledger-Star published classified documents that reported the disaster was likely caused by the detonation of a torpedo while the Scorpion‘s crew attempted to disarm it. This theory argued that stray voltage-activated the electrically propelled torpedo, which then armed and attacked its closest target: the Scorpion.

This report rejected the acoustic analyses used in the Court of Inquiries findings. Robert Price, Ermine Christian and Peter Sherman of the Naval Ordnance Laboratory (NOL), expert physicists on undersea detonations, their acoustic signatures, and their destructive effects, argued that the death noises corresponded with a hull failure at a depth of 2,000 feet. Their report concluded that an explosive event was unlikely, pointed out failures in the original testing methods, and argued that the Scorpion likely suffered a power failure. Bereft of power, the boat’s weakened hull could have collapsed as it sank before the crew regained control.

Dr. John Craven, Chief Scientist of the U.S. Navy’s Special Projects Division and primary author of the first theory, laid out a new argument in 1998. According to Craven, the Mark 46 torpedo used silver-zinc battery susceptible to overheating. This could have caused a fire capable of detonating the warhead, which might have opened the boat’s large torpedo-loading hatch and caused the Scorpion to flood and sink. Opponents point out that although the batteries had generated enough heat to blister torpedo casings, there is no other incident of explosion.

Four submarines vanished/sank in 1968: the French Minerve, the Soviet K-129, the Israeli Dakar, and the USS Scorpion. Proponents of this theory argue that each of these boats sank while engaging an opposing navy when the Cold War briefly, and exceptionally quietly, turned into a shooting war. Soviet spies had cracked US naval encryption codes, and the Scorpion was destroyed by a Russian torpedo in retaliation for the USN’s sinking of the K-129 two months prior.

Conspiracy Theory #2: Nature Did It

An underwater seaquake generated a pressure wave that crushed the Scorpion due to the boat’s structural design flaws.

There are quite a few more conspiracy theories, but, whichever theory you choose to believe, we’re left with one hard truth about the Scorpion‘s fate. A final resting place underneath 9,800 feet of water means that it’s unlikely anyone will know the submarine’s true story anytime soon.

Smithsonian Magazine – During the Cold War, the C.I.A. Secretly Plucked a Soviet Submarine From the Ocean Floor Using a Giant Claw

Haaretz – How Did Israel’s Dakar Submarine Sink 45 Years Ago