Murder, Mystery and Moneylending: The Peculiar Tale of the Cock Lane Ghost 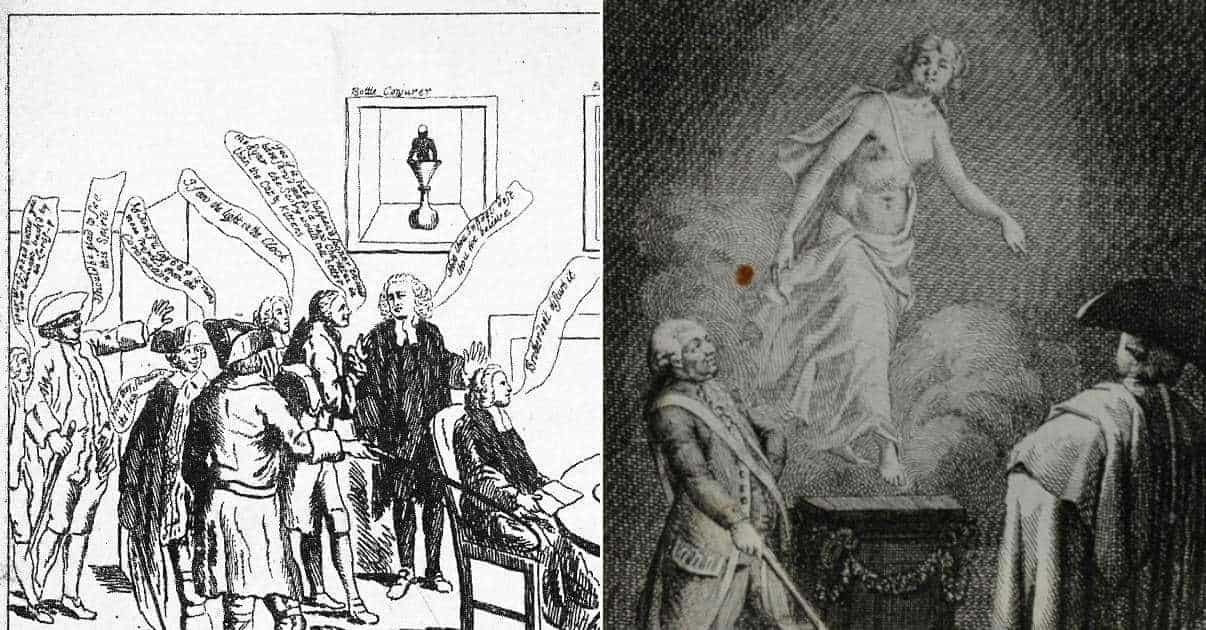 Murder, Mystery and Moneylending: The Peculiar Tale of the Cock Lane Ghost

In 1762, an unusual scandal riveted the population of London: the case of the Cock Lane Ghost. The story had something for everyone. Forbidden love, money, death and the supernatural were all elements in the sad tale of “Scratching Fanny of Cock Lane.” The ghost was reputedly that of a young woman, Fanny Lyne who was murdered by her lover just weeks before giving birth. After her death, Fanny haunted the couple’s former apartment in a house in Cock Lane; just a stone throw from Smithfield Market and St Paul’s Cathedral. Here Fanny made her presence known through strange knocking and scratching noises.

The story so entranced the general populace that they would block Cock Lane just to gain a glimpse of its haunted house. But the Cock Lane ghost also drew the attention of the London Society. Both the Duke of York and Dr. Samuel Johnson visited Cock Lane and took part in séances as they attempted to ascertain whether the ghost was real- or a fraud. The story led to accusations of murder and a sensational court case. It also provided an arena for a contest between persistent popular superstition and modern rationalism. Here then, is the extraordinary story of the Cock Lane Ghost.

Norfolk innkeeper William Kent was devastated when his wife, Elizabeth died in childbirth. Their baby boy however lived. So Elizabeth’s sister, Fanny Lyne, moved into the inn to help care for her nephew. Sadly, the little boy passed away soon afterward. However, the growing attraction between Kent and Fanny did not. The couple fell in love and wanted to marry. However, as Kent had been married to Fanny’s sister, and they had produced a living child, the couple was forbidden to do so by church law. Fanny and Kent tried to part, but their feelings persisted. So they reunited in London, where they passed themselves off as a married couple.

In 1760, the couple was in lodgings and Kent began to practice as a moneylender. However, it was not long before their landlord discovered the couples’ guilt secret. To compound matters, Kent had lent him money, and he refused to pay back his debt. Fanny and Kent had no choice but to seek new lodgings. Then they met parish clerk Richard Parsons who offered them rooms in his house in Cock Lane. The couple settled in, and Kent continued with his money lending business. Once again, lent his new landlord a considerable sum of money: 12 guineas to be paid back a guinea a month.

Fanny soon revealed she was pregnant. Not long afterward, Kent had to return to the country for a wedding, so he asked Parson’s 11-year-old daughter to care for his ‘wife’ while he was away. It was then that strange, inexplicable scratching noises began. Mrs. Parsons told Fanny workmen were making the noises. But the sounds persisted even when no work was occurring. Then, local pub landlord James Franzen visited the house and saw a ghostly apparition going up the stairs. Terrified, he fled. On his return, Kent was equally unimpressed and decided to move out.

This decision was timely as Parsons was becoming difficult about the repayment of his loan. Shortly after moving out, Kent took his former landlord to court. The case was still ongoing in January 1761, when Fanny became ill with smallpox. By February 2nd, she was dead. Not long afterward, Kent won his case against Parsons. Grieving and sorely in need of a fresh start, he moved again and started a new career as a stockbroker. Meanwhile, in Cock Lane, the noises, which had stopped for a time after the Kent’s moved out, began again with a vengeance.

The noises focused around young Elizabeth Parsons who identified this ghostly visitor as Fanny Lyne. Parsons agreed with her- despite the fact that Fanny had not died at Cock Lane He decided to enlisted the help of the Reverend John Moore, a local preacher with Methodist leanings. Although many people still believed in ghosts, Methodists were particularly noted for their belief in the spirit world. Moore visited Cock Lane and agreed that it was indeed haunted. He and Parsons developed a mode of communication with the spirit- and it had an engrossing tale to tell.

The ghost communicated with Parsons and Moore using a knocking system: one knock for yes, two for no. In this way, it confirmed it was indeed the spirit of Fanny Lyne- and that she had died not from smallpox but aconite poisoning- at the hands of William Kent. This story obtained a certain amount of credibility when paired with the complaints of Ann Lyne, the sister of both Elizabeth and Fanny. She was angry at Kent because he had sealed her sister’s coffin before she could view the body. Was this to hide the fact there were no smallpox marks on Fanny’s corpse?

The newspaper The Public Ledger eventually learned of the story- and published it. Very soon, William Kent found himself a suspected murderer. So he set about clearing his name. Accompanied by the two doctors who had attended Fanny in her last days and Reverend Thomas Broughton, a Methodist minister brought in by the Reverend Moore to substantiate the ghost; he returned once again to Cock Lane- for a séance presided over by the Reverend Moore in the bedroom of the young Elizabeth Parsons.

‘Are you the wife of Mr. Kent?‘ Moore asked the ghost. Two knocks followed- no, which was correct, as Kent and Fanny never married. Moore then asked if the ghost had died of natural causes which elicited a further two knocks. “By poison?” asked Moore. The ghost knocked in the affirmative and further questioning established Kent had administered it. ‘Kent, ask the ghost if you shall be hanged!’ Asked a heckler in the company. Kent did so- and the spirit answered ‘yes.’ “Thou art a lying spirit,” exclaimed Kent, “thou are not the ghost of my Fanny. She would never have said any such thing.”

The Cock Lane Ghost now came to the attention of the authorities. The haunted house was attracting such crowds that Cock lane was becoming blocked- causing a public nuisance. So an investigation into the validity of the ghost began. Elizabeth Parsons was removed from her home for examination- the strange knockings and scratching following her. Meanwhile, a commission was set up under the authority of Dr. Samuel Johnson. The commissioners attended various séances in the presence of Elizabeth – and finally decided the final test of the matter should be conducted at the coffin of Fanny Lyne, which was being kept in the vault of the Church of St John in Clerkenwell.

Elizabeth Parsons was left behind while the commissioners, Moore and Kent all went to the church. There, they asked Fanny’s spirit to reveal herself- but nothing happened. It even failed to respond to the presence of William Kent. This admission prompted Moore to declare that perhaps the ghost was not Fanny after all but a mischievous imposter. Kent seized upon Moore’s admission and asked him to write an affidavit to that effect so that he could clear his name. But Moore refused, stating he still believed the spirit was haunting Kent because of his past sins.

On July 10, 1762, William Kent took Richard Parsons, his wife, the Reverend Moore and two other accomplices to court. They were charged with: “a conspiracy to take away his life by charging him with the murder of Frances Lynes by giving her poison whereof she died.” Kent was finally able to seek recompense-because the Cock Lane ghost had finally been unmasked as a malicious fiction.

After the fiasco in the crypt, Samuel Johnson’s report concluded that” “It is…the opinion of the whole assembly that the child [Elizabeth Parsons] has some art of making or counterfeiting a particular noise and that there is no agency of any higher cause.” This belief was confirmed by the investigation into the girl. For when Elizabeth was made to keep her hands above the bedclothes, the scratching sounds did not occur. Furthermore, a maid had spotted her attempting to conceal a small piece of wood on her person that she later used to make the noises.

Elizabeth herself, once discovered, admitted her deception. Her father had forced her into it, she said. This explained Parson’s extreme unwillingness to have his daughter isolated from her family during the investigation. It also explains why Elizabeth herself broke down several times, crying that she was afraid for her father and on once occasion admitting that he would be: “ruined and undone, if their matter should be supposed to be an imposture.”

The trial lasted just thirteen hours. Kent testified, as did Fanny’s maid, who emphasized the loving nature of the relationship between Kent and her mistress. Fanny’s doctors confirmed that she had indeed died of smallpox. Richard Parsons, meanwhile, was revealed as an impecunious drunk, who had fabricated the ghost in vengeance for Kent taking him to court over the unpaid debt. However, there were still those who supported the idea of the Cock Lane ghost who were willing to testify in court. Catherine Friend, who had rented the apartment after Kent, explained she had left Cock Lane because of the haunting.

After fifteen minutes deliberation, the jury returned a verdict of guilty. The Judge adjourned sentencing, so the defendants could come to financial terms with Kent and avoid prison. In January 1763, the Reverend Moore and one of the accomplices finally agreed to pay Kent £588. Richard Parsons and his wife, however, continued to maintain their innocence. Mrs. Parsons was sentenced to a year in prison and her husband two. Richard Parsons was also sentenced to be publicly pilloried three times- once at the end of Cock Lane. Unusually, the crowd, who took collections for him rather than abusing him, treated him with unexpected kindness.

Some people at least still believed in the Cock Lane ghost.