Mount Everest: The Harsh Reality Of Life In The Death Zone 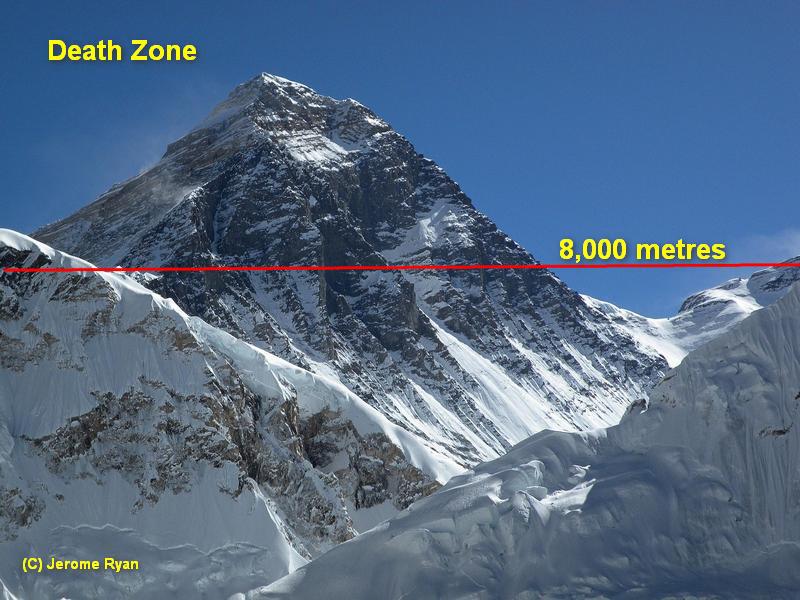 Mount Everest: The Harsh Reality Of Life In The Death Zone

As of June 2017, 288 people have died attempting to scale the highest mountain in the world. And in a lot of cases, the bodies of these climbers who perished in their attempt remain frozen in the spot where they died. Their bodies have become an eerie reminder to other would-be adventurers of the risk that they are taking with their own lives when taking on this enormous challenge.

When the British mountaineer George Mallory was asked why he wanted to climb Mount Everest, he answered, “because it’s there.” For Mallory, Everest represented the greatest challenge for a mountaineer in the world. In 1924, Mallory and his climbing partner Andrew Irvine set out to become the first people to reach the summit of Mount Everest. Mystery still shrouds their expedition, as both Mallory and Irvine perished on their climb. For seventy-five years Mallory’s body lay on Mount Everest until in 1999, a team of climbers decided to set out to see if they could establish what had happened to them on that fateful day.

When they found Mallory’s body, the evidence suggested that he had fallen to his death. They discovered that Mallory had a rope injury around his waist and it is believed that both he and Irvine were roped together when they fell. However, the question remains as to whether they fell on their ascent to or their descent from the summit. Those who believe that Mallory and Irvine reached the top argue that when they were last spotted by a fellow member of their expedition team, Noel Odell, they were just a few hundred vertical feet short of the summit and “going strong for the top.”

Others point to a pair of snow goggles found in Mallory’s pocket which suggested that he had probably taken them off when it got dark during their descent. Also, Mallory had promised his wife that he would leave a photo of her on the summit of Mount Everest when he reached it, but when his wallet was searched and despite all of the other documents contained in it being perfectly preserved, no photo was found. Unfortunately, neither was the Kodak camera which the team of climbers had hoped would provide more conclusive proof as to whether Mallory and Irvine had successfully scaled Everest. Irvine’s body has never been found. And thus, the honour of being the first expedition to reach the summit went to Sherpa Tenzing Norgay and New Zealander Edmund Hillary in 1953.
Mallory and Irvine’s deaths highlight the levels of risk involved in scaling Everest. Mountaineers taking on this great challenge face many dangers. The top causes of death include avalanche, which has been responsible for 77 deaths, fall – 67 deaths, altitude sickness – 32 deaths, and exposure – 26 deaths. And the risks to climbers aren’t confined solely to their journey to the summit, of the 288 people who have died climbing Mount Everest, 71 have died on their descent from the summit.

Green Boots
One of the most well known of all the climbers who perished while attempting to scale Everest is Tsewang Paljor, better known by his nickname, “Green Boots.” While three of the members of a six-man Indo-Tibetan team decided to turn back, Paljor and two other members, Tsewang Samanla and Dorje Morup, made the fateful decision to carry on. It was a decision which cost all three men their lives. Paljor’s body and his recognisable green boots are passed by every climber who takes the North East route to the summit of Mount Everest.

The 2015 movie “Everest” tells the tragic story of how eight climbers died when a violent storm hit during their final ascent to the summit, capturing them in a powerful blizzard. In the movie, Jake Gyllenhaal plays Scott Fischer who was one of the eight people who died that day. The movie features a scene where Fischer’s friend Anatoli Boukreev, after realising that it is too late to save his friend, covers Scott’s face with his backpack before turning away.
The harsh reality of the “Death Zone,” which is the zone above 26, 247 feet, is that at this extreme altitude there is not enough oxygen in the air for humans to breathe. Without supplemental oxygen, you will eventually suffocate to death. This is why so many bodies remain on Mount Everest. It is too dangerous to attempt a descent while simultaneously transporting a body at extreme altitude.
Even in cases where the person is still alive, climbers have had to weigh up the risk of trying to save someone’s life with endangering their own. A particularly sad case with tragic consequences occurred in May in 1998. Francys Arsentiev had just become the first American woman to summit Mount Everest without supplementary oxygen. While she and her husband, Sergei, were descending following this momentous achievement, they became separated. When Sergei arrived back into camp on May 23rd, he realised that Francys had not made it down.

Although exhausted, Sergei decided to try and rescue her. During his ascent, he met an Uzbek team of climbers who had found Francys in difficulty. The Uzbek team had tried in vain to rescue Francys, abandoning their own summit attempt in the process, but had to give up when their oxygen ran out. The men had no choice but to abandon Francys to save their own lives. Sergei continued his ascent to try and save his wife’s life.
The following morning, a team of climbers including, Ian Woodall and Cathy O’Dowd, discovered Francys, who amazingly was still alive, but was slipping in and out of consciousness. O’Dowd and Woodall spent nearly an hour with Francys in temperatures as low as minus 30 degrees Celcius. “Don’t leave me,” Francys pleaded, but O’Dowd and Woodall realised that she was beyond rescuing and had to make the heart-wrenching decision to leave her behind. O’Dowd recalls the experience in her book, Just for the love of it: “I had never encountered anything like this. I had passed bodies, I had friends not come back, but I had never watched anyone die. Nor had I had to decide to leave them.”

As was the case with Paljor (Green Boots), Francys Arsentiev’s body remained right next to the North Col route for years, being passed by hundreds of climbers going to and from the summit. In 2007, Ian Woodall returned to move Francys body away from the North Col route and out of sight. He brought with him a note from her family which he put it in her pocket before covering her body with the American flag.

Personal accomplishment versus moral responsibility
A more controversial case involved English mountaineer David Sharp. It is believed that Sharp had successfully scaled Everest without a support team or bottled oxygen on May 14th, 2006, but had gotten into difficulty during his descent and decided to take shelter in a cave. What makes Sharps story so controversial is that he was passed by around 40 climbers on their way up to and down from the summit, including double amputee Mark Inglis from New Zealand.
Inglis and his team did stop to check on Sharp on their way to the summit. They found him unconscious and reportedly near death so feeling that there was nothing they could do they decided to continue on to the summit. However, on their descent nine hours later, Sharp was still alive. Sir Edmund Hillary, the first man to reach the summit of Mount Everest, lambasted Inglis and the others who made no attempt to save Sharp’s life. “If you have someone who is in great need and you are still strong and energetic, then you have a duty, really, to give all you can to get the man down and getting to the summit becomes very secondary.”
Hillary believes that “the whole attitude towards climbing Mount Everest has become rather horrifying. The people just want to get to the top. They don’t give a damn for anybody else who may be in distress and it doesn’t impress me at all that they leave someone lying under a rock to die.” In his defence, Inglis says that his team were the only ones of the 40 climbers to pass Sharp that day to check on him. Inglis also says that he was the least capable to save Sharp as he was a double amputee. Inglis claims to have radioed his expedition manager and that he had told him that there was nothing they could do as Sharp had been without oxygen for too long and was effectively dead.

This, however, is disputed by a University of Otago scientist and mountaineer, Dr Phil Ainslie, who believes that “had Sharp been given oxygen by another climber he could have recovered something like 80 percent of his capacity.” Dr Ainslie added that “getting Sharp down the mountain would still have been difficult, but possible for other climbers breathing bottled oxygen.” Sharp’s body remains in what has become known as “Green Boots Cave” on Mount Everest.

Just for the love of it by Cathy O’Dowd.

Spiegel.de: A Disabled Man Caught between Fame and Disgrace.

Mpora: The Gruesome Truth About The Climbers Who Die on Mount Everest.