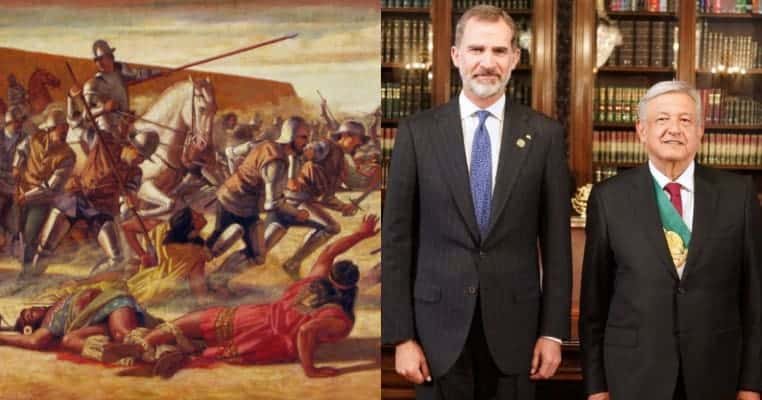 Along with superior military weapons and tactics, Cortes and his men brought diseases, like smallpox, to the indigenous people, who did not have an immunity built up against them. Many, many of the indigenous people in present-day Mexico died of these diseases. While accidentally getting someone else sick can hardly be considered a violation of human rights, one can’t rule out the possibility that biological warfare, in which the Spanish intentionally infected the indigenous people, was used.

Much of North America, from what is now Florida to Washington State, along with what is now Mexico and Central America, became part of the Spanish Empire. Spain did not conquer all of the indigenous peoples in what is now the United States, although later Americans successfully carried out genocide against them. However, it considered itself to be the true owner of the land.

21. The Church Functioned as Part of the Government

Because of the Roman Catholic Church’s role in the Reconquista of Spain in Europe, it came to function as an arm of the Spanish government. With the colonization of the Viceroyalty of New Spain, missionaries often accompanied the conquistadors in the hopes of converting these indigenous people to Catholicism.

20. Some Conversions Were Peaceful, but Others Were Not

Many of the Amerindians adopted the Christian god, the god of their conquerors, as yet another god in their pantheon. This belief did not require them to change their belief system. More forcible conversions led to the erasure of many local customs and traditions.

The Spanish Inquisition was a period in which people who were not Roman Catholic were severely persecuted and tortured to try to force them to renounce their faith and convert to Catholicism. Many natives died under the Mexican Inquisition, which used many of the same tactics.

18. The Conquistadors Found Some Gold, but They Found Much More Silver

They found so much silver – literally mountains of it – that between the 16th and 18th centuries, 150,000 tons of silver was imported to Spain. The silver Spanish peso became the most important currency in all of Europe. So the conquistadors kind of fulfilled that aspect of their agenda. They did get very, very rich.

17. The Spanish Empire Used the Indigenous Peoples as Slave Labor to Mine Silver

Where the Aztecs, Mayan, and other indigenous groups had once thrived, they were now wholly subjugated and forced to work as slaves. They were paid subsistence wages to perform backbreaking work in silver mines, while their Spanish overseers became immensely wealthy.

News about mining accidents is still prevalent today. In the Latin American silver mines, mercury, a deadly neurotoxin, was commonly used to help mine the silver. The tunnels were so dangerous that mothers would actually maim their children to prevent them from having to work in them.

15. The Viceroyalty of New Spain Lasted Until 1821

That year, Mexico and other countries in Central and Latin America gained independence. Three centuries of Spanish rule had caused immense changes in Mexican society, from the falls of the Aztec and Maya empires to the importation of new people groups. The principal language became Spanish, and the predominant religion became Roman Catholicism.

14. There Are Still Aztecs in Mexico Today

Though the great Aztec Empire fell in 1521, there are still Aztec communities that live in Mexico’s vast rural stretches. They are referred to as the Nahua people, and they retain the original Aztec language, Nahuatl, as well as many Aztec customs. The existence of the language is considered to be endangered.

13. 20% of Mexico’s Population Today is Indigenous

In addition to the Nahua, there are 61 indigenous people groups that Mexico’s constitution recognizes today. Many indigenous people assimilated into mainstream Mexican culture and lost much of their traditions and culture, but these people groups have maintained many aspects of their pre-modern culture, including language and some religious beliefs (minus human sacrifice).

12. As in America, They Are Fighting For Their Rights

The Mexican constitution guarantees certain rights to indigenous people groups, but they constantly have to fight for rights to their own autonomy, territory, and access to resources. Even when these rights are explicitly mentioned in national law, enforcing and protecting them is an uphill battle.

11. They Are Subject to Government Maltreatment and Abuse

Farmers have been attacked and harassed by military groups who occupy their territory, in defiance of laws that prevent military encampments in native lands. Native peoples who speak out against government corruption, such as preventing them from electing their own leaders, may be incarcerated, tortured, or even murdered.

The subjugated place that indigenous peoples have in Mexican society today is a reflection of the genocidal policies implemented by the Spanish Empire. As when they were slaves with Spanish overlords, their communities are plagued with malnutrition, poverty, and sometimes violent repression by the government.

Pope Francis’s tenure has been marked by advocacy for social justice, especially among non-Catholics and communities that have historically faced persecution from the Vatican. During his five-day visit, he spoke out against drugs, environmental destruction, and forced emigration, all issues that are relevant to Mexico and particularly its indigenous peoples.

Chiapas State is one of the least-Catholic areas of Mexico, and it has high populations of indigenous peoples. He held an open-air mass there, which was attended by tens of thousands of people, many of the indigenous. Indigenous women read Bible passages in their own native languages, something that they were previously not allowed to do because the Vatican did not permit their languages.

7. He Asked Them for Forgiveness

While in Chiapas, he said in a speech, “On many occasions, in a systematic and organized way, your people have been misunderstood and excluded from society. Some have considered your values, culture, and traditions to be inferior. Others, intoxicated by power, money and market trends, have stolen your lands or contaminated them. How sad this is. How worthwhile it would be for each of us to examine our conscience and learn to say, ‘Forgive me!'”

6. Amlo’s Call for an Apology Is Part of His Social Justice Agenda

Some might argue that asking Spain and the Vatican to apologize for crimes against Mexico’s indigenous people is trite and unnecessary. However, Amlo sees it as necessary to address the genuine grievances that they have and the contemporary challenges that they face. He stated, “There were massacres… The so-called conquest was done with the sword and the cross. They raised churches on top of temples.”

5. It May Be a Merely Symbolic Gesture

4. Spain is Rejecting Calls for an Apology

Spain’s present king, Felipe VI, had nothing to do with an event that happened five centuries ago. He is calling for a “constructive perspective,” saying, “The arrival, 500 years ago, of Spaniards to present Mexican territory cannot be judged in the light of contemporary considerations.” He believes that both Mexico and Spain can read their histories without anger.

3. Amlo Himself Has Apologized to the Indigenous Peoples

2. He Declared 2021 as the Year of Historic Reconciliation

2021 marks exactly 500 years since the fall of the Aztec Empire. However, many skeptics wonder whether there is actually anything to reconcile. After all, history has moved forward, and Mexico, Spain, and the Vatican are all on friendly terms. However, the plight of Native Americans in the United States shows that generational trauma does continue to affect people for generations.

1. The Call is For Personal and Cultural Reconciliation

Maybe Amlo recognizes that the key to ending the social ills that have long plagued Mexico, such as the war on drugs, increasing crime, and poverty lies in creating a culture of peace and reconciliation. His call for an apology may be less a political maneuver than it is an attempt to make reconciliation the new trademark of Mexico and the means of bringing it into a new era.

“Mexico demands apology from Spain and the Vatican over conquest.” March 26, 2019. BBC News.