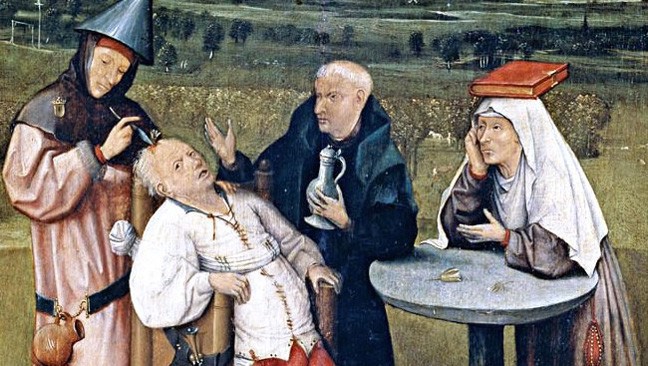 Bloodletting is one of the most well-known medieval medical methods. It came from the Greek idea of humors and that there were four humors, blood, phlegm, black bile, and yellow bile. The idea was that many illnesses were caused by an imbalance of the humors, namely an excess of blood. So then came the idea of bloodletting to remove the excess blood and re-balance the humors. It was believed that women did this on their own at times through menstruation.

As the process progressed through the Middle Ages, a system was developed. It was believed that bloodletting near the affected area was the best way to a cure. It was also written that certain veins and locations would affect different organs or illnesses. Books and instructions were released for physicians to follow so that they could have the best results for their patients.

It was bloodletting that led to the distinction between a doctor and a surgeon. A physician in the Middle Ages was likely to recommend bloodletting but not likely to perform it, that was left to the barbers. The barber would be the one to cut the vein and drain the blood, sometimes not even under the supervision of the physician, so it was up to the barber to know the specific medical trends at the time.

Bloodletting was not a safe or reliable process. It was believed that enough blood had to be taken that the patient swooned or fainted. This created a delicate line between the right amount of blood and too much. It was not uncommon for a patient to be drained of too much blood and die or to have their wound get infected. It wasn’t until the 19th century that bloodletting really started to fall out of favor and was condemned as a dangerous and ineffective practice by physicians.

There were a number of different medieval medical treatments that involved using different animals. Different animals and animals parts were believed to have different healing effects on the patient. Many of the treatments had no real basis other than guesses or they were steeped in mythology and ancient practices. Insects could also be used. For example to treat jaundice a patient was to swallow nine lice mixed with ale every morning for a whole week.

One such cure was to wear a donkey skin to treat rheumatism. The patient was to wear the entire skin of the donkey, ensuring that all of their sore joints were covered by the hide. It was suggested that the skin not more worn more than fourteen days and not to wear it after it had begun to rot because that might invite other illness.

If a person was suffering from asthma the cure for that was simple. All the patient had to do was swallow some young frogs. It is unclear why the frogs were supposed to help cure asthma and there is no evidence that it would have been successful.

To cure gout the process was much more involved and similar to the treatment of quinsy. First the physician would take a red-haired dog and boil it in oil. Then the physician would add worms, pig’s marrow and a variety of different herbs to the pot. This would then be made into a mixture that could be smeared on the affected area.