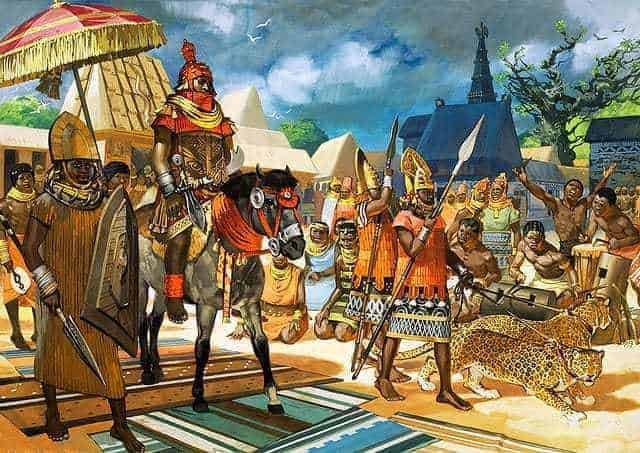 The Ethiopian Empire is known as the last stronghold of Africa. It covered the northern half of modern-day Ethiopia beginning in 1137 with the Zagwe dynasty. The Zagwe dynasty continued the Christianity of the Aksum Empire that existed prior to the conquest of the region by Queen Yodit (whose successors were overthrown by Mara Takla Haymanot the founder of the Zagwe dynasty).

In 1270, the Zagwe dynasty was overthrown by a King who claimed to be of the same lineage of the Aksumite kings who were descended from Solomon. Thus, the Solomonic dynasty was founded by the Habesha, who gave Abyssinia its name. This dynasty lasted until the late 20th century and conquered and incorporated all the people within modern Ethiopia. The Empire also fought off the Italian, Arab, and Turkish armies in order to maintain independence for hundreds of years.

There were numerous monasteries built during the early period of the Ethiopian Empire which perpetuated the Christian culture. From 1200 to 1250, beautiful rock carved churches were created to show the religious mindset of the Ethiopian kingdom and its reconnected ties to Jerusalem. Economic revival came during the Zagwe dynasty, and trade with the Muslim world flourished. Gold, ivory, frankincense, and slaves were exported out of Ethiopia. However, Abyssinian law forbade that Christian slaves be exported to Muslim lands.

It was during the Solomonic dynasty that much of the expansion of the Empire occurred, and the export of slaves exploded. Thousands of slaves were sold to the Ottoman Empire, and the population drastically declined in the Lake Tana region. The expansion caused problems with other regions and many tried to conquer Ethiopia. None of them completely succeeded until Italy finally got the upper hand against the Ethiopians in 1935.

The Kingdom of Zimbabwe existed from 1220 until 1450 and is most remembered for Great Zimbabwe. Great Zimbabwe is the largest stone structure is southern Africa and it dates back before the colonial era. The region was settled in the 11th century but it was not until the 13th century that the kingdom was formally established. Records left by 16th century explorer Joao de Barros indicates that Great Zimbabwe was still inhabited at that time.

The Kingdom was known for building elaborate stone buildings and walls. Great Zimbabwe was made through a method of dry stonewalling which required a significant level of expertise. It was at Great Zimbabwe that the monarch of the Kingdom resided with 200 to 300 advisers and royals within the main city.

The city was the center of the society and as many as 20,000 people lived on the outside of the city, kept separate from the ruling class by large walls that still stand today. The Kingdom got its wealth from cattle, the staple food for the region. There was also a reliance on the gold trade because the city was built over a gold mine. There have also been some that claim the city was a religious center for the Shona people as a place to worship their main god, Mwari.

During the height of its power, there is evidence that the Kingdom was rich in gold and imported cloth, glass beads, and ceramics while the cattle and farming provided the basic needs of the people. Remains of Chinese pottery and stoneware, an Arabic coin, and a Persian bowl suggest that their trade extended into the East. Historians have debated what caused the decline of the Kingdom. Some believe it was due to changes in the environment that limited the usable land for cattle and that the gold trade declined. Others have suggested that their trade routes may have been disrupted by Portuguese merchants.

The Benin Empire was located in southern Nigeria. It was one of the oldest and most highly developed states in the coastal hinterland of West Africa, dating as far back as the 11th century CE. The founders of the Empire were the Edo people, who were ruled at first by the Ogiso dynasty and called the land Igodomigodo. The Ogiso were somewhat mythical kings that lasted until the 13th century. During the 13th century the Edo people grew dissatisfied with the Ogiso and decided to ask Prince Oranmiyan of Ife to rule over them. It was his son Eweka who began the first king of Benin.

Despite taking the throne, authority of Benin did not rest with Eweka but rather with a hereditary order of local chiefs. Ewuare the Great reigned from 1440 to 1480 and was the most famous king of Benin. He firmly moved power from the chiefs to royalty. Ewuare the Great was described as being a warrior and a magician. It was his popularity and leadership that allowed him to establish a hereditary succession to the throne of Benin and vast expand the territory.

Eware was the political, spiritual, judicial, and economic leader for his people. He also built massive walls and fortifications and moats. The towering inner wall was surrounded by a deep moat that historians believe must have taken 1,000 men working 10 hours a day, seven days a week for 5 dry seasons in order to complete. Excavations have found evidence of 4,000 to 8,000 miles of earthen wall that were estimated to take 150 million man hours to complete.

The Portuguese eventually visited the empire at the end of the 15th century. Benin became known for artifacts of bronze, iron, and ivory. The British followed the Portuguese in the 16h century and established their own trading relationship and brought to Europe tales of the Great Benin. The empire lasted until 1897 when the British burned, looted, and destroyed Benin City. Countless priceless artifacts were destroyed, and the beautiful city that had entranced visitors for centuries was no more.