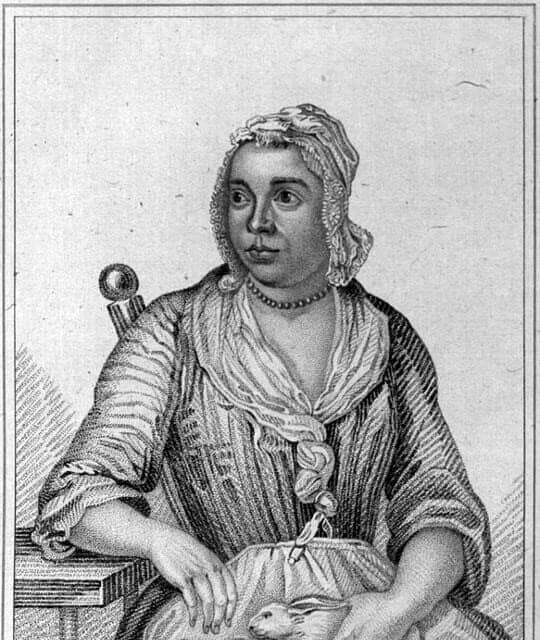 When Cyriacus Ahlers arrived he may have already suspected that there was something amiss about what was going on, but he played the part of a believer. He found it suspicious when John Howard would not let him help deliver the rabbits but he did convince Howard to let him take some of the rabbit pieces with him. Ahlers examined the parts to see that they had been cut with a man-made tool and that there were even bits of straw and grain embedded in the feces of the rabbits that were birthed.
An investigation began and suspicious grew higher when Ahlers reported his findings to the King. In response St. Andre secured several affidavits from a number of physicians who swore that they had witnessed Mary Toft birth rabbits. The story grew in prominence as more and more physicians travelled to study Mary Toft for themselves. John Maubray believed that a woman’s pregnancy could be influenced by what she saw and believed and therefore thought of Mary as evidence of that belief. James Douglas another man-midwife believed the entire thing was a hoax and insisted that Mary Toft be put under constant watch. Then despite having gone into labor several times, Mary Toft never delivered a rabbit.
So it came on the 4th of December, another skeptic Thomas Onslow revealed that Joshua Toft had been buying young rabbits. When he came forward with that information others came forward to tell that they had helped to sneak rabbits to the seemingly pregnant Mary Toft. St. Andre remained convinced and even published a 40-page pamphlet on December 3rd which revealed all of his observations. However, the skeptical doctors that were becoming ever more suspicious started to question Mary and when they threatened her with a painful operation to find out the truth…she confessed.
Mary told them that when she miscarried, her cervix was open enough that she was able to shove into her womb the claws and body of a cat and the head of a rabbit. She claimed a midwife had shown her how to do it and that she was told that she would never want for the rest of her life if she succeeded in the hoax. Mary Toft was arrested but the courts could not figure out what to charge her with and so she was set free.
Fate was not as kind to the doctors who believed her story. Many of them were laughed out of their careers and had to publish embarrassing recants of their written work on the subject. People also started to question the expertise of doctors and of men-midwives due to the failures of St. Andre and John Howard to see the truth. Faith in doctors declined for a period and both the doctors involved and Mary Toft were satirized in papers for years to come.
For her part Mary went home and continued her life as normal. She had a daughter in 1727, was caught stealing in 1740 and died in 1763. Her long ploy damaged the lives of the doctors who believed her much more than it did her own.