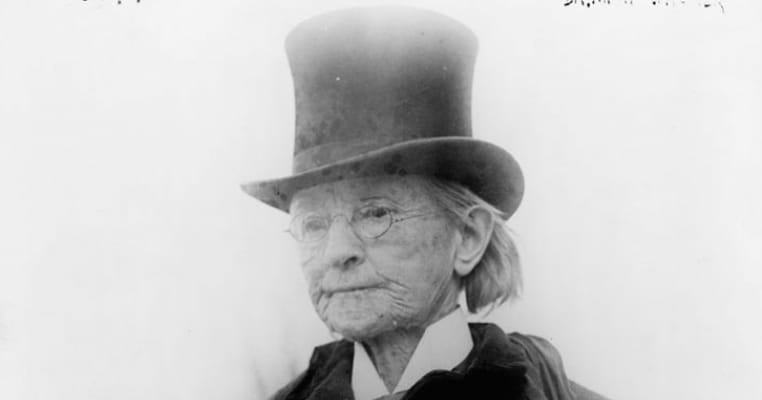 Mary Walker, more commonly known as Dr. Mary Walker, was a Victorian Era woman who was born ahead of her time. Some people might refer to Walker as one of America’s hidden historical treasures. Walker was not just a women’s rights advocate and abolitionist, but she was also a teacher, prohibitionist, surgeon, prisoner of war, author, and the first and only female Medal of Honor recipient. On top of all this, Walker was one of the first women in American history to earn a medical degree and start up her own medical practice.

Mary Edwards Walker began to make her mark in this world on November 26, 1832. She was the seventh and youngest child born to Alvah and Vesta Walker of Oswego, New York. Unlike most children in Walker’s time, her parents progressively raised their children and did not follow the traditional gender norms. In fact, Walker’s parents raised her and her siblings to be free thinkers and question the rules and regulations of society. Walker’s parents had a nontraditional way of parenting which definitely opened the door to their daughter’s sense of justice and spirit of independence.

During Walker’s childhood and young adult life, education occurred both at home and at school. While Walker’s time in school receiving an education was more or less traditional, her time at home was not. Part of the education Walker received at home was not to listen or be persuaded by gender roles. The females of the Walker household took part in hard manual labor, and the males could often be found cleaning the house, cooking, and sewing. Outside of the hone, Walker went to a one-room school, which her parents had started. Therefore, it was Alvah and Vesta Walker who founded the first free schoolhouse in Oswego during the late 1830s.

From the start of their family, Alvah and Vesta wanted their children to have the best education possible. They wanted their daughters to be just as well-educated as their sons. The girls did just this as Walker, and her two older sisters all received an education beyond the one-room schoolhouse. All three of the girls attended Fulton, New York’s Falley Seminary school. For Walker and her sisters, this school was no different than the education they received as a child. Like their parents, the Falley Seminary emphasized modern social reform with gender roles, hygiene, and education. For Walker, personally, her learning at Falley Seminary further influenced her ambition to defy the traditional gender roles society placed on people, especially women.

It was during her time in Falley Seminary when Walker started reading medical texts. Her father had many books on physiology and anatomy and, from a young age, Walker was interested in these books. It did not take long for Walker to determine that she wanted to go into the medical profession. The only problem was that she did not have the funds to go to a medical college. Therefore, after graduating from Falley Seminary, Walker began teaching. Once she had saved enough funding, she enrolled herself into Syracuse Medical College. As the only female in her class, Walker graduated with her medical degree in 1855.

Dressing for Health and Comfort

Since the females in the Walker household completed manual labor, the women did not often dress like typical Victorian Era women. In fact, Walker’s mother agreed with her daughter’s views that corsets and tight lace were restricting. As Walker grew, she kept these views. When she was a teacher, she was often criticized by her students and their parents for her attire. At one point, Walker was harassed by some neighbor and other boys, who threw eggs at her for her choice of clothing. IN medical school, Walker was often teased by both colleagues and patients.
However, this did not persuade Walker to dress more like a socially acceptable woman. By the start of the Civil War,

Walker’s typical attire was wearing trousers with suspenders under a knee-length dress with a tight waist and full skirt. When Walker was arrested in 1870, she was criticized and teased by the men in the prison because she dressed like a male. A year later, Walker wrote about women’s fashion, “The greatest sorrows from which women suffer to-day are these physical, moral, and mental ones that are caused by their unhygienic manner of dressing!”

After graduating from Syracuse Medical College, Walker decided to open a practice. For a few years, she ran this practice with her husband, Albert Miller, who was also a physician. Unfortunately, Walker’s private medical practice never really did well. Walker lived in a time where women were just starting to enter the medical profession. Because of this, people did not often trust female physicians. On top of this, women were only not heavily supported socially, especially in a male-dominated field. This reasoning along with Walker divorcing her husband and the outbreak of the Civil War led to Walker closing her private practice.

Immediately when the Civil War started, Walker tried to figure out what she could do to help. First, Walker went to Washington and decided to sign up to volunteer as a surgeon for the Army. Unfortunately, Walker was rejected merely because she was a woman. She was then offered an occupation as a nurse. She tried to decline and, once again, volunteer as a surgeon, but she was told she had to start off as a nurse, so she did. On July 21, 1861, Walker was a nurse for the First Battle of Bull Run. She was also a nurse for the patient hospital.

Once Walker became a surgeon in the Civil War, she became the first female Union Army surgeon for the military. As a volunteer surgeon, she was part of the Battle of Fredericksburg and the Battle of Chickamauga. Walker became employed through the Army of the Cumberland in the fall of 1863. She was given the title, “Contract Acting Assistant Surgeon.” Eventually, Walker would join the ranks of the 52nd Ohio Infantry as an Assistant Surgeon.

End of the Civil War

In April of 1864, Confederate troops captured Walker as a spy and kept her as a prisoner. While she was under Confederate control, she assisted a surgeon in an amputation. Walker was not released until August of that year when the Union Army exchanged a Confederate surgeon they had captured for Walker. In November of 1865, President Andrew Johnson agreed to award Walker with the Medal of Honor. Two people had recommended Walker for the medal, George Thomas and William Sherman. With this medal, Walker became the first, and the only woman awarded the honor.

After the Civil War, Walker kept busy. For a while, she managed an orphanage in Tennessee. At one point, she was in Kentucky working as a supervisor for one of the state’s female prisons. Walker then furthered her time as an instructor and writer. During this time, Walker was passionate about women’s rights, health care, and dress reform. She was often arrested for her activism, but this did not dampen her spirit. During her later career, she wrote a couple of books where she discussed dress reform and women’s rights.

Walker further dove into women’s rights and became a member of Washington’s Central Women’s Suffrage unit. Of course, the medical profession was still a priority, so Walker went around fundraising for Harvard University’s medical program. Walker’s goal for this funding was to establish a position for a female professor. While Walker did try to vote in 1871 and was refused, this was not her focus in the women’s rights movement. Walker’s focus was more of gender roles and dress reform.

Two years before Walker passed away, the government took away her Medal of Honor. It was in 1917 when the United States Congress established a pension for all Medal of Honor recipients. Because of this, they had to separate Army and Navy recipients. While the Navy decided not to review any of their recipients, the Army did. In their review, they decided to delete over 900 of their recipients. They then sent letters to everyone on this list requesting them to send their medals back. Walker refused and continued to wear her badge until her dying day on February 21, 1919, after suffering from an illness.

Sixty years after the Army board revoked Walker’s Medal of Honor status, President Jimmy Carter reinstated the Medal in 1977. He only restored it for Mary Walker and five other people. In 2000, Walker was inducted into the National Women’s Hall of Fame. Walker’s legacy continues to live on, especially for women. Throughout her life, Walker pushed the boundaries of gender roles, dress reform, and women’s rights. She became successful in a mainly male profession and is still the only woman to have received a Medal of Honor from the United States Army.