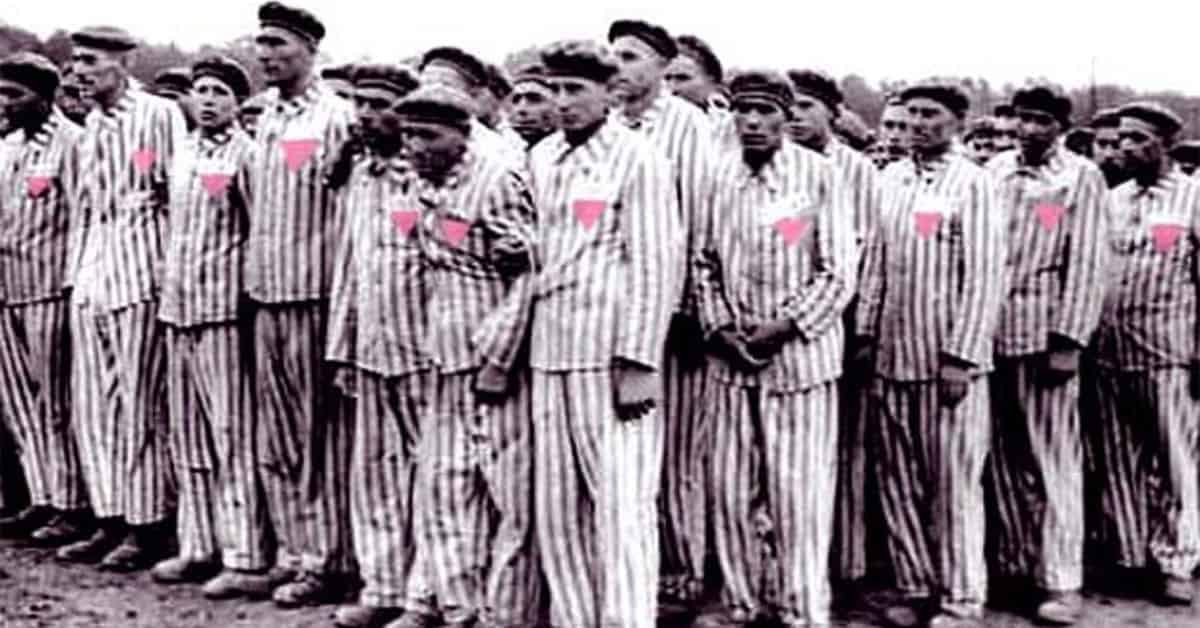 Many of the guards in the concentration camps believed that homosexuality was a disease and the only ‘cure’ was hard work and humiliation. Incredibly, the Nazis seemed to believe that homosexuality could ‘spread.’ In his memoirs, Rudolf Hess wrote that gay men were isolated to ensure they could not spread their homosexuality to the guards and other prisoners.

As soon as gay prisoners arrived, they were ridiculed and beaten by the guards and separated from other inmates. At the Sachsenhausen camp, homosexuals were forced to test the durability of new synthetic soles. The test involved running up to 40 kilometers a day non-stop where they were followed by vicious dogs and beaten if they stopped. The prisoners ran until they dropped. Those in charge of the underground rocket factory at Dora-Mittelbau or in the Flossenburg and Buchenwald stone quarries tended to give the riskiest assignments to the gay prisoners.

Many homosexuals in concentration camps were effectively worked to death by a combination of incredibly hard labor and practically no rations. Gay men were always given the toughest tasks and were usually the first to endure beatings at the hands of guards. At Buchenwald, gay men were systematically murdered. To fulfill liquidation ‘targets,’ the guards gave homosexual prisoners impossible tasks. An example was forcing them to carry enormous rocks; they inevitably crumbled under the strain and executed for their failure.

Also at Buchenwald, Nazi doctors said they created a synthetic sex hormone that made gay men straight. The implants were a complete failure yet details of these experiments were not mentioned at the Nuremberg trials. Survivors of the camps spoke about the horrific treatment they received. One prisoner, Pierre Seel, recalled how he was tortured, raped, sodomized and beaten. On several occasions, the guards threw syringes at him as if he were a dartboard. His worst experience was watching the Nazis parade his lover in the yard and unleash dogs upon him. Seel’s lover was ripped to pieces and eaten by the animals; a scene that understandably haunted Seel for the rest of his life.

When gay men were not getting brutalized by the guards, they were beaten and mistreated by their fellow inmates. It was common for gay men to align themselves with Kapos or other prisoners in positions of authority. These homosexuals were known as ‘doll boys’ and received a certain level of protection while their affair lasted. Being a Kapo’s lover didn’t protect gay prisoners from the guards, and in many cases, the Kapo would kill the gay man once he got bored.

Some homosexual prisoners managed to get clerical and administrative jobs which shielded them from the worst recesses the guards and other inmates. One other way to survive was to agree to castration as a means of ‘curing’ their perceived sexual deviancy. At one stage, gay prisoners could agree to castration to benefit from reduced sentences. Towards the end of the war, homosexuals were castrated whether they agreed to it or not.

Ultimately, at least 15,000 homosexual men were officially sent to concentration camps although the figure is probably much higher. An unknown number of these men died in the camps; many of them were beaten and tortured to death in yet another sickening reminder of the evil deeds perpetrated by the Nazis.