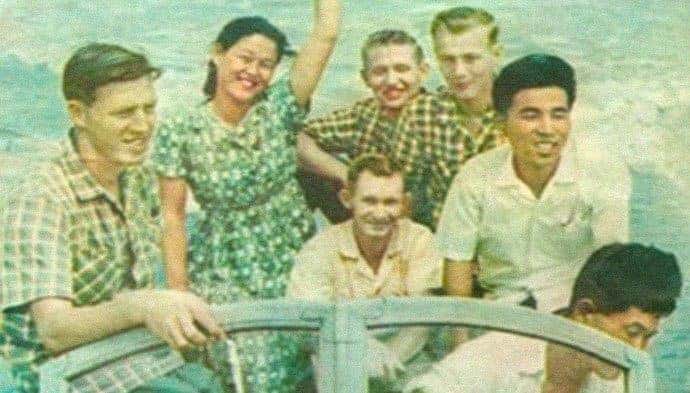 No other place on Earth is more secretive, more mysterious, and more impenetrable than North Korea. To this day, very little is known about the politics of the country, often making it nearly impossible to distinguish fact from fiction. Most of what we know comes from defectors who tell us of painful starvation, brutal indoctrination, and a complete lack of political and social freedom unimaginable to the free people of the West. Needless to say, since the North Korean state came into existence in 1953, it has been known as an extremely undesirable place.

Though Abshier was the first to defect, relatively little is known about him, as he was shy, passive, and had the misfortune of dying young, unlike many of his fellow defectors. But we do know that he led a troubled life from a young age. By the age of 14, he became a ward of the state, living at the Illinois Soldiers and Sailors Children’s School. Enlisting in the Army gave him a way to escape his circumstances, though by 1962 he found himself in trouble again. Stationed at the DMZ (Demilitarized Zone) on the North Korean border, he was caught smoking marijuana on a handful of occasions. Already demoted once and fearing court-marshal or outright dismissal, he made a fateful decision.

Abshier left his post and started walking on a dirt road, straight into what was then known as “no man’s land”. A fellow soldier spotted him, called Abshier to return, but the soldier kept walking. He vanished into a wasteland riddled with landmines and unexploded munitions. No one was sure where Abshier was for days. Did he defect? Was he hiding in somewhere in the DMZ? Or was he just AWOL somewhere in South Korea, enjoying yet another exotic cigarette?

Two weeks later, however, Radio Pyongyang ended the mystery byproudly proclaiming Abshier a defector. He was quickly put to use by the Communist regime. Soon, the North Korean propaganda machine made him state things like “I have never seen such a clean and cultural city as Pyongyang: overflowing with happinessâ€¦the [North Korean] people are all leading free, happy, and peaceful lives and working hard and diligently constructing for a happier tomorrow”.

Later, North Korean radio claimed that Abshier “came over to North Korea unable to endure the prick of consciousness and repress indignation at the doings of the United States Army in South Korea, and the humiliating life in [his] U.S. Army unit.” Further insisting that he was “subjected to intolerable insults and persecution of [his] superiors in [his] army life.”

Reality in North Korea was often the opposite of what was stated publicly. We know this was the case because the North Koreans eventually allowed another serviceman and defector by the name of Charles Jenkins to return to the West. Jenkins told of a very different reality in North Korea. Abshier, Jenkins, and two other American military defectors lived in a tiny one-room house, with no beds, no running water, and electricity that only worked some of the time. Their only source of water for drinking and bathing was a nearby river.

Despite propaganda claiming otherwise, the American soldiers received very little food, often going hungry. All four defectors were forced to spend long hours learning “Juche”, a twisted combination of communist doctrine, North Korean social collectivism, and improvised philosophies. When not memorizing strange ideas, Abshier and the others were forced to spend long hours teaching English to North Koreans who were probably being groomed to be intelligence agents. Failure to memorize propaganda or to teach English well enough was often met with severe beatings.

But Abshier’s fate was perhaps worse than most, as he was described by Jenkins as “the most scared,” and “the simplest” of the Americans. This led to him being taken advantage by one of the other Americans, James Joseph Dresnok, who endlessly harassed and taunted him until the men were later separated.

In the late 1970s, toward the end of the Abshier’s short and ill-fated life, he and the other three American defectors began acting in North Korean films, the first of which was called “Nameless Heroes.” The Americans played evil Western characters who were always defeated by noble North Korean patriots. He and his American cadre gained minor celebrity status in North Korea, which must have been a bright spot in their otherwise difficult lives.

Only a few years later, on July 11, 1983 Abshier suddenly collapsed in his home in North Korea, dead of a heart attack by the age of 40. From military demotion and defection to an improvised and miserable life where he suffered endless abuse in a strange land, Larry Abshier’s unhappy life seems to possess no substantial achievement beyond the provision of a cautionary tale for anyone else tempted to imitate his actions.