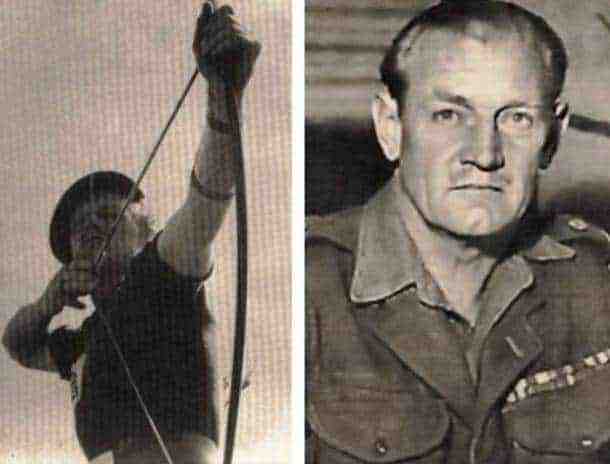 With a name like Mad Jack, it’s a certainty that you’ve done a few things that make other people question your sanity. Mad Jack Churchill definitely did many things that made those around him wonder just what was going on in his head. His service during World War II reads almost like an action novel. Churchill is believed to have carried out the very last recorded longbow and arrow killing in action, and was known to carry a sword.

Mad Jack was born John Malcolm Thorpe Fleming Churchill in 1906 in the British colony of Ceylon. He moved to Hong Kong at the age of four and then settled in England in 1917. He attended King William’s College and graduated from the Royal Military College in 1926. He served in Burma for a time before leaving the army in 1936. After that, he worked a number of odd jobs including being a male model, playing the bagpipes and shooting a bow and arrow in The Thief of Bagdad, and working as a newspaper editor in Nairobi, Kenya. In 1939 he competed in the World Archery Championships in Oslo.

While Mad Jack definitely led an interesting life, none of it compared to what was yet to come. In 1939 he returned to the army after the German invasion of Poland. He was made part of the British Expeditionary Force. In 1940, Churchill and his unit (the Manchester Regiment) came upon a German patrol near L’Epinette, France. Churchill told the men in his unit that he would fell the first German with an arrow and that would be the signal to attack. True to his word he killed the first German in the patrol with his longbow.

He participated at the Battle of Dunkirk, and then decided to volunteer for the Commandos. On December 27, 1941, he was the second in command of No. 3 Commando in Operation Archery. The operation was a raid on the German garrison at Vagsoy, Norway. Churchill would never do anything halfway, so when the ramps fell from the first landing craft, he jumped ahead from his position and started playing on his bagpipes. He played “March of the Cameron Men” loudly and proudly before throwing a grenade and running into battle. For his bravery and service, he was awarded the Military Cross and Bar.

Churchill was an aggressive soldier and leader. He refused to back down or give up ground to the enemy without making them pay a heavy price. He often went on raids and counterattacks, taking small groups of soldiers that were hand-picked by him (likely men who were equally skilled and fearless) to fight against the advancing Germans.

By July 1943, Mad Jack Churchill was now a commanding officer leading 2 Commando. He led his men with his Scottish broadsword around his waist, a longbow and arrows around his neck, and bagpipes under his arm. He was oddly equipped compared to his men, but Churchill believed that any man who went into action without a sword was improperly dressed. In diaries and writings of other men who served with Mad Jack, his presence was reassuring and a strong example for them to follow. No. 2 Commando landed in Italy during the autumn of 1943 with the objective of stopping the Germans from placing artillery fire on the western half of the Bay of Salerno. It was Churchill who directed the final counterattack, and his men managed to stop the Germans.

It was during the intense fighting at Salerno that Churchill came up with a particularly effective strategy. He ordered his men into six parallel columns in the middle of the night. The area they were fighting in was overgrown so his counterattack had no chance of catching the Germans by surprise. So he went with a different approach. Mad Jack told his men to shout “Commando!” as loud as they could as they attacked. This prevented them from shooting each other in the pitch-black night and completely confused the Germans. All total, Churchill and his men took 136 prisoners and accomplished all of their objectives.

It was during the same campaign that Churchill decided to sneak out from the camp one night with his corporal. As they walked toward the town in hopes of catching a German or two, they heard German soldiers digging all around them. Guided only by the glow of a cigarette, they managed to surprise two of them, Churchill coming out of the darkness with his sword drawn. He ordered the men to put their hands up and they complied. He left one prisoner with his corporal and took the other with him.

He used his prisoner as a shield as he carefully went to the other Germans digging and ordered them to surrender to his sword. By the end of it he took 42 prisoners and he marched them all back to enemy lines carrying their own weapons, mortars, and bombs, and dragging their wounded in a cart. Churchill stated that he always made his prisoners carry their own weapons because it slowed them down, he just made sure to take their rifle bolts out.

In 1944, he was in Yugoslavia leading his commandos yet again and given another seemingly impossible mission. Mad Jack was given orders to raid the island of Brac which was then held by the Germans. He put together a ragtag force of 1,500 Partisans, 43 Commando, and one troop from 40 Commando. At the attack, Churchill led the 40 Commando and the 43 Commando, while the Partisans stayed at the landing area. Only Churchill and six other men made it to their objective. Churchill was still playing “Will Ye No Come Back Again?” on his now famous bagpipes when a mortar shell killed the other six. He was knocked unconscious by a grenade and captured.

He was interrogated in Berlin before being sent to Sachsenhausen concentration camp. In September 1944, not long after being imprisoned, Churchill and an RAF officer managed to crawl under the prison wire and then through an abandoned drain. The men had hoped to make it to the Baltic coast, but they were captured near Rostock. In April 1945 he was transferred with 140 other prominent prisoners to Tyrol, a concentration camp that was guarded by SS. A delegation of prisoners then approached senior German army officers and told them of their fear of execution. The German army unit decided to protect the prisoners and the SS left. The prisoners were then released and Churchill walked all the way to Italy where he met an American armored force.

Still not done with the war, Churchill was sent to Burma to fight in the Pacific war. By the time he reached India, the war was over and Churchill lamented the sudden end stating “If it wasn’t for those damn Yanks, we could have kept the war going for another 10 years!” After the war, Churchill remained in the army until he retired in 1959. His life never had a dull moment, and he lived to be 89 years old.