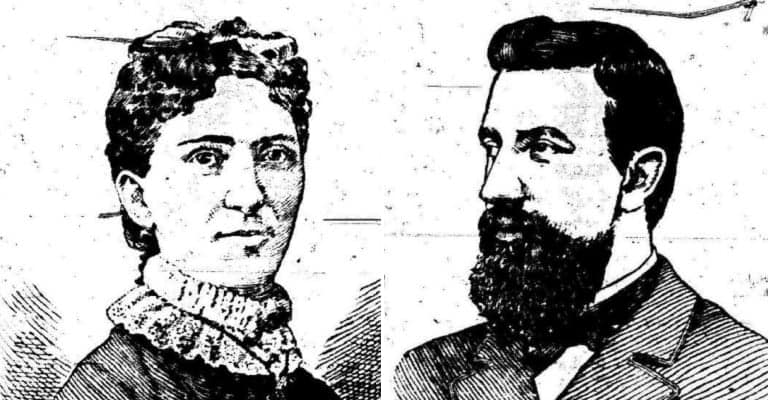 The grand jury returned indicted Elma Whitehead and Pettit for first-degree murder. He was already in custody, so a warrant was issued for her immediate arrest. As a local newspaper described what happened when the Sheriff arrived: “A cheerful fire burned on the hearth and it seemed almost sacrilege to break the pleasure of that circle with such cruel news. After discussing the weather for a few minutes, the deputy told Mrs. Whitehead he had a warrant for her arrest. The information was received with composure by herself and her father. It was not until a half later when Mrs. Whitehead had prepared herself for the cold, cheerless drive before her that she evinced signs of emotion. Her admirable self-control gave way then, and she cried without restraint“.

She arrived at the courthouse jail, which already hosted her coconspirator, William Pettit, around midnight. A comfortable couch had been arranged for her, and she was given the most commodious and cheerful – relatively speaking – cell in the establishment. Newspapers reported that she evinced remarkable composure, but doubted whether she had managed to get any sleep that night. The following morning, upon waking up, Pettit was served with his first-degree murder charges.

In March of 1890, the court granted William Pettit a continuance. The prosecutor then sought a continuance for Elma Whitehead, as well. In support of the state’s motion, the prosecutor amended the charging documents to aver that, two weeks before Mrs. Pettit’s death, her husband had proposed marriage to Elma Whitehead. She was alleged to have accepted, the marriage to occur when William Pettit was “left alone”. As reported by a local newspaper, the prosecutor further alleged: “many secret conversations and much correspondence between the two defendants, and charges them with criminal intimacy, both immediately before and after Mrs. Pettit’s death.” The court granted the prosecution’s request for a continuance.

While the evidence seemed strong against William, there was widespread public doubt about whether he would get convicted. Aside from his having many powerful friends, Elma funded his defense, paying for top-notch lawyers. She was eventually released on bail, and her trial was delayed indefinitely. She immediately hit the road along with her father, traveling throughout the US for a couple of years to avoid getting subpoenaed. William Pettit remained behind bars until the trial.

The doubters proved wrong, and a jury had little trouble convicting the reverend in late 1890, and sentencing him to life with hard labor. He contracted tuberculosis in prison, but even as he wasted away, he appealed his verdict, his legal bills still footed by the absent Elma. He won and was granted a new trial in 1893, but died on the same day the ruling was handed down. Elma Whitehead, in failing health since her lover’s death, died five years later.

Crawfordsville Weekly Journal, October 25th, 1890 – The Corpus Delicti: Judge Snyder Rules That It Has Been Established; The Testimony of the Witnesses; Dr. Yeager on the Stand Two Days

Crawfordsville Daily Journal, November 6th, 1890 – Defense Opens: A Full Outline of What the Defense Will Endeavor to Prove Set Forth

Daily Argus News, The, March 17th, 1890 – Facts and Fancies Gathered Here and There About People and Things