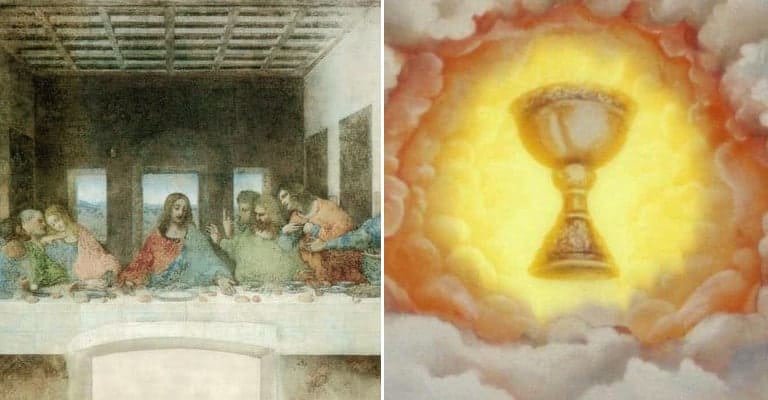 4. A Group of People Think the Holy Grail Is In Canada

There is another legend that suggests that the Holy Grail is in Canada, and for this legend, there may actually be some historical evidence. The idea is that when the order was given for the Knights Templar to be rounded up, tortured, and executed on Friday the thirteenth in 1307, some of them escaped by boat and carried their secret treasure with them. As descendants of the Vikings, they were able to navigate the waters to Iceland, which was settled by Vikings, on to Greenland, and finally to Nova Scotia. Some believe that it was buried at a place called Oak Island.

Oak Island contains some symbols that seem to bear a connection to the Knights Templar. In 1795, some teenagers who were playing discovered a shaft that led to a platform of wooden logs. Every 10 feet down was another platform of wooden logs, indicating to would-be treasure hunters that the pole had been meticulously engineered with the intention of hiding something. Booby traps were also placed at different points of the shaft. So many excavations have been performed, and so much money has been poured into trying to uncover the treasure that must lay within that the place has been nicknamed “the money pit.” Many believe that it was in this very pit that the Knights Templar buried the Holy Grail.

3. Many Grail Hunters Think the Chalice is in Glastonbury

Glastonbury, now widely believed to be the legendary site of Avon where King Arthur was buried, was also where the Joseph of Arimathea legend says that the pre-eminent Jew arrived in England. One long-held belief is that when Joseph came there, he set his staff on the ground. It immediately budded into the tree that is now known as the Glastonbury Thorn; the descendants of this original tree bloom every year at Christmas, and a bough from the tree is given to the queen as part of the Christmas celebration. One favorite Medieval story suggested that Joseph had been buried there, as well.

As such, many grail enthusiasts believe that it the grail buried somewhere in Glastonbury, possibly at the site of the church that Joseph of Arimathea allegedly built. Others think that it is somewhere else in the mound associated with Glastonbury – the Celtic Glastonbury Tor – where King Arthur and Lady Guinevere were believed to be buried (stories surfaced in the 12th century that their coffins had been found). Many feel that it was brought to Glastonbury by the Knights Templar, who hid their treasures (biblical relics) throughout the British Isles. It was only fitting that it should be protected at Glastonbury.

2. Some Believe the Holy Grail Is Still In Jerusalem

Other people believe that the Holy Grail never left Jerusalem, the site of the Last Supper, as well as the crucifixion, death, burial, and resurrection of Jesus. The Knights Templar never removed it, nor was it brought to England by Joseph of Arimathea. One version of the Jerusalem grail legend suggests that it is buried somewhere on the Temple Mount, probably under the Dome of the Rock. As a site sacred to both Christianity and Judaism, and considering its association with the death of Jesus, it is possibly one of the most likely places where it was buried. The Knights Templar did not discover it, or if they did, they did not remove it.

Another version of the Jerusalem grail legend holds that it was buried at the site of the cross. This legend suggests that the grail in question is the one that was used to catch the blood of Jesus. It is believed to have been laid between two rocks, one of which has eroded. Still another version suggests that it was covered at the tomb of Jesus. Several sites have been identified as the potential tomb where Jesus was buried, so if it were there, it probably would have been discovered by now. However, Jerusalem has many archeological secrets which it has yet to give up.

1. There Are as Many Holy Grail Legends as There Are Hunters

The exact number of grail legends is yet to be ascertained. Many who endeavor on their own grail quest come up with their version of not only what precisely the grail is – the cup from the Last Supper, another cup associated with the Passion, or something else entirely – but what the story is surrounding it. Some suggest a story that predates even Christianity, such as the connection between the Arthurian grail legends and Celtic stories about cooking utensils that were believed to have magical powers. Others are primarily concerned with what happened to the grail following the resurrection.

We may never truly know with any forensic degree of certainty where any of these relics are or how they got to their current location. The Oak Island money pit is yet to divulge any of its secrets, and if the grail is indeed being kept somewhere like Fort Knox, there is no reason to believe that that secret will be given up any time soon. What may be ultimately concluded is that they are nothing more than stories that sprang up in different cultures as a means of connecting a pre-Christian past with the people’s contemporary religious beliefs. Still, one has to wonder what Jesus’ disciples did with the cup that He drank from on His last night on earth.

“In Search of History: The Holy Grail.” Documentary by The History Channel.

“The Secret History Of The Knights Templar”. The History Channel.