This Parade Celebrates the Nazis and Latvian Legion Every Year 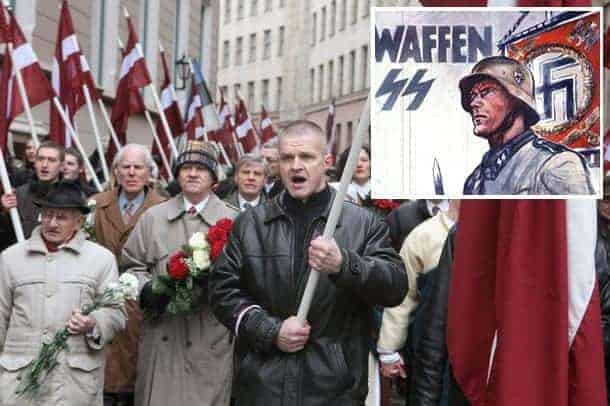 This Parade Celebrates the Nazis and Latvian Legion Every Year

In March 2016, a parade in Riga, the capital of Latvia, honored the veterans of Latvian Legion. The men not only survived World War II, but they lived through a specific 1944 battle.

The celebration was controversial because the Latvian Legion was an ally of the Nazis, and more specifically the German Waffen-SS, to fight the Soviet Army. Nevertheless, over 1,000 people marched through the streets of the Riga in the area known as the Old Town. A strong security presence was planted along the route.

The Problem with the Parade

Since leaving the Soviet Union and joining the European Union, much of Latvia’s Russian minority felt disrespected by the parade. A quarter of Latvia’s two million people identify as Russian. They aren’t in favor of the Legion or what it represents. In fact, Moscow thought the celebration glorified the Nazis as well. Jewish groups equally had concerns.

Simon Wiesenthal Center representative Efraim Zuroff explained that “It’s a very sad day to see these people marching and to see Waffen-SS troops glorified as freedom fightersâ€¦Anyone who fought for the victory of the Third Reich shouldn’t be a hero.” Like Simon Wiesenthal himself, Efraim Zuroff also played a significant role in seeking justice for Jews by indicting Nazis and other fascist World War II criminals to trial.

Every March 16, the veterans of the Latvian Legion honor the date of the 1944 battle and march throughout Riga. The Legion actually lost that battle, as the men were unsuccessful in stopping the Soviet advance. This failure led to Latvia being subject to the Soviet occupation of nearly 50 years. The soldiers can still recall the fateful day they tried to defend their homeland.

Eduards Zirdzins, told the Latvijas Avize newspaper, “I’ve faced death – in the Legion and when I was sent to Norilsk [a Soviet prison camp]. Since returning, I see every day as a gift to be appreciated.”

Also known as the Molotov-Ribbentrop Pact, and officially known as the Treaty of Non-aggression between Germany and the Union of Soviet Socialist Republics, this treaty granted a neutrality agreement between the two countries. It was signed by German and Soviet foreign ministers Joachim von Ribbentrop and Vyacheslav Molotov, respectively.

Other stipulations of the pact included the division of areas in Poland, Lithuania, Estonia, Finland, and Romania, as well as Latvia. Adolf Hitler and Joseph Stalin agreed not only to the written guarantee of non-belligerence between their countries, but they secretly wanted to control the territories known as political “spheres of influence.”

The Invasion of the USSR

As history explains, Adolf Hitler ended the pact on June 22, 1941, when the Germans attacked Soviet positions in Eastern Poland under Operation Barbarossa. The Nazis then invaded the USSR.

Because of bad blood between Latvia and the Soviet Union, many Latvians joined the Legion and fought against the Soviets, even if it meant they were allies to the Nazis. The Latvian Legion veterans believe they were fighting for their own independence from the Soviet rule.

Although they fought alongside Nazis, the soldiers proved to be strong fighters in defending their country. Claims have led many to believe that the Legion, or at least some of its members, took part in murdering Jews, especially during the German invasion of Latvia in 1941. The early stages in which the Nazis overtook and occupied the country are quite discerning.

Although the Waffen-SS was forced to withdraw their position, the Soviets did not break the Latvians’ opposition. Just a couple days later, the 15th division of the Waffen-SS counterattacked the Soviets on March 18. Led by Colonel Arturs Silgailis, the hill was successfully recaptured, and the Soviets turned their attention elsewhere.

The initial struggle that took place on March 16, 1944, is of extreme importance because it was the first time both divisions fought together during the same battle in the war. Further, it is the only battle in World War II history that was led solely by Latvian commanders. Therefore, March 16 was specifically chosen as the day to honor the Latvian Legion and its veterans.

Honoring the Latvian Legion in the 21st Century

The first commemoration of the Legion veterans took place on March 16, 1990 in Latvia. It wasn’t until 1998 that the country’s parliament voted to mark this day as a national day of remembrance. Ironically, the word â€˜legion’ was specifically excluded from the official name because everyone who fought against the Soviets during World War II and thereafter could be included.

By the turn of the century, Latvia’s parliament was forced to remove the date from its list of â€˜state remembrance days’ because of international pressure. The day was deemed a private affair of the veterans and their families. In the 21st century, the parade associated with March 16 is still viewed as controversial and confrontational. Nationalist organizations of Latvia support the Legion, whereas Russian groups protest the march.

In 2012, the Council of Europe’s Commission against Racism and Intolerance (ECRI) took it a step further and suggested that “the Latvian authorities condemn all attempts to commemorate persons who fought in the Waffen-SS and collaborated with the Nazis. ECRI further recommends that the authorities ban any gathering or march legitimizing in any way Nazism.”

Two years later, the UK Labor MEP Richard Howitt agreed. As a spokesperson for the European Parliament Human Rights Sub-Committee, he issued the statement claiming that “Whether local boys were forced to don the SS uniforms or were eager volunteers, celebration of their actions not only insults the memory of the victims but also honors Nazism itself.”

Some Latvians still consider the Nazis to be liberators despite systematically killing millions of Jews. It is estimated that 70,000 of the 85,000 Jews that lived in Latvia were murdered by the Nazis.

Riga was retaken by the USSR in 1944. The country finally separated from decades of Soviet rule in 1991 after the collapse of the Soviet Union. Ever since then, the parade has taken place in the Latvian capital.