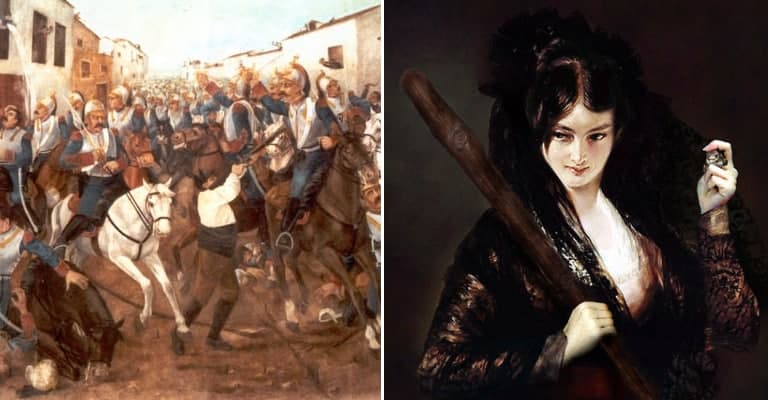 In 1807, the peninsula war began when the French armies of Napoleon and their Spanish allies invaded the Kingdom of Portugal. Spain quickly found itself the victim instead of the victor of the ill-fated endeavor when France turned against its former allies, taking over Spain’s territory and throne. However, the people of Spain did not take this invasion lightly and so began seven years of guerrilla warfare as Spanish insurgents took up the fight of the army, wearing down French resistance with their relentless, sporadic attacks.

These guerrilla fighters included otherwise ordinary men such as former farmer Francisco Espoz y Mina, lawyer, Joaquín Ibáñez, Baron de Eroles and Francisco de Longa, a blacksmith. They and many others took up arms after the French invasion. However, not everyone who resisted the French took to the hills. For in June 1808, one small town in La Mancha launched an unprecedented resistance of its own under the leadership of a twenty-year-old barmaid, Juana Galan.

Spain and the Peninsula war

In autumn 1807, Napoleon Bonaparte invaded Portugal, marking the start of the seven-year Peninsula war. Portugal was one of the staunchest allies of Britain and Napoleon wanted to curtail Portuguese military support to France’s old enemy. In the wake of his defeat at the battle of Trafalgar in 1805, Bonaparte was particularly concerned about the use of Portugal’s ports as safe havens by British ships- and the possibility of British use of the Portuguese navy. So he attempted to force Portugal to declare war on Britain. When Portugal refused, Napoleon and his Spanish allies invaded.

However, Napoleon had doubts about the staunchness of his Spanish allies. Spanish support of the French cause was becoming shaky -especially in the wake of Trafalgar. Civil unrest amongst the people of Spain and the weak rule of Charles IV was also destabilizing the Franco-Spanish alliance. In March 1808, the situation became critical when Charles was forced to abdicate, and his son Ferdinand took the throne. Napoleon had already decided that he would replace Charles with his brother, Joseph to ensure tighter control of the Spanish forces. Charles’ abdication expedited matters, and so Napoleon’s troops removed the hapless Ferdinand, placing Spain effectively under direct French rule.

However, the people of Spain did not take this attack on their sovereignty lightly. On May 2, 1808, the city of Madrid rebelled outright against the occupying French forces, leading to the massacre of hundreds of people by French troops. However, the uprisings spread. Cartagena and Valencia rebelled on May 23, followed by Zaragoza and Murcia on May 24 and Asturias on May 25. Further pockets of localized, spontaneous resistance also began to break out. Known as “little wars” or Guerrillas” in Spanish, these outlaw bands included former Spanish soldiers- and ordinary men and women.

The French met this resistance with a series of brutal reprisals. When in early 1809, the villagers of Arenas killed German mercenaries in the pay of the French army, the French retaliated by wiping the whole village out, raping women and killing children. Even before the events in Arenas, the sacking of churches, massacres in the street and the execution of those suspected of harboring guerilla fighters had become commonplace. Spain was no longer a partner in the Peninsula campaign- it was one of its victims.

However, such horrific incidents did little to quell Spanish resistance. Indeed, it only seemed to fuel it. So it is little wonder that when French troops finally reached the small town of Valdepenas in the province of La Mancha in June 1808 that they met with fierce resistance from the locals under the leadership of one local woman, Juana Galan.

Juana Galan and the Battle of Valdepenas

Until June 6, 1808, Valdepenas was just a quiet little town in La Mancha. However, it was not able to remain isolated from the events sweeping Spain for long. Following the May uprisings, the French command began to send troops across the country to quell further riots. By June 1808, a contingent of French riflemen and cavalry were on their way to Andalusia as act as reinforcements- and Valdepenas lay in their path. Most of the town’s men were away fighting Napoleon’s troops. However, if the French thought that crossing through Valdepenas would be easy, they were about to be proven very wrong.

Juana Galan was a twenty-year-old barmaid in one of Valdepenas’s best taverns. The tavern was a nexus point for travelers, who, as wine loosened their tongues would pass on all sorts of news and gossip. It was in this way that Juana heard of the approaching French troops. Juana was well aware that it was unlikely that the occupying forces were unlikely to pass peacefully through Valdepenas and leave it unmolested. This fact aside, she also realized it was imperative to the Spanish cause that they did not reach their destination. And so, even though failure would mean fierce reprisals for the whole town, Juana Galan hatched a plan of resistance.

Juana passed on her news to the remaining townsfolk. Then, she rallied the women of the town under her command, and together they set a trap for the approaching French army. As the soldiers reached the town, women positioned in the upper stories of houses dumped pots of boiling water onto the heads of the passing soldiers. Others poured cauldrons of boiling oil onto the roads to limit the passage of the cavalry. Then, while the French recovered from this surprising and painful welcome to Valdepenas, Juana sprang into action.

Juana led the rest of the women against the French troop, armed only with a baton or according to some versions a cast iron stew pot. None of the other women were any better armed. Despite this, bravery and determination won the day. In what became known as The Battle of Valdepenas, the women were able to beat back the soaked and overwhelmed French army. The troops retreated from Valdepenas, never to return.

The Legacy of Juana Galan

The brave actions of the women of Valdepenas under the leadership of Juana Galan on June 8 1808 meant that not only did Valdepenas escape the French but so to did the whole of the region of La Mancha for the time being. The battle also ensured that the French reinforcements never made it to their final destination, therefore aiding the Spanish in their decisive victory at the Battle of Bailen. This battle severely set back the Napoleonic cause in Spain, forcing the defeated general, Dupont to surrender 18,000 men and for a time the French abandonment of much of Spain. Bailen had the added humiliation of being the first ever open field defeat of Napoleon.

However, these victories were not to last. In November 1808, the French reclaimed Madrid from the Spanish and their allies and began a long war of attrition with the guerrilla forces across the rest of Spain. Some of the inhabitants on Valdepenas joined the guerrilla forces. Finally, in 1814 their effort paid off when the guerillas and their European allies finally liberated Spain from the French. King Ferdinand was restored to the Spanish throne. He personally acknowledged the bravery of Valdepenas, granting the town the title “Very Heroic.”

Sadly, however, Juana Galan or “La Galana” as she became known did not live to see this final victory over the French. On May 2, 1810, she had married a fellow resident of Valdepenas, Bartolome Ruiz de Lerma. The couple had two daughters together. However, on September 24, 1812, La Galana died, giving birth to her second child. On this same day, La Mancha was officially liberated from Napoleonic rule.

However, the legacy of La Galana lives on. Today she is remembered as a heroine of Valdepenas, commemorated by a statue in the town by Francisco Javier Galan depicting her armed with a baton. However, the fame of La Galana and her heroic efforts in the early part of the Spanish War of Independence have not been forgotten over the rest of Spain. For Juana Galan is remembered to this day as a Spanish patriot, a symbol of resistance against oppression and a feminist hero.

The French invasion of Spain, February-May 1808, History of War.org