Jack Johnson: The Most Controversial Black Man in America 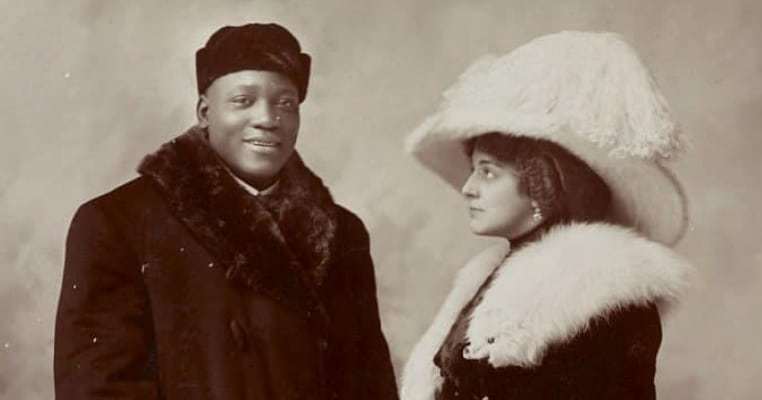 Jack Johnson: The Most Controversial Black Man in America

Segregation was strictly enforced throughout the Untied States at the onset of the 20th century. Jim Crow laws ruled in southern states and unwritten laws dictated the movement of African Americans in northern and western states. Anyone who stood up to racial injustices quickly found themselves the victim of crimes to which no authority pursued. Terror and violence ruled the nation, particularly in the South. Men and women were hung and left on display to show the power of what would happen if they seemingly disrespected a white person.

For a frail boy in Galveston, Texas, the racial violence was not apparent. He grew up poor with other black and white boys. The son of former slaves, John Arthur “Jack” Johnson as a boy fell in love with boxing. It became his life and in 1898 he made his professional boxing debut. Boxing paid well and soon Johnson was able to live a life that defied his imagined expectations. The boxer frequently visited brothels, married white women, gambled, and raced expensive automobiles. He never apologized for his lifestyle and lived in direct defiance of prescribed social norms in segregated America. Jack Johnson lived unforgivably as a black man.

Jack Johnson was the third of nine children and listed his birth date as March 31, 1878. After attending school for five years, Johnson found work on the Galveston docks and then worked his way to Dallas. At 16, he went to Manhattan and exercised race horses. When he was fired for over exercising a horse, he found work as a janitor in a boxing gym. Johnson fell in love with the sport and began learning whenever he could. He returned to Galveston and was arrested for playing in an illegal craps game. When he and his cohort were released, the two men fought each other in front of a large crowd. This post-jailhouse fight was the beginning of Johnson’s extensive boxing career.

Johnson turned professional 1898 and fought many famous African American boxers. When police arrested Johnson and Joe Choynski for illegally fighting on February 25, 1901, the men agreed to fight in the jailhouse each day in exchanged for spending the night in their own homes. Large crowds visited the jail to see the men fight behind bars. Later in life, Johnson credited Choynski with many of the skills that he developed during those jailhouse bouts.

Jack Johnson continued to box against numerous African American boxers. A hallmark of his boxing was his ability to trash talk his opponent in the ring as well as the spectators outside of the ring. His skill as a boxer drew people to watch him. Soon he was the Colored Heavyweight World Champion and he was amassing a fortune. Jack Johnson was never shy about displaying his wealth nor was he shy about frequenting brothels and marrying white women. Many viewed his lifestyle as deplorable and full of debauchery.

Johnson’s manager, George Little, took him to the exclusive Everleigh Club in Chicago’s Levee District on March 13, 1909. Little had long been a brothel owner and “levee czar” who collected protection payments that he passed along to the ward boss. At 6 foot 2 inches and 200 pounds, Johnson was a formidable figure in the club’s doorway. His $1500 diamond ring glistened in the candlelight and the girls were smitten with his charm. When Belle Schreiber was caught with Johnson the next day touring the streets of Chicago against the wishes of her employers, she was fired. For a few months, Belle was Johnson’s favorite girl until he met another woman. Perhaps feeling guilty, he gave Belle money so that she could open her own brothel.

Jack Johnson continued to live in an extravagant and controversial manner. As a boxer, Johnson continued to win bout after bout against other black boxers. It was time for him to fight the undefeated Heavyweight World Champion, the retired Jim Jeffries. When Jack Johnson and Jim Jeffries faced off in Reno, Nevada on July 4, 1910, throngs of people could hardly contain their excitement. In one corner was the former white boxing champ that represented the ideals of racial superiority and in the other corner was a black man that represented the hope that African Americans would overcome a segregated society.

Round 2: “The Fight of the Century”

Excitement grew as “The Fight of the Century” arrived. Finally, the first bell sounded and the fight began. After 15 rounds, Jim Jeffries threw in the towel and Johnson was proclaimed the winner. After the fight, Jeffries proclaimed that he “could not have whipped Johnson at my best.” As news of Jeffries defeat circulated throughout the nation, riots broke out in numerous cities including New York, Atlanta, and Houston. 20 people were killed while hundreds more were injured.

Jack Johnson earned $117,000 for his victory over Jeffries. The racial tension that the fight caused did not seem to adversely impact him. Johnson continued to live his life the way that he wanted to regardless of what other people had to say. Even his strongest critics knew Johnson was a very talented boxer, but his personal conduct concerned numerous segments of the American population. W.E.B. DuBois criticized Johnson for not doing more to uplift the race. Johnson never hid the fact that he visited brothels and preferred the company of white women, a taboo in most American social circles at the time.

President William Howard Taft signed the White-Slave Traffic Act of 1910 into law. Known as the Mann Act, it now was a felony to transport women and girls across state lines “for the purpose of prostitution or debauchery, or for any other immoral purpose.” The vague language in the bill made it possible for the policing of consensual behavior among adults. With a lot of prodding from people that felt Jack Johnson violated the social norms of American society, federal prosecutors charged the boxer with violating the White-Slave Traffic Act and he stood trial in 1912.

As Lucille Cameron, a white woman, prepared to marry Johnson in 1912, her mother insisted that Johnson had kidnapped her daughter, took her across state lines, and forced her to marry him. Johnson’s former lover, Belle Schreiber, was the federal prosecutor’s chief witness. An all white jury found him guilty and a judge sentenced him to one year plus one day in federal prison. Just before he was to report to serve his time, Johnson joined a waiting Lucille in Montreal. The couple married and left for France. They lived in a war-torn Europe before fleeing to South America and later Mexico.

Johnson and his wife returned to the United States in July 1920. As he crossed the border at Tijuana, offices took him into custody and sent him to serve his sentence in Leavenworth. On July 9, 1921, Johnson was released from prison and resumed his married life with Lucille. No longer willing to accept Johnson’s numerous infidelities, Lucille filed for and was granted a divorce in early 1924. By August 1924, Johnson had married Irene Pineau.

Jack Johnson’s controversial lifestyle remained a topic of conversation throughout his life. Civil rights activist believed that Johnson did little to advance racial tolerance. When a young black boxer from Detroit burst onto the scene and proclaimed that he would “never disgrace the race” Johnson was appalled. Jack Johnson bet against all of Joe Louis’s opponents and he even offered to train James J. Braddock. When Joe Louis defeated Braddock on June 22, 1936 to become just the second black boxer to earn the title Heavyweight Champion of the World, Johnson must have been furious.

Jack Johnson stopped at a diner in North Carolina. When he was unable to use his money and fame to get served, he sped away in anger. He crashed his car and was taken 50 miles west to the nearest hospital that would accept a black person. On June 10, 1946 Johnson died at St. Agnes Hospital in Raleigh. His body was sent to Chicago where he was buried in Graceland Cemetery. Years later a headstone was placed at his gravesite.

Even in death Johnson remained a controversial figure. For decades after his death family members attempted to get his Mann Act conviction expunged. The federal felony charge required action from the US Legislature or a presidential pardon. Several times legislation was passed but it failed to earn signatures from Presidents George H.W. Bush and Barak Obama. Then, on April 21, 2018, President Donald Trump, acting on the advice of boxer and actor Sylvester Stallone, tweeted that he was considering a full pardon for Jack Johnson.

Jack Johnson received a full presidential pardon on May 24, 2018. At the signing, President Trump stated that Johnson was “a truly great fighter” who served time for a “racially motivated” crime. Throughout the decades since the boxer’s death, debates brewed over Johnson’s conviction of the Mann Act. The debate over his ability as a boxer has, surprisingly, never been questioned. Perhaps its is fitting that a controversial president pardoned a controversial man who lived his life “unforgivably black.”

Unforgivable Blackness: The Rise and Fall of Jack Johnson. PBS.